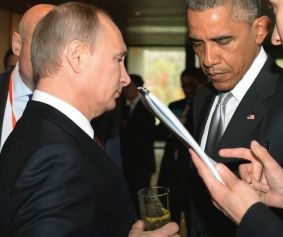 It is not a return of the Cold War – but, in a sense, it may be even more dangerous.

For more than four decades, the U.S. and its allies wrestled with a formidable enemy, one armed to the teeth, from nuclear weapons and delivery systems to the best propaganda-subversion network the world had ever seen. But Washington and the West tended to obscure the enormous vulnerabilities of the autarkic Soviet economy – even when periodically it came obsequiously soliciting a blood transfer from the capitalists. Perhaps that was why only a few Russians had anticipated its extreme vulnerability and why its sudden implosion came as such a surprise in the West.

But during those decades, there was never much doubt about what the issue was, what each side’s military capabilities were, or what both planned in the event of a breakout. It was labeled with that cliché, the balance of terror.

Today’s scene is much more unclear.

True, Russia’s weaknesses are much more apparent while Vladimir Putin increasingly challenges the West and its norms for worldwide peace and stability. There is one good reason: unlike the earlier era, this Moscow has sought and to some extent found economic integration with the world economy. So much so, in fact, that it has caught “the Dutch disease” – an overwhelming dependence on its vast oil and gas reserves for its relative prosperity compared to Soviet times. But the huge cash reserves for its gas exports to Western Europe only disguise its weaknesses and may be on the verge of rapid dissipation.

For in reality the Russian state today suffers all the ills of a descending power. A catastrophic decline in the birth rate has driven Russia toward a smaller and smaller population, as much as a third by 2050. Perhaps the dip in population just now but continuing over the long run with a particularly high death rate for males from accidents and alcoholism. (Recent small blips of population increase are Russian ethnics returning to the “homeland” from former Central Asian non-Slav Soviet “republics”). Urbanization and the creation of a pampered elite disguise the abandonment of village economies and agriculture. Even its massive fossil fuels exports are based on antiquated and inefficient exploitation, with crumbling pipelines and depleting oilfields, increasingly dependent on foreign technology as it hopes for new oil finds in the Arctic.

Vladimir Putin, like his predecessor Boris Yeltsin, has promised reforms on all fronts. These include pumping up the once proud heritage of the Soviet military. But while he has initiated an ambitious rearmament program, it has not solved its traditional defects (disciplinary abuses, for example) of the Russian military nor moved successfully as promised repeatedly to an all-volunteer force. Whether in the brief war against Georgia or in its covert aid to the pro-Moscow rebels in Crimea and the eastern Ukraine, these deficiencies have been manifest.

All this explains why relatively minor sanctions of the U.S. and the EU against Russian aggression in Ukraine have impacted so heavily on Moscow. The massive outflows of capital, always a problem because of the unstable political scene and which saw favorite oligarchs suddenly become enemies of the state, have soared. The stock market has soured, now short of foreign capital and with domestic investors scurrying abroad. And the ruble has tumbled against the dollar.

But none of this has slowed Putin’s bombastic claims to regain for Russia the superpower status of the failed Soviet Union. (After all,  he has said the collapse of the Soviet Union was the greatest tragedy of the 20th century.) He has ignored advice of former trusted economic advisers warning of the growing impact of Western economic warfare. In part, this has been because his “victories” in Georgia, Crimea, and continued abetting of the civil strife in Ukraine itself have generally been supported by the new Russian elite, as chagrined as he at the second-class power status Russia had fallen into after 1990. A jingoistic – and largely government controlled media – have also spurred him on.

But in a sense, Putin is being sucked into a vacuum created by the Obama Administration and the European Union’s only lackluster effort to halt the first new European aggression by a major power since World War II. Rather than send all possible military support to the besieged Kiev regime, whose forces, unexpectedly, performed reasonably well against the Ukrainian rebels and their Russian managers, Washington, Berlin and Brussels have negotiated toward a loose federal Ukrainian state Moscow could manipulate and pull back into its orbit.

That has emboldened Putin – playing to his domestic claque – to make increasingly aggressive gestures, whether bomber patrols off North America or Russian warships in the North Sea. The old Soviet (Putin’s own political ancestry in the NKVD/KGB) espionage intrigues have surfaced on the Lithuanian border, one of the three Baltic States looking to many observers as his next target in his attempt to reconstitute the Soviet empire.

The issue at the moment is not just the question of what either side will do next. That is, will Putin push for further concessions from Poland, the Baltic States, and Finland? Or will he be content to huff and puff until the weight of the falling world energy price finally sinks the Russian economy? That could come quicker than many anticipate in the always-unpredictable world oil markets.

The Saudis with their huge reserves publicly claim the current falling worldwide energy prices are only temporary. (That was after rudely and uncharacteristically refusing all media coverage of the recent OPEC conference, which failed to curb production in order to bolster prices.) Their interest may be in a world oil price that would undercut the higher expenses of American shale production.

Their prophecy, if sincere, seems unlikely. Not only has the shale revolution in the U.S. (and now spreading abroad] given the American economy a fillip and virtually halted net energy imports), it threatens to turn into a weapon to finally establish a uniform world gas market at cheaper prices). Despite all the problems of the Mideast, new or reinvigorated Iraqi, Libyan and Syrian oil is reaching world markets. Even Iran, living with its own faltering sanctioned regime now somewhat diluted by the Obama Administration and Europe, is pushing sales. But their hottest new market, China, is slowing imports with what looks to be as a concomitant of their long-term slackening of spectacular growth of the past three decades. With much of the world in economic doldrums, consumption promises to remain relatively slowly increasing for some time at least. All this means lower real fossil fuel prices for the foreseeable future.

Russia’s high cost production will increasingly be the victim of this more liquid worldwide energy market. At that point, does Putin pull in his horns, or will he be tempted to believe his own propaganda and make other dramatic aggressive feints? And if so, what will the West – now led from behind by a recalcitrant Obama Administration – do?

And, most of all, will both sides read the other’s actions correctly, avoiding an escalating clash?