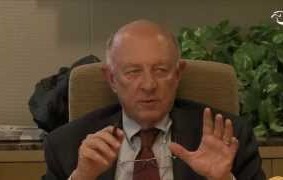 The meeting was supported by Artemis Strategies, andsponsored by the newly established EMP Coalition-of which Mr. Woolsey is the Honorary Co-Chair along with former House Speaker Newt Gingrich. To view briefing charts of Amb. Cooper, click here. A YouTube video CLICK TO PLAY of the 2-hour conference is included below.

* An EMP catastrophe also can be created by rogue states armed with nuclear weapons.  North Korea already has nuclear missiles and nuclear weapons; Iran nearly so-and these two rogue states actively collaborate on both nuclear and ballistic missile development.  It is also plausible that Jihadi terrorists might get their hands on a nuclear weapon-especially if Iran gets such a capability, mate it to a short range ballistic missile they can easily buy and launch it from a vessel off our coasts and detonate it over the U.S. to create a lethal EMP.

* A single nuclear weapon detonated at high-altitude over the center of this country could collapse the electric grid, leading to the collapse of other critical infrastructure and within a year lead to the death of several hundred million Americans. Based on extensive Department of Defense efforts during the Cold War, we (specifically, the Defense Nuclear Agency and the Services) understand EMP effects and how to protect against them, and we have applied these protective measures to harden our strategic systems-but not to harden our critical civil infrastructure.  A high altitude nuclear explosion creates an EMP with three wavelength components, a mid-range one that is essentially the same as lightning, a short wavelength one that can cause severe damage to solid state electronics, and a long wavelength one that is essentially the same as that from a solar storm which would couple into the electric power grid that would transmit a massive energy pulse through the grid to focus on a few thousand large transformers, which when severely damaged would require many months to repair-if ever.

* Effective ballistic missile defense (BMD) systems are needed to defend against these threats. But no defense is perfect, so an attacking missile could get through and detonate its weapon above the U.S. (Note that a high altitude nuclear explosion will not immediately kill lots of people-it primarily will turn out the lights and everything dependent of electric power, possibly for an indefinite period.)  And since BMD systems provide no protection against a massive solar storm, it is very important to harden the electric power grid to assure that damage from either an EMP attack or a massive solar emission can be repaired and our critical infrastructure reconstructed before major fatalities result from the failure of our just in time economy.  More on this point, below.

* North Korea probably already can launch a catastrophic EMP attack-and not only with ICBMs that approach the U.S. over the North Pole, for which we have deployed a limited BMD system. North Korea has also launched its so-called Space Launch Vehicle to their south, over the South Polar region, to approach the U.S. from the south.  Like the Soviet Fractional Orbital Bombardment System (FOBS) – invented by the Soviets in the 1960s to bypass U.S. Ballistic Missile Early Warning radars (BMEWs) and missile defenses to attack the United States. The U.S. has no BMEWs or BMD interceptors facing south.  Iran has also launched satellites to their south-but they are thought not yet to have nuclear weapons. Ending this complete vulnerability can be helped by at-sea Aegis radars and interceptors-and by deploying Aegis Ashore and a BMEWs radar near the Panama City, Florida.

* The North Korean freighter Chong Chon Gang was intercepted a couple of weeks ago in the Panama Canal and is still being inspected in Panama.  The Panamanians stopped the vessel (which earlier this year made stops in China and Russia), suspecting it of drug smuggling, and discovered in its hold two nuclear-capable SA-2 missiles.  Although these missiles were without nuclear warheads, the incident is disturbingly suggestive of the EMP Commission’s nightmare scenario of a nuclear EMP attack launched from a vessel off the U.S. coast, to conceal the identity of the attacker and escape retaliation. We are still vulnerable to this attack scenario, especially from the Gulf of Mexico. We know how to defend against these ballistic missile attacks, for relatively small funding requirements.  Indeed, we are already building, in the next two to four years, Aegis Ashore sites in Romania and Poland to protect our NATO allies from Iranian missiles-we can surely afford to build the same defenses for the American people on the same timeframe, probably for less money. Such sites could also help defend folks along the Eastern Seaboard-and our existing Aegis ships operating or in port along our eastern seaboard can defend Americans who live there if they are prepared and trained to do so.

* Hundreds if not thousands of electric utilities in the United States thus far have not acted to protect themselves (and their subscribers) from EMP, and might not be expected to do so voluntarily because national defense and homeland security is a U.S. federal government responsibility.  Indeed, our federal government is dysfunctional and doing little if anything to lead a serious response to harden the electric power grid. If you watch nothing else in the YouTube video of our conference, I urge you to watch Jim Woolsey’s eloquent explanation at the beginning of the video to better understand why this problem exists.  This discussion leads directly to the reason the House EMP Caucus is supporting the proposed Secure High-voltage Infrastructure for Electricity from Lethal Damage (SHIELD) Act to protect the national electric power grid. In addition, the Department of Homeland Security should develop a new National Planning Scenario focused on EMP to guide all government efforts in countering EMP.

* This condition should be considered in the context of thousands of cyber attacks daily, via computer viruses and hacking to probe U.S. critical infrastructures, searching for weaknesses. These attacks, justifiably receiving increased attention, should account for the known foreign military doctrines of potential adversaries such as Iran, North Korea, China and Russia. They all include acts of sabotage and kinetic attacks – including nuclear EMP attack – as part of their planning for an all-out Information Warfare or Cyber Warfare Operation.  Notably, a sabotage attempt last April against electric grid transformers near San Jose, CA, damaged five transformers with fire from AK-47 assault rifles.

* “Connecting the dots” between ongoing cyber attacks, sabotage by AK-47s, a North Korean freighter carrying nuclear capable missiles in the Caribbean should warrant a serious effort to protect the nation’s electric grid. But, for my part, I remain skeptical that Washington will anytime soon overcome its dysfunctional lethargy and urge instead that state and local authorities undertake locally generated initiatives to harden the grid in their respective states.  Then maybe powers that be in Washington will eventually live up to their oaths to provide for the common defense.

* With this bottom line in mind, I again applaud Maine Representative Andrea Boland (D-Sanford) for her initiative in getting almost unanimous approval for her Act to harden the electric power grid in Maine against natural and menmade EMP.  Notably, she is leading a session at the August 12-15 Summit of the Council of State Legislators in Atlanta to discuss the EMP issues and what they can do to protect their citizens.  She will be joined by several others of our EMP Coalition in informing these key representatives from all over America about the problem and what they can do to deal with it. Hopefully, other states will not wait for Washington, but follow Maine’s example and undertake state initiatives to protect their electric grids from EMP now.