The EU’s ‘Eureka’ Moment on the Jihadists 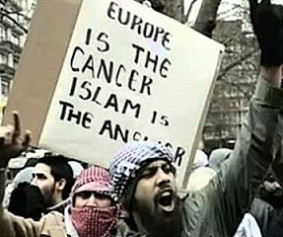 In October 2012, Hezbollah’s second-in-command, Naim Qassem, declared in Beirut: “We don’t have a military wing and a political one. We don’t have Hizballah on one hand and the resistance party on the other. Every element of Hizballah, from commanders to members as well as our various capabilities, are in the service of the resistance and we have nothing but the resistance as a priority.”

The EU’s willful blindness towards jihadist organizations, be they Sunni or Shia, is motivated by greed. Buying Iranian oil and gas and selling Iran “dual use” products, which are sanctioned by the U.S., has always had a priority over security.

It took the EU 30 years plus last year’s bombing in Bulgaria, and a plot to assassinate Israeli and other diplomats in Cyprus to designate Hezbollah’s “military wing” as terrorist.

While Hezbollah and Iran publicly denounce the designation, stating, “It appears that the decision was written with an American hand in Zionist ink,” they must be celebrating the EU’s stand against the U.S. demands to ban all the activities of the organization. Indeed, Hezbollah members and sympetizers, with license from the EU to continue fund raising in Europe must be laughing on their way to the banks to deposit money to pay for its “military wing’s” activities. This, however, was not noted by the media.

Not surprisingly, an important EU report regarding jihadi terrorism received no media coverage in Europe or the U.S.

A lengthy report, “The Involvement of Salafism/Wahhabism in the Support and Supply of Arms to Rebel Groups Around the World,” was published last month by the Policy Department of the European Parliament’s Directorate-General for External Policies.

Incredibly, the European Parliament had a eureka moment that led to the public admission that Saudi Arabia and the Gulf Sates are responsible for the enormous flow of funds and arms to terrorists worldwide.

This is surpising because for decades the Europeans failed to admit the Islamist threat. This was done under the false belief that Europe could keep jihadist away by denying their threat. This twisted logic has been further justified with Europe’s close proximity to the Muslim world and its tens of millions of unassimilated Muslim immigrants.

Does the European Parliament report signal a shift in European mentality?  Doubtful. To the best of our knowledge the report was not ballyhooed in the slightest.  It is most likely to be buried and more or less officially ignored.  The principal clue to this prediction is the EU’s recent action regarding Hezbollah.

Murtaza Haider, a Canadian writing for Pakistan’s Dawn, gives what amounts to a Pakistani take on the European Parliament report. It is hard to argue with the Pakistanis who argue that West cowardice stems from their greed and wrongheaded self-interests.

It is not merely the faith or oil that flows out of Saudi Arabia. The oil-rich Arab state and its neighbours are busy financing Wahabi and Salafi militants across the globe.
A recent report by the European Parliament reveals how Wahabi and Salafi groups based out of the Middle East are involved in the “support and supply of arms to rebel groups around the world.” The report, released in June 2013, was commissioned by European Parliament’s Directorate General for External Policies. The report warns about the Wahabi/Salafi organisations and claims that “no country in the Muslim world is safe from their operations … as they always aim to terrorise their opponents and arouse the admiration of their supporters.”

The nexus between Arab charities promoting Wahabi and Salafi traditions and the extremist Islamic movements has emerged as one of the major threats to people and governments across the globe. From Syria, Mali, Afghanistan and Pakistan to Indonesia in the East, a network of charities is funding militancy and mayhem to coerce Muslims of diverse traditions to conform to the Salafi and Wahabi traditions. The same networks have been equally destructive as they branch out of Muslim countries and attack targets in Europe and North America.

Despite the overt threats emerging from the oil-rich Arab states, governments across the globe continue to ignore the security imperative and instead are busy exploiting the oil-, and at time times, blood-soaked riches.

The European Parliament’s report though is a rare exception to the rule where in the past the western governments have let the oil executives influence their foreign offices. From the United States to Great Britain, western states have gone to great lengths to ignore the Arab charities financing the radical groups, some of whom have even targeted the West with deadly consequences.

While the recent report by the European Parliament documents the financial details connecting the Arab charities with extremists elsewhere, it is certainly not the first exposition of its kind. A 2006 report by the US Department of State titled, International Narcotics Control Strategy Report – Money Laundering and Financial Crimes, reported that “Saudi donors and unregulated charities have been a major source of financing to extremist and terrorist groups over the past 25 years.” One of the WikiLeaks documents, a cable from the US Consulate in Lahore also stated that “financial support estimated at nearly 100 million USD annually was making its way to Deobandi and Ahl-e-Hadith clerics in the region from ‘missionary’ and ‘Islamic charitable’ organisations in Saudi Arabia and the United Arab Emirates ostensibly with the direct support of those governments.”

The European Parliament’s report estimates that Saudi Arabia alone has spent over $10 billion to promote Wahabism through Saudi charitable foundations. The tiny, but very rich, state of Qatar is the new entrant to the game supporting militant franchises from Libya to Syria.

The linkage between Saudi-based charitable organisations and militants began in the late 70s in Pakistan. A network of charitable organisations was setup in Pakistan to provide the front for channeling billions of dollars to fight the Soviets in Afghanistan. Since then the militant networks have spread globally, emerging as a major threat to international security. Charlie Wilson’s War, a book by George Crile that was made into a movie, details the Saudi-militancy nexus as well as Ahmed Rashid’s Taliban.

While ordinary citizens in Afghanistan, Pakistan, and other countries have suffered the deadly consequences of militancy supported by the Wahabi and Salafi charitable organisations, the Saudi government had remained largely dormant. This changed in 2003 when militants attacked targets in Riyadh. Since then, the Saudi government has kept a close watch on the domestic affairs of charities, making it illegal to sponsor militancy, but the government has done precious little to curtail activities by Saudi charities abroad. In fact, evidence, as per the European Parliament’s report, suggests that Saudi and Qatar-based charities have been actively financing militants in Egypt, Syria, Libya, Mali, and Indonesia.

Pakistan has suffered tremendously over the past three decades from domestic and foreign inspired militancy. The Soviet invasion in Afghanistan and the US-backed Afghan militancy forced Pakistan into a civil war that has continued to date. The faltering Pakistani economy did not help. Successive governments have rushed to Saudi monarchs asking for loans and free oil in times of need. However, Saudi money comes bundled with Saudi propaganda and a license to convert Pakistanis to a more ‘puritan’, read Wahabi, version of Islam.

In late the 70s, Iranians also intensified their influence in Pakistan. While hardline Sunnis were being radicalised by the Wahabi influences from Saudi Arabia, Iranian influence on Pakistani Shias was also increasing. And whereas Pakistan did not need any further radicalization of its people, the Saudi-Iranian tussle spilled into the streets of Pakistan with devastating consequences for religious minorities and liberal streams of Sunni Islam.

At the same time, the economic collapse in Pakistan forced many to find jobs abroad. Millions of Pakistanis left for the Middle East, especially Saudi Arabia. While the remittances kept their families and the Pakistani government afloat, the migrant workers returned to Pakistan after being radicalised during their stay in Saudi. They became the brand ambassadors for the Saudi-inspired Wahabi flavours of Islam, thus expediting the pace of radicalisation in Pakistan.

Pakistan was equally vulnerable to foreign influences after the devastating earthquake in 2005 and floods in 2010 and 2011. The European Parliament’s report revealed that these disasters provided Saudi and other Arab charities to channel millions of dollars in aid, of which an unknown amount was used to fund militant organisations who have broadened their reach in Pakistan resulting in over 45,000 violent deaths in the past few years alone.

Pakistanis have a very strong spiritual link with Saudi Arabia. However, they are suffering for the unbound devotion to the oil-rich state, which has done a poor job of curbing the financial support for militancy in Pakistan. Seeing the plight of violence stricken Pakistanis, one hopes that Saudi charities could be more charitable.

*Murtaza Haider, Ph.D. is the Associate Dean of research and graduate programs at the Ted Rogers School of Management at Ryerson University in Toronto.