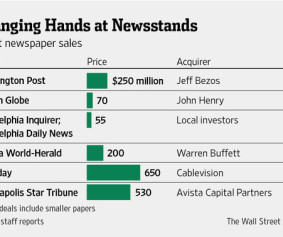 “In the good old days” a reader’s world was filled with newspapers, several coexisted competitively in a single urban area and even in the rural hinterlands. The choice for a subscriber for dawn home delivery by a boy on a bicycle or picked up at the local newsstand en route to work was based on one’s “worldview,” however vague. It was a filter for what was then considered a welter of reporting of events out there in the wide world, although in America before World War II largely confined to North American happenings.

Needless to say, that day is long since going, going, gone, for an institution that has been with us for three centuries, or maybe even earlier if you count something the Chinese, as usual, invented along with movable type. But it was not until the 19th century that newspapers took on the importance that The American Founders ascribed to them. That was summed up in Thomas Jefferson’s famous dictum: “The basis of our government’s being the opinion of the people, the very first object should be to keep that right; and were it left to me to decide whether we should have a government without newspapers, or newspapers without a government, I should not hesitate a moment to prefer the latter.” Jefferson was writing to a fellow Virginia politician to endorse the adoption of the Bill of Rights, the first ten amendments to the Constitution including guarantees for freedom of the press. They were designed to meet the objections then–and now–of those who opposed big government and feared its depredations.

But even Jefferson, later, as president and the object of vitriolic and often personal newspaper attacks, was to denounce their perniciousness, especially after his brief love affair with the French Revolution. The idea, so often floated by misguided historians as well as journalists, is ridiculous that American politics has not always been infused with unlimited invective and lack of compromise. And America has had periods of a highly partisan press before. But what characterizes our contemporary scene is the unanimity of view, the lack of original reporting (or opinion), and the ultimate in the wolf-pack syndrome.

In fact, the current sycophancy–to use the most polite term–of the Washington media in lapping up Obama Administration propaganda is rare in the annals of American journalism. For the press, of course, has always played a central role as critic. As early as the late 18th century in Europe the term “the Fourth Estate,” was applied to the then printed news reports as an informal institution of government, the others being the nobility, the clergy and the burghers or town leaders. It was an ever-questioning press that often kept the balance in the highly complicated juxtapositioning that The Founders wrote into the Constitution to preserve America’s unique individual freedom, even as compared with Mother England.

That’s why the sale of The Washington Post is a thunderclap in the growing demise of this critical institution of the past. For whatever the incredibly successful and innovative Amazon’s Jeff Bezos does with his purchase, it will not be a conventional American newspaper. The death of the national capital’s only for-profit daily is symptomatic of what is happening to newspapers throughout the country with falling circulations and collapsing advertising revenues. (I exclude The Washington Times which continues to be highly subsidized by the Rev. Sun Myung Moon’s Unification Church and its business affiliations, and The Washington Examiner which appears to be on life-support from its wealthy owner.)

Dropping a daily appearance, combining distribution and other services among themselves with special legal anti-monopoly protection, and changing formats to more sensationalist or other editorial gimmicks have not been enough. The New York Times, once the nation’s journal of record, is retreating. The calamitous sale of the Post’s relatively recently acquired The Boston Globe is a portent of future events. The Post still preserves its role as the unofficial leaker for government in Washington. But it has abandoned all pretense, not only at objectivity, but any attempt to present a rounded menu of daily events. How long its semi-official role will continue, one asks, if a sitting president uses a late night comedy show to make a statement on the closing of two dozen embassies around the world in the face of terrorist threats? Nor is their much hope for the current pattern of Internet publication subsidized by their print owners.

No, newspapers as we have known them are not long for this world.

In many ways, The Washington Post’s recent history as a prominent publication was not that of most great American newspapers which once rolled up enormous fortunes for their, usually, family owners, as much as anything else from the simple “want ad”. It began its prominence as a plaything for the somewhat frenetic wife of a wealthy New York banker. The drain, apparently considered insurmountable recently, has been too much for the scion of bankers.

When future histories of the 20th century are written, some of the newspaper’s legendary successes are likely to be seen in a quite different light. “Watergate” was, indeed, “a second rate burglary.” The newspaper’s pursuit of it coupled with mishandling by the Administration drove Richard Nixon from office. Probably one of the most astute if unsympathetic presidents, it was a tragedy. Historians will remember some of the footnotes of the Nixon legacy: for example, his decision not to contest the obvious 1960 Chicago election fraud that gave the presidency to John F. Kennedy, even at the urging of all his advisers. It spared the nation a constitutional crisis. One can only speculate in that rather useless fashion what a Nixon presidency rather than the flamboyance if total policy inadequacies of “Camelot” would have meant for America. But as Frederick Engels wrote, history repeats itself, first as drama, the second time as comedy. Florida’s 2000 “hanging chads” was adjudicated by the Supreme Court rather than the House of Representatives as required by the Constitution, again with a turn of events one could speculate on endlessly.

Replacing The Washington Post and other newspapers’ traditional role is the cacophony of the Internet with no filters at all. Virtually anyone, any time, with whatever lack of training (or talent) can and does mount his own perch to shout. (A case in point: my own website!) Worse, so-called “aggregators” collect these important pieces of information and opinion or the constant drivel of trivia, as the case may be, often used as bait for something very akin to the old-time snakeoil salesman. Lies, exaggerations, prejudice, misinterpretations are as ever the commodity of the day.

As always, technology is neutral, and so is the incredible miracle of the Worldwide Web. It permits research and communication in a way no serious newspaperman could have dreamed even a decade ago. But, as never before, the vast flow of words often turns into very modest contributions to the popular culture. Furthermore, it becomes a tool for everything from extortion to Islamist terrorism.

The audience, of course, is slippery. Most Americans under 35 never got “the newspaper habit,” the ritual of reading a newspaper either at breakfast or en route to work in mass transportation or hearing it quoted on a car radio. Blaring contemporary music–a recent Dutch technical musicology study showed how it increasingly abandons the accoutrements of Western music–generally replaces the search for information about what is going on in the world. The ultimate descent into semi-illiteracy may well be The Twitter.

On a good day, one can believe that–since we are only at the beginning of the vast digital revolution–we are seeing the birth of new and beneficial modes of communication. The new newspaper with enormous benefit for our culture and governance may be developing in a way no one now can predict. But we appear to be some time away from that–although in a world that appears to move ever more quickly, we do not know even that.

A version of this column is scheduled for publication Monday, August 12, 2013, at worldtribune.com