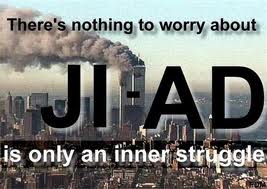 The president of the United States is jeopardizing national security with his public and his executive team’s cutting the umbilical cord of jihadist terrorism to Islam.

By refusing to identify the terrorists as a part, however pernicious, of the overall Muslim community, he makes it difficult if not impossible for the kind of counterintelligence necessary to avoid such catastrophes as the Boston Marathon bombing.

Contrary to his characterization, the Boston episode was not a “tragedy” – that is, an event inevitably driven toward its awful conclusion. It was a plot by a group of psychopaths [we are increasingly learning it stretched beyond the two individuals directly involved] that could have been prevented. But those lunatics follow a particular set of leaders and teachings which, however twisted and misconstrued, arise out of the tenets of only one great modern and universal religion, Islam.

The terrorists’ machinations would have been foiled had U.S. authorities followed a number of clues about their activities and investigated their backgrounds as likely radical Islamic suspects here and abroad. Existing immigration laws were ignored, in part, because of a “politically correct” attitude, prevalent in the highest echelons of the Obama Administration, which refuses to acknowledge that terrorism in our day for the most part is peculiar to Islam and Muslims.

The irony is that the U.S. sacrificed repeatedly in recent wars to defend Muslim minorities against oppression in Bosnia, Kosovo, through aid to the Palestinians, and, of course, in Iraq and Afghanistan. Yet, the Obama administration continually feels it incumbent–in order to avoid the accusation of being anti-Muslim, or “Islamaphobic”–to deny the implicit connections between the jihadists and the Muslim community as a whole.

There is no better example than the Boston Marathon bombings. The Tsarnaev family, whose sons perpetrated the outrage, as Chechens were given U.S. asylum–because of Washington’s sympathies for the Chechen cause against Moscow’s several centuries of colonialist depredation in the North Caucuses. Apologists for the administration’s continued attempts to isolate the Boston events from the continuing worldwide jihadist war against the U.S. are putting the accent on the Chechen nationalist aspects of the killers rather than their radical Islamic liaisons.

The illogic of this argument is apparent: why would Chechen radical nationalists turn on Americans who have been sympathetic to their cause, despite their horrendous terrorist attacks on Russian civilian targets? Obviously, they are adherents to a smaller but growing radical Islamist current among Chechens in Chechnya and in the extensive Chechen diaspora of which this family was a part.

These Boston Marathon bombers have inaugurated what is obviously a new era of the continuing war on terrorism (and despite, again, the Obama Administration’s refusal to adopt the Bush administration’s nomenclature, it is a full-fledged conflict between the U.S. and its non-state and state-supported enemies.) They have successfully demonstrated how a small group of individuals, operating on low budgets with amateurish tradecraft, can create a dramatic and painful terrorist strike.

In this new era, the only adequate defense of the American population will be counterintelligence–that is, a massive, intensive and extensive search for people who are plotting such attacks before they can initiate them. The reason is clear: America’s open society is extremely vulnerable to such attacks. Our tens of thousands of open sports events and traditional public celebrations offer unlimited opportunities for such murderous assaults.

Only by a continued investigation of possible sources of such attacks and anticipating such plots can the U.S. public be defended and normal American life continue, the destruction of which is the ultimate goal of the terrorists. Increased on-the-spot surveillance replete with additional (and increasingly expensive) uniformed security personnel, undercover agents and police dogs at vast public events would never be sufficient to prevent such attacks as the situation at the Boston Marathon proved.

Seeking to uncover hidden jihadists among the general Muslim population, unfortunately, it is a slippery slope that does, indeed, threaten traditional American civil liberties (not “privacy” which is a newly conceived constitutional concept). But the New York Police Department with its penetration of Muslim organizations at home and abroad–thus warding off more than three dozen potential attacks since 9/11–indicates what must be done. Those techniques are now under attack by well-meaning civil libertarians who refuse to recognize the necessity for examining potential threats masquerading under legitimate auspices in mosques, Islamic associations, even so-called anti-terrorist Muslim organizations which have in some cases wormed their way into advising U.S. government agencies.

The pattern of infiltration is familiar. We learned about such techniques during the Cold War when the U.S. was under attack from secret Communist agents working for the Soviet Union. Now as now, we may find adversaries even embedded in our own bureaucracies.

Not only is the process made difficult by the problem of protecting the rights of the great majority of the U.S. and foreign Muslim populations who are not involved in terrorist activities, but it faces particular and peculiar characteristics of Islamic society. No other modern interpretation of a major religion contains widespread advocacy of taqiyya–religious sanction for lying to infidels, non-believers in Islam –andkitman–religious obligation not to reveal the whole truth in a given situation, pre-modern restrictions against women’s rights, and advocating drastic retaliation including death for apostates. These give a religiously based sanction for some Muslims, often fearful of their own safety, for obfuscating the terrorists’ activities.

In the name of tolerance and to prevent any backlash against Muslims from terrorist acts by their coreligionists, the president and his cabinet –especially CIA director John O. Brennan (whose public statements have confused the issue but who would head up the necessary counterintelligence program)–have gone out of their way to define Islamic religious practices in ways that are acceptable to secularists and other religions. But they give cover and add to the deceptive practices of those who would use their radical definitions of Islam to cover their murderous activities.

The most glaring example is that of President Obama’s incompetent Secretary of Homeland Security Janet Napolitano continues to label the November 5, 2009, Fort Hood shooting–where a single gunman killed 13 people and over 30 people were injured, the worst shooting ever to take place on an American military base–as “workplace violence.” By doing so, she obscures the search for a history and the mistakes in refusing to recognize the sole suspect in that event, Nidal Malik Hasan, a 39-year-old U.S. Army major serving as apsychiatrist during his extended career, as potential jihadist murderer. That was despite all the evidence reported by his colleagues during his six years at Walter Reed Hospital. Hasan has still to be brought to justice, with a military trial scheduled to begin at the end of this month where he, presumably, will continue not to be labeled a terrorist. Surely this travesty must be examined in its own light to prevent future similar murders.

One can only assume the best intentions on the part of the president and his team: that is, they hope that by refusing to identify Muslim terrorists as members of a particular religion–however atypical they may be among the majority of their coreligionists–we will avoid a worldwide conflict between the West and the world’s 1.3 billion Muslims.

That avoidance of  “a clash of civilizations” is a worthy pursuit. But to continue to pursue it under the present rules of the game is to risk an undetected wave of such episodes as the Boston disaster.

*A version of this article is scheduled for publication Monday, May 6, 2013, in the World Tribune.