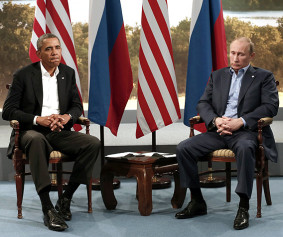 There is presently about as much confusion as when the U.S. entered The Cold War against the Soviet Union in the late 1940s. But there are fundamental defining differences to what is likely to be an equally long and complex new struggle between the U.S., its allies and Moscow.

The two engagements do share one commonality: American leadership now as then has been slow to face up to the task before it. It’s far too easy now to forget just how many times Josef Stalin signaled his forthcoming unrelenting war on The West before democratic statesmen understood what they faced and mobilized to meet it. [And here,
mea culpa. I admit shamefacedly as a young, idealistic, naïve student I wrote a U of Mo Jay School classroom harangue [alas! printed in the

Columbia Missourian] denouncing Winston Churchill’s March 1946 “Sinews of Peace” speech, at nearby Westminster College. Back from our victorious however bloody war in Europe and Asia, I was sure like most that a new era of relations among nations had begun, that the old balance of power collisions were now a thing of the past. It was then, of course, the British statesmen who whatever his numerous strategic mistakes this time with great clarity defined the issues and coined the term “iron curtain”.]

Churchill knew that the word had gone out to Communist apparatchiks worldwide that the Soviets were grasping for world domination. Even now almost every month brings more evidence of the enormous influence of their coterie in the highest echelons of Western government and among intellectuals helping to disguise and confuse the issues. Yet it was at a time when Moscow was constantly revealing its hand. Whether it was the last minute snatching of Manchuria and northern Korea and Japan’s northern islands, the usurpation of the Polish government-in-exile, Moscow’s attempt to set up a new Azeri satellite in northwest Iran, an attempted Communist coup against still “unrecognized” Indonesian nationalists, Communist exploitation of an insurrection in India’s Hyderabad [Deccan] state, the revelations of penetration of the Australian Labor Party, the attempt to install Communism in Greece — Stalin was pushing the Comintern’s envelope everywhere.

Only with the dramatic resolve – and what was ultimately to be the Soviet downfall, superior American technology – following the Berlin Airlift in 1948 was there a full awakening. Washington backed off Soviet efforts to force the U.S. and its Western partners out of bifurcated Berlin. Suddenly it became crystal clear to all and sundry that the struggle was joined and would have to be resolved only by the ultimate victory of one party or the other.

Even then, Henry Kissinger’s 1969-1980 “détente” [from the French “a relaxation”] again obscured the issues for a decade. It was not until the advent of Ronald Reagan and his clear-eyed identification of “the evil empire” with his matching tactics that Communism was met again head-on and defeated – as much from its own “internal contradictions”, as the Communists would have said, as outside pressure.

Lack of that Communist ideology or for that matter any ideology characterizes the current contest. Putin’s turn to an age-old amorphous appeal to romantic Slavic “exceptionalism” opposed to Western European humanism is a weak reed. Despite Putin’s labeling the implosion of the Soviet Union as the greatest tragedy of the 20th century, Communism today has no appeal beyond Pyongyang’s traditional Oriental Despotism [into which Lenin warned Soviet rule might degenerate], an increasingly nominal adherence by an ideologically rudderless China, and the kleptocracy of Vietnam.

Putin is not only bereft of ideology, the Russian leader bluffs his way from move to move. But that is not to say he is not for the moment successful. Nor is to be forgotten how often Hitler in the 1930s was  bluffing, but how often the feint was successful. From his 1936 “unilateral” remilitarization of the Rhineland in defiance of the Versailles and Locarno Treaties, when he told his anxious commanders they would withdraw if France opposed them militarily, Hitler bluffed. Nor was it clear to most at the time that his domination of Czechoslovakia by gnawing at it through Sudetenland. – “protecting’ German-speaking ethnics much as Putin claims he has done in Crimea and threatens in Ukraine proper – meant he was securing the best Skoda arms for another division to strike at Poland in September 1939, initiating World War II.
Putin, of course, is not Hitler. His jerrybuilt post-Communist economy is not the war machine 19th century delivered to the Kaiser in World War I, the model which so infatuated Lenin it was his template for designing the catastrophic Soviet economic experiment. And if for no other reason, although Putin has a gigantic nuclear arsenal, Russian conventional military forces do not remotely resemble Hitler’s wehrmacht. But Hillary Clinton was correct when her speechwriters said Putin’s grab of Crimea resembled the Nazi dictator’s repeated claims on his neighbors’ territory through provocations. This time Putin, too, masked pure and simple aggression as ethnic conflict replete with hired thugs and Russian soldiers short of their insignia. As Polish columnist Konstanty Gebert, commented, apparently only half-seriously, “… the analogies are staggering to the point that I’m asking myself whether Mr. Putin’s speechwriter didn’t intentionally model elements of the speech [formally announcing Crimea’s annexation] on the more famous predecessor.”

Furthermore, The Economist’s Andrew Lucas is absolutely right in condemning on moral terms the Western apologists for Putin, wondering whether we would have treated a former Gestapo figure with such “understanding” had postwar Germany retreated from democracy. An interviewer on government-subsidized National Public Radio [where else?] suggests a fundamental difference Communism and the Nazis: the Kremlin did not pursue a policy of annihilating one people, the Jews. [The Crimean Tatars, 200,000 killed with forced evacuation during World War II, and more murdered when they tried to return after the Soviet implosion, might take exception to even that supposed distinction.] But that is an all too familiar rationalization of the Western left for Moscow’s actions, a Russia where there has been only the slightest fundamental grappling with the horrors of Stalinism and the tens of millions killed by the Leninist regime. It is a very fine distinction, indeed.

Again, unlike the Soviet Union which attempted autarky except in crises when it needed a capitalist transfusion [see Sanders’ Living Off the West: Gorbachev’s Secret Agenda and Why It Will Fail, Madison Books, 1990], Boris Yeltsin and then Putin’s Russia sought integration into world markets. That is Putin’s strength and his weakness. As by far the world’s greatest exporter of natural gas and the second largest oil producer [only recently has U.S. production risen to make it No. 1], the $160 billion Moscow earned from fossil fuel exports in 2012 is the critical element in its weak economy. The shale revolution initiated by American technology, again, offers abatement in the long run of European reliance on Russian gas. If only Pres. Barack Obama would drop his war on fossil fuels and speed up U.S. pipelines, LNG installations for fleets and exports! Note the call of several Central European countries publicly since the Ukraine crisis began for just such action. Instead, as so often happens with democracies, instead of dramatic, decisive action, Obama has chosen to scale up his economic weapons, thereby giving Putin that more time to accommodate.

True, there will be a price to pay for economic warfare to rock Putin’s boat, especially by our European allies. But there is no reason – given all that he has said publicly and his blatant action in Crimea – to believe that the old secret police thug is aiming at less than an attempted restitution of a Russian empire. Already there have been hints at exploiting other Russian ethnic minorities, which exist in all the former Soviet “republics” that freed themselves from Moscow’s rule in the 90s, as he has done on the Black Sea.

Those who obscure the issue by either justifying Putin’s actions with such bogus arguments as Washington’s purported failure to accord Moscow a sufficient world role after the Soviet implosion, or wishful thinking that Putin may not continue to bluff his way to new victories to bolster his rickety regime, are doing world stability and peace a great disservice. Of course, there are complexities and crosscurrents. But the fact is the world again is faced with an aggressor dedicated to territorial aggrandizement. And only standing up to the bullying effectively is the answer to maintain long term peace as NATO, the most successful alliance in history has proved.

German Chancellor Angela Merkel, with more contact and knowledge of Putin than other Western leaders, has said he lives in “fantasy”. That U.S. Secretary of State John Kerry and British Foreign Minister William Hague continually assure Putin — and us – that we are in a new era, absent 19th and 20th century national conflicts, suggests others too may have stumbled into a tangentially related “fantasy.”