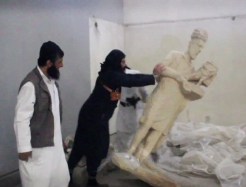 Left:  ISIS “deliberate destruction of irreplaceable objects of religious and cultural values in the museum of Mosul and burning thousands of books and rare manuscripts from the library of Mosul.“

In the past two decades, following the rise of Al-Qaeda and additional Salafist-jihadi organizations, graves have been destroyed and Moslem and non-Moslem statues have been smashed in various places around the world. Thus, for example, a huge statue of Buddha was destroyed by the Taliban in Bamiyan, Afghanistan, in 2001 (the tomb was restored only a decade later); in 2012, Muslim cultural institutions were destroyed by Ansar Dine in Timbuktu, in the West African nation of Mali; and holy graves (mainly of Sufis) were destroyed by Islamist extremists in Libya in 2012 (not far from the capital Tripoli and in Misrata).ISIS is continuing this tradition of destroying graves and smashing statues. This was clearly evident in its conquests in Iraq in the summer of 2014. In this context, ISIS destroyed the Tomb of Jonah and the Tomb of Daniel, both in the area of Mosul, and the grave of the Sufi Sheikh Ibrahim in the Nineveh province. In addition, ancient statues and cultural treasures in Iraq dating from the beginnings of human civilization were smashed. ISIS is now continuing to do so even more intensely. This phenomenon is not new. It has historical Islamic roots attributed to a statement by the Prophet Muhammad.

The Islamic State recently began an unprecedented campaign to destroy ancient historical relics in the areas under its control in northern Iraq and northeastern Syria. As part of its campaign, ISIS published a video showing its operatives entering the a museum in the city of Mosul and using hammers to smash statues from the time of the Assyrian Empire found in archaeological excavations. Sennacherib’s Palace was among the historical relics that were destroyed. ISIS operatives also burned down Mosul’s library, where there were thousands of history books and manuscripts (www.taraf.com.tr, February 25, 2015). In Syria, ISIS operatives destroyed churches and stole ancient manuscripts belonging to the Assyrian community.

Instructions for making homemade IEDs-  On March 1, 2015, an ISIS-affiliated Twitter account shared a video on YouTube entitled “The Uzbek Battalion in Al-Sham (Syria) – for learning how to manufacture explosives.” The video is a step-by-step demonstration on how to make IEDs at home, designed to injure forces and damage vehicles (ISIS-affiliated Twitter account; YouTube, March 1, 2015).

ISIS makes sophisticated use of the Internet, especially social networks, to convey messages targeted to specific audiences. From ISIS’s perspective, Western countries and Muslim communities in the West are important target audiences. Extensive media materials distributed by ISIS to this target audience are designed to deter the West from attacking ISIS; increase its strength; arouse fear and terror among the Western public opinion; spread the jihadi ideology of ISIS among Muslim communities in the West; and encourage Moslems in the West to join the ranks of ISIS and carry out terrorist attacks in their native countries. To date, ISIS’s media strategy has been highly successful. Blocking ISIS on Twitter and additional social networks may harm its media capabilities and hence ISIS’s threat and attempted intimidation of Twitter’s operators.

The threat against the operators of Twitter (http://justpaste.it/jot6, March 2, 2015)

Tape justifying the burning of the Jordanian pilot

The new website of ISIS, a terrorist organization which is investing considerable effort and resources in developing its propaganda machine