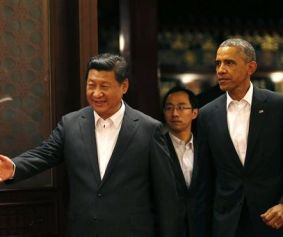 A servile media has again misrepresented the important if unproductive Asian tour of President Barack Hussein Obama, most importantly the promised engagement with China which failed to materialize.

The ballyhooed U.S.-China climate change agreement, appealing to the fashionable, signed between the U.S and China, was much less than meets the eye. It committed America—until it gets to a Congress which will have a different sense—to a rigorous cutback in industrial carbon emissions to be achieved at the price of economic growth and jobs.

It couldn’t be more bogus. Beijing, by far the world’s greatest polluter and, not only through carbon emissions but through poisoning of its arable land and most of its water, only formally signed on for something ambiguous down the road. Worse still, as Japanese and South Korean consumers have found—and those Walmart customers may one day learn too at their peril—it exports its poisons through cheaper processed foods.

Recent history is littered with the evidence of failures of the Chinese Communist adherence to international agreements it has signed. Ironically, many of them were pushed through international forums by Washington administrations, both Republican and Democrat, anxious to bring “a rising China” into the world family. For example, none of China’s promises have been fulfilled after the U.S. shoehorned it (against considerable opposition) into the World Trade Organization with all its benefits.

As previous administrations, most notably the two Bush II terms, Washington did not take on China’s manipulation of its currency and its subsidized exports which have disemboweled American manufacturing. That Chinese thrust had to be met at the same time U.S. industry was trying to cope with the digital revolution, with its enormous increases in productivity but an absence of low and medium-skilled job creation.

The sagging European economy and the slowest recovery from recession in American history bite into the Chinese economy as well, particularly its dependence on exports (and its growing debt burden which financed an overly ambitious infrastructure expansion). President Xi Jinping’s answer to this growing economic dilemma is to screw down on the regime’s growing difficulties with its exposure to the Internet’s erosion of the old Party information control while making an effort at economic reform.

Xi has encouraged talk that he is the new Mao with more than a hint that his repression of dissent would be as draconian. There is growing acknowledgment at home and abroad that the Chinese regime is headed into a crisis of the regime, perhaps an attenuated one, when the answers of the recent past will not be sufficient. That could well mean that Washington (and Tokyo and South Korea) strategists not only face an increasingly powerful Chinese military force but one being guided by an arrogant Party leadership in charge of an increasingly unstable behemoth.

Obama’s answer in Beijing to this new conundrum was hardly convincing. He signed one more agreement to open up Chinese military communication with the U.S. armed forces. It is another of a series signed over the years, for all of which Beijing initially signaled its intention to follow through on. But all have languished for continued stone-walling on any official information illuminating Chinese force structure, armaments development, or strategic intent. The U.S, along with its allies, will have to continue to piece together what the massive increases in budgets for the Chinese military actually mean, and where Chinese theft of intellectual property and imitation of American, Russian. and Japanese arms is taking its ability to wage war.

All of that is of great moment. The possibility of an aggressive Chinese military—often seemingly with mouths out of control of the Communist Party’s supposed tight rein—will remain. As long as China, unlike any other great power, refuses to divulge any of the details of its military buildup, its counterparts are playing blind man’s buff with always the possibility of untoward incidents developing into major exchanges.

Compounding this lack of official interchange is what is happening on the Chinese domestic scene. A dramatically slowing economy now has fallen far short of what foreign and Chinese convention held as the minimal 8 percent annual growth in gross domestic product necessary to maintain internal stability. Plucked from the air by foreign analysts and the Chinese themselves, it was never clear that such a figure really had all that much magic. It relied on what was believed to be the need for jobs for a rapidly growing population. But now, China, even more than the industrial societies and in part the result of its inhuman and corrupt one-child policy, is facing a rapidly ageing population as well as a shortage of the abundant cheap workers which underlay the boom.

Rapid economic development had long since taken the place as the raison d’etre of the former Marxist-Leninist-Maoist dogmas which justified an authoritarian regime based on the political monopoly of the Communist Party And increasingly with the remarkable growth of the last three decades, it was the justification for growing class and regional inequalities. That included a pampered elite with incomes and luxuries denied all but the most publicized millionaires/billionaires in the West and Japan. One signal of the stress the regime is now under is the flight of leading members of the Communist elite, following their children in foreign universities—and their money—to foreign climes, not least North America.

Secretary of State Hillary Clinton’s much publicized “pivot” to East Asia from American entanglements in the Middle East was still voiced at a meeting of the Association of South East Asia, where Obama proceeded after his Beijing visit. But to the increasingly nervous Southeast Asians—caught in the vice of their increasing commercial exchanges with the Chinese and their fear of growing Beijing imperialist designs on their territory and raw materials—Obama offered little comfort except more rhetoric. With a straitened American military, the transfer of U.S. power to the region has been slow if at all. The Japanese are rumored concerned that Obama’s former friend, Turkish President Recep Tayyip Erdogan’s refusal to permit use of the Turkish-American-NATO base at Enrcilik, has put a strain on the new carrier-based air war against ISIL. That, of course, turns out to be a renewed commitment of the U.S. in the Near East region. The Japanese have grumbled quietly that because of the ISIL campaign demands, East Asia will be four months without a U.S. carrier home-ported in Yokosuka. And the esoteric strategic arguments about aircraft carriers in a new era of warfare notwithstanding, their geopolitical psychological import is not to be disabused.

With a turbulent U.S. domestic political scene—one in which Obama has apparently decided to challenge the new Republican majorities in both Congressional houses rather than try for conciliation—China policy is probably going to be relegated to a backburner. That may give both sides a respite of benign neglect for U.S.-China relations. But it also hints that problems will not be addressed, at the risk that an explosive confrontation between Washington Beijing might prove inevitable.

* A version of this column will be posted Monday, November 17, 2014, on the website http://yeoldecrabb.com/.