The [Chinese] emperor has no clothes 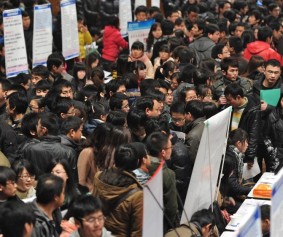 The shudder that relatively minor bad news from China sent through world markets last week was a warning that the halcyon days of Beijing’s economy are over. Indeed, reluctantly because of self-interest and wishful thinking, a universal consensus finally is emerging that the Chinese economy is in deep trouble, a crisis that could perhaps overturn the regime itself.

The cardinal indicator is that the Chinese economy is slowing down. How much, how fast, which sectors, is all open to speculation given the notorious unreliability of Beijing statistics. But certainly we long ago dipped below that 8% minimal annual gross national product growth rate which once was accepted inside and outside the Middle Kingdom as the requirement for political stability.

In a sense, it was inevitable: perhaps the world has no history of a regional economy as large as China’s growing at its phenomenally high rate over the past two decades. But, then, too, it has been obvious to all but the most optimistic that huge aberrations were being built into a wanting modernization process that would eventually haunt the leadership. That’s where we are now.

There is unusual agreement, again, among Chinese and foreign critics of what is wrong and even accord on remedies for amelioration. Communist Party Chairman, chief executive, and chief of state Xi Jinping and to a lesser degree Prime Minister Li Kegiang, some 18 months in office, are saying all the right things. Xi, unlike his predecessors, even manages to project charm to sell what will be under the best circumstances extremely difficult structural reforms. The new leadership has come down hard on corruption which is not only endemic, but has taken on growing economic aspects with everything from undermining manufacturing quality to facilitating a huge capital flight. It acknowledges that pollution, paralyzing major cities for days and increasingly jeopardizing children’s health, is an economic hazard.

But however clear a new formula would have to be found, the task is daunting. Such a strategy would have to replace the two-pronged drive put into place once the Chinese Communists abandoned Marxist-Leninist-Maoism in all but name. Mao-style autarky was trashed for an enthusiastic welcoming of foreign investment and transfer of technology to build export markets based primarily on abundant cheap labor. But at the same time, Beijing continued the Soviet tradition of enormous expansion of the infrastructure, well beyond contemporary or projected demand.

This Weltanschauung now has eroded dramatically.

The worldwide economic downturn ended an unlimited expansion of markets for Chinese exports. These manufactures had become part of a vast, new production chain in which international companies used Chinese assembly to produce products for sale to the U.S. and the rest of the industrial world at bargain prices. While these operations introduced limited manufacturing, through manipulation of currency and subsidies Beijing was in fact subsidizing foreign buyers. One look at the retail prices of products at an American retailer indicates that some dissident Chinese economists may well be right arguing that a capital-short country was exporting capital to wealthier nations.

Furthermore, Chinese razor thin margins have been jeopardized by rising costs, including growing fuel imports and a flattening out of the labor supply due to the regime’s attempts to stem population growth. For these reasons China already has lost many of the lowest end manufactures to other low-wage competitors; infants garments, for example, to Bangla Desh. There is even some movement because of technological improvements of off-shored manufacturing back to the industrial countries. For example, with America’s shale revolution reducing the price of domestic natural gas to a third of delivered prices of LNG in East Asia, petrochemicals and their plastic products are returning.

At the same time, China’s vast infrastructure expansion is falling victim to a growing credit crunch. Having sailed through the financial crisis with an unprecedented “stimulus” package of $586 billion in November 2008, Beijing created overcapacity and overinvestment. At the same time, local government’s expansion was based on sales of diminishing farmland for industrial and infrastructure development and credit from regional bankers.

The net result of all this is debt that even the government has found difficult to estimate and a fragile financial structure at every level of government. Perhaps more important, it has resulted in an increasingly onerous situation for private developers who carry a disproportionate weight in the overall growth. With stop and go credit policies, intrepid bureaucrats have created new shadow credit organizations beyond the scope of government monetary and fiscal policy.

The generally accepted recipe for solving these problems is to move the economy away from its concentration on investment and exports toward greater consumption and financial liberalization. But, in fact, recent trends have been in the opposite direction, as the government faced dismantling a system which had profited small urban elite enormously with a superficial appearance of modernization. The strongest resistance has come from huge government corporate entities and the welter of smaller SOEs [state owned enterprises] in the hands of regional and local Party apparatchiks. Their influence inside the ruling Communist Party gives them call on capital, even when as often happens, to entities either deficit or bankrupt.

What gave the markets the shivers last week was a statement from Li that a series of defaults were inevitable as the government tries to rationalize. A default by Haixin Steel, a relatively small operation but with ties to coal and iron ore companies was what gave rise to international concern. It also reflects what industry sources believe is a growing collapse with half of the country’s steel mills losing money. A week earlier China experienced its first bond default when Chaori Solar, a small privately owned solar panel maker, was unable to meet interest on Rmb1bn ($163 million) of bonds sold only two years ago.

In the past, the government has always picked up defaulting companies. If that policy is now to be abandoned, it is unclear just how big the debacle will be and whether it could lead to panic. Already world copper and iron prices fell sharply under the pressure of Chinese speculators retreating from their bets on a continued high level of metals production.

To remedy these problems, Xi’s highly publicized reforms, however much pushed by the leadership, are running into the often hidden outcome of past excesses. For example, not only does the attempt to moderate the “one child” policy appear as a lame effort to resolve an already warped sex ratio in the society – female fetus abortions having produced a vast excess of males – but a huge, corrupt bureaucracy created to enforce the strategy is blocking real changes.

Furthermore, such side issues as hundreds of thousands of “illegal” births have produced a sizeable population which cannot claim identity from the still deeply held conviction of Party leaders they must control any dissidence through strict monitoring. A similar problem exists for the hundreds of thousands of part-time workers in all the major metropolitan centers, brought in as “cheap labor”, but refused urban citizenship and a right to limited social welfare benefits. The security proponents are allied with local governments in this instance against any “reform” because of the additional costs it would heap on already overburdened local government and the dismantling of authoritarian control of every individual.

While the system does have the support of the Party apparatchiks, a highly touted new urban middle class does not exist. Best estimates are an upper 1% of households — 2.1 million out of about 530 million households — owns 40-50% of the country’s $10.5 trillion worth of real estate and financial assets. That these ultra-rich – many at the Party’s highest echelons – are moving money into foreign real estate and other investments is widely reported. Should they consider moving 30% of their assets abroad, which is a figure rumored in Chinese circles, the much celebrated Chinese monetary reserves of $3 trillion in dollars would be inconsequential in stemming the tide.

This prelude to a cataclysmic readjustment of the Chinese economy is arriving at a time when Western economists and businessmen have had to abandon a long-cherished hope that continued rapid Chinese [and Indian] development would prop up the world economy. But their disillusionment on this aspect is likely to pale into insignificance as the effects of the Chinese slowdown impacts further on commodity producers in Africa, Latin America and Australia.

Beijing leadership’s quandary is that the struggle to refashion the Chinese economy with further liberal economics comes up against the determined effort of the CCP to maintain its power monopoly which forbids just that. For example, the effort to turn the yuan into an international currency requires it become convertible. That would not only jeopardize current export subsidies but would further encourage the flight of capital, largely a function of the corruption in the Party, often at its highest levels. .

That produces an explosive environment where almost scenario is arguable.
sws-03-16-14