The Bear is Loose 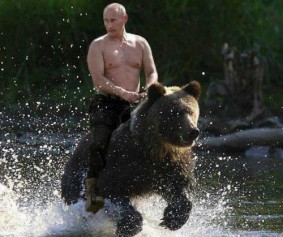 No, not the self-designated ursus in the White House, but the Kremlin’s ruler.

Having launched a program attempting to reinstate Moscow’s hegemony over the former Tsarist/Soviet Empire, Vladimir Putin now has been hoisted on his own petard.

When his naked aggression in Georgia in 2008 elicited no significant American-EU response, he followed it with his 2014 annexation of Crimea. When that produced little more than Western denunciation, he mobilized for further aggression, attempting to use the Russian-speaking minority in eastern Ukraine.

But he has now become a prisoner of his own rhetoric and aggression.

True, like the European dictators of right and left of the 1930s, he has gained wide popular support at home. But the chauvinistic reaction of the Russian public is a false flag. Shamed and humiliated by the implosion of the Soviet Union (“the greatest catastrophe of the 20th century”, Putin has said), a catastrophic declining population, a start-and-stop economy, and an enormous flight of capital, Putin has used aggressive nationalism to try to reinvigorate a failed regime with all-too-well-remembered demagoguery.

But he is now riding a tiger. Earlier he seemed to have won in Ukraine with an administration succumbing to pressure to back away from the overwhelmingly popular demand to move closer to European Union’s prosperity. (Even relative objective polling of Russian-speakers in Ukraine show their choice is to move into the EU orbit rather than to tie their destinies to a failing Russia.) Then, when a popular movement overthrew that Kyiv administration and installed a new pro-European Union executive by a democratically elected parliament (reinforced now with new elections), Putin grabbed Crimea and began to try to manipulate the Russian-speaking minority in eastern Ukraine for his program to reestablish empire.

The criminal stupidity — and how far the Russian finger was actually on the trigger would still have to be determined — of his own intelligence operatives and their following inside eastern Ukraine in bringing down an innocent passenger aircraft has jeopardized his strategy. The scandal has rocked even the most timid in the EU — perhaps even the Germans with their aggressive business interests in Russia. (Citizens of the Netherlands, so often “the swing vote” in EU decision-making, were the overwhelming majority of the victims in the downed aircraft.)

How much it was the pull of a strategy he dare not halt or the push of the reluctance of the U.S. and the EU to engage him may be irrelevant. He has now decided to go ahead full blast. However, his bluff becomes increasingly more dangerous for his hold on the Kremlin as well as for the Russians generally. His difficulties are suddenly greater because even a fragile Ukrainian regime is pressing relatively successfully on his Ukrainian puppets. So, by all documented Western accounts, his response is to pour new weaponry across the border into Ukraine, even supporting his devastated puppets with artillery fired from across the border in Russia.

It is rapidly becoming an undisguised war of Moscow against Kyiv.

That will force even the Obama Administration — under Congressional pressure — to extend more than token aid to the Ukrainians. It may even move the Europeans to bite the bullet and challenge Putin to cut off the gas sales which he needs as desperately if not more so than the EU customers.

With the Russian economy dropping into negative growth and a World Bank estimate that more than $100 billion in capital flight is projected for this year — it has already exceeded by a third last year’s total — the domestic economic scene is rapidly deteriorating. No one expects Putin’s coterie of fellow KGB siloviki to desert him. But he can only confiscate and throw into prison so many corrupt oligarchs with their bank accounts in The City of London. They have been critical support for his regime. And economic distress will eventually erode the fashionable current ultra-nationalism of the Moscow bureaucratic elite that runs the country.

So Putin ploughs ahead into trying not to dismember the post-Soviet Ukrainian state but to dominate it, if perhaps with the cooperation of a Washington Administration still trying to accommodate him. That’s based on the incredible parity with which Secretary of State John Kerry publicly continues to conceptualize relations with friend and foe (whether Ukraine and Russia or Israel and Hamas).

But with an increasingly lame duck President Barack Obama, probably facing a two-house Republican Congress after November, that, too, is eroding.

It is significant that Hillary Clinton, in full candidate mode, after endorsing the “reset” of U.S.-Russian relations as Obama’s secretary of state, now is publicizing her supposed differences with Obama when she was in office. She now takes a hawkish line, for example asking for U.S. arming of the Ukrainians. That, of course, is a part of her absolutely essential political gambit to distance herself from the increasingly unpopular Obama, if she is, indeed, to make a successful run for the presidency. Her Sunday interview with Fareed Zakaria, who laid down a patter about the culpability of the Europeans — rather than the Obama presidency and Clinton’s failure of leadership while at the State Department — as the source of the deteriorating world scene, is the foreign policy campaign line she will try to pursue. It could be no other, given a poll that says 56 percent of the American people think Obama (and Clinton will get tagged in a campaign as his former Secretary of State) is not to be trusted on foreign policy.

Meanwhile, the Obama-Kerry team continues to pursue its “lead from behind” catastrophic policies, pretending that there is no dire priority in the threat to U.S. national interest in the Russian aggression in the Ukraine (or for that matter, with international growing Islamic terrorism). That misapprehension of the current state of world affairs was illustrated with the incredible reporting of the Obama Administration’s current internal deliberations by The New York Times, the alter ego of the Administration. NYT reports: “’The debate is over how much to help Ukraine without provoking Russia’”, said a senior official participating in the American discussions.”