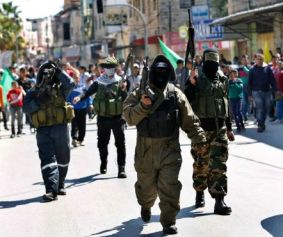 Terrorists are increasingly cooperating with criminal gangs, while Lebanon could go the way of Libya.

Two developments in the strategies and tactics of terrorism merit careful analysis:

In the Middle East this combination takes various forms. Both Hezbollah and Hamas were to some extent self-financed, through the profits from smuggling. It is estimated that Hezbollah acquires about 40% of its yearly budget of some $500 million from the proceeds of smuggling. The same was true of Hamas, until the Egyptians closed the smuggling tunnels between Gaza and Sinai, which plunged Hamas into a financial crisis which continues to worsen. The Islamic State (IS) makes money from looting banks in the areas it controls and trying to sell oil from the fields it occupies. Most of these activities require cooperation with criminal distribution and sales networks.

More recently, this terrorist-criminal combination has moved into the field of technical and tactical assistance. As a result of the recent conflict between Israel and Hamas, it was discovered that the Mexican drug gangs had supplied technical assistance to Hamas in the design and construction of the attack tunnels that the IDF discovered and destroyed. Now it has been reported that IS operatives have established a base in Ciudad Juarez, across the Rio Grande from El Paso, Texas, and are using the network of drug smuggling tunnels to move people and equipment into the United States. Homeland Security, Justice and Defense agencies have been put on high alert, especially as the anniversary of 9/11 approaches.

In the international relations of the twenty-first century, the increasing importance of non-state actors, including corporations, banks, NGOs, terrorist and separatist organizations and criminal gangs has been frequently noted. In the Middle East, terrorist and separatist groups have challenged formal armies, sometimes with great success. Libya no longer has an army in any meaningful sense. The Syrian army has been battling for its survival since 2011, the Iraqi army suffered a humiliating defeat at the hands of IS. Now the al-Qaida affiliated al-Nusra Front, pushed out of eastern Syria by IS, has openly challenged the Lebanese army and has warned Lebanese Sunni Muslims not to support the army on pain of death.

This, coupled with the pledge on the part of IS to destroy Hezbollah, which has been busy supporting the Assad regime in Syria, may lead to a situation of utter chaos in Lebanon. Much of the army is made up of Christian Lebanese, still about 40% of the population. A confrontation is possible, making the persecution of the Christians of northern Iraq by IS look like child’s play in comparison. And the Lebanese Christians have no Kurdish region where they can find sanctuary. The Saudis have tried to strengthen the Lebanese army with financial help, but it is not clear that Lebanon may not go the way of Libya, which is no longer a country, but a mosaic of local warlord-dominated regions.

There is great danger for Israel in both these developments. A Lebanon in anarchy and fragmented into factional divisions will threaten northern Israel with intended or unintended incursions and attacks. Self-financed terrorist groups are more dangerous than those that depend on outside support, and must be thwarted in unconventional ways. The financial plight of Hamas is instructive in this regard and should be seriously analyzed and the lessons applied elsewhere when appropriate.

Norman A. Bailey, Ph.D., A member of ACD Board of Advisors, is Adjunct Professor of Economic Statecraft at The Institute of World Politics, Washington, DC, and teaches at the Center for National Security Studies and Geostrategy, University of Haifa.