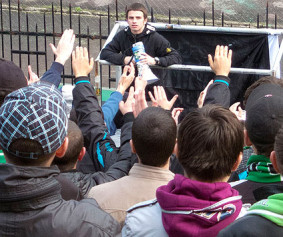 On May 24, my commentary, “Svoboda Fuels Ukraine’s Growing Anti-Semitism,” (originally published in the Algemeiner),

Raising concerns about growing anti-Semitic political forces in Ukraine. I have noted the overtly anti-Semitic, anti-Russian and anti-Polish rhetoric of Svoboda (“Freedom”) party. The rich history of Nazi-like symbolism and glorification of Ukrainian collaborators with the Third Reich did not stop the supposedly more responsible elements of Ukraine’s political opposition, the Batkivshchina (“Fatherland”) and UDAR parties from joining forces with Svoboda.

My article, which unbeknown to me, was translated and published in Russian, generated interesting comments both on the Algemeiner page and elsewhere. Some supported while others attacked me.

A supportive message, posted on the Algemeiner site from “Aleks,” included a piece of news:  a Svoboda member of parliament, Mikhail Golovko, met in Germany with representatives of the (neo-Nazi) National Democratic Party (NDP) of Germany.   In Germany, the NDP is shunned by other parties, has no seats in the Bundestag, and even has to hold their party conferences in a tent because conference halls will not rent to them.  In Ukraine, by contrast, Svoboda’s political rise and entry into the parliament has been abetted by Opposition politicians and parties hailed by western governments as the standard-bears of democratic values.

Another supportive letter from Maria Zubareva, president of a group called All-Ukrainian Association “Journalists Solidarity.” She attributes the 40% of anti-Semitic attacks in Ukraine to the virulent campaign that landed Svoboda with almost 10% of the votes at last year’s parliamentary election. Svoboda legitimized racial and national intolerance, which led to increasing violence on this ground, she argued and concluded, “Svoboda [is] a real threat to the Jewish community of Ukraine.

Matthew Lina of the conservative-leaning Center for the Study of the Former Soviet Socialist Republics aptly called Svoboda “fascists (‘racist xenophobic national socialists’…) and even suggests I was too easy on Svoboda’s partners in the Opposition: “Ehrenfeld is either too kind to Tymoshenko or naive on this count — there is no chance at all that Tymoshenko had not blessed the union with Svoboda….  It is time for the world to call them to account.”

More illuminating and troubling were comments by supporters of Svoboda and its message.

“JameSmace” claims, “Svoboda is nothing more than the leading anti Russian Imperialist party in Ukraine and they will make no special accomodations [sic] if the thug oligarch is Jewish instead of Christian – after all Kagonovich [sic] killed 10 million Ukrainians.”   The reference is to what is among the greatest of crimes of the communist regime, the starvation of millions of peasants (“kulaks”) to enforce collectivization of agriculture. Alas, Lazar Moiseyevich Kaganovich was not the first or the last Jewish Bolshevik who successfully implemented the policies of Stalin and his successors in the USSR.

For the record, “JameSmace,” Stalin was a Georgian.

Then there is Michael Brytan who writes: “The problem which Rachel does not seem to understand OR does not want to is there are Jews are a divergent peoples.” (Emphasis added) Really!

Another supporter of Ukrainian anti-Semitic Svoboda, identified as “J” explained the “facts.”

“If you look at the mafia rulers in Ukraine – you’ll see that they are Russians and Jews – that’s why Tiahnybok said “Moscow-Jewish mafia”.…About incident with Mila Kunis – she said that she is Jew but not Ukrainian (she is Ukrainian-born but her parents was both Jews). And word Zhyd in Ukrainian language means the same as Jew (and this is not abuse word). Russian language uses Zhid as abuse name of Jews (and Hebrew for other case) – that’s why Russian-spoken Jews thought that that was abuse words.”

Even more telling than the individual perspectives behind these bigoted comments is what they portend about future dangers in Ukraine.   Ukraine is far from the only country that needs to struggle with atrocious episodes from its past and face disturbing influences on its future.

America has its own struggles with racism and anti-Semitism.

On June 15, the Associated Press exposed Minnesota resident and Nazi war criminal Michael Korkac, who as in 1949, was allowed to immigrate to the U.S. Korkac, who was involved in suppressing the 1944 Warsaw Uprising, is a former officer and founding member of the SS-led Ukrainian Self Defense Legion and later as an officer in the infamous SS Galician Division, which, as mentioned in my earlier article, was glorified by Svoboda. “The Galician Division and a Ukrainian nationalist organization he served in were both on a secret American government blacklist of organizations whose members were forbidden from entering the United States at the time.”

Ukraine’s strongest western well-wishers have urged the “respectable” Opposition to shun Svoboda.    “The European Parliament [EP] has said it does not understand why opposition parliamentary factions Batkivschyna and UDAR cooperate with the Svoboda all-Ukrainian union, which the EP accuses of having anti-Semitic views.   ‘I can’t imagine that people like Klitschko, who position themselves as Europeans, and Yatseniuk, would willingly shake the hand of a person who in public states that Jews are the main threat to European civilization,’” said Marek Siwiec, a Polish EP member.

But shake hands with Svoboda they do.   In fact, they clasp hands in unity for the simple fact that they believe that working together in a united Opposition that includes Svoboda is the only way they can beat Yanukovych in the next presidential election in 2015.   Whether that will work as a political calculation remains to be seen.

In the meantime, it is imperative that Ukrainian authorities stand up to Svoboda’s rising power.  While Polish and German prosecutors announced they were looking into extradition cooperation with the U.S., Ukraine has thus far remained quiet. Unless Kiev decides to prosecute Korkac and ask for his deportation, he’s likely to live out the rest of long life (he’s 94 years old) in the U.S.