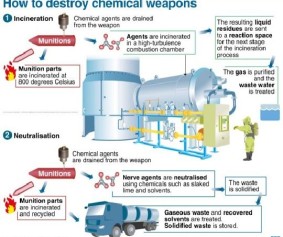 The ballyhooed US-Russian accord on chemical weapons in Syria is coming a cropper.

* The deadline, November 15, was not met since there is no country willing to accept and destroy the toxic stockpile; even Albania rejected Washington’s request to do so with international experts’ supervision.

* The cost of removing and destroying more than 1,000 tons of Syria’s declared chemical weapons is estimated at more than $1 billion. Thus far, the Organization for the Prohibition of Chemical Weapons (OPCW), raised $13.5 million merely to inspect the sights.

Through its Nonproliferation and Disarmament Fund (NDF), the U.S. “is in the process of providing nearly $6 million in in-kind and direct financial assistance,” of which is included a “$2 million contribution to the OPCW Trust Fund, along with approximately $300,000 in equipment to the OPCW, such as protective gear and medication to counteract CW exposure,” and 10 armored vehicles.” And Russia? It “may donate $2 million… and is ready to offer expert help.”
Where will the rest of money needed to carry out the Russian initiated plan – which Obama happily agreed to – come from? That minuscule detail apparently escaped the attention of the diplomats that crafted the Russian-U.S. accord. However, the delays increase the likelihood that Assad’s chemical weapons will fall into the hands of al Nusra.While the chemicals remain in place, foreign Sunnis by thethousands, from Europe, North America, Saudi Arabia, Iraq and other countries have been joining the forces of al Qaeda/al Nusra. The Saudis are footing the bills for Sunni recruitment to fight in Syria, as well as to buy weapons and other supplies. They are not held back by lack of funding. Worried, House Intelligence Committee chairman Mike Rogers, said: “All the folks there from all over the world, including the United States, will be coming home if they do not meet their end on the battlefield.”On November 5, al-Nusra and other al-Qaeda-linked groups managed to take over the Army’s arsenal in Mahin, and held on to it for 10 days. The Meir Amit Intelligence and Terrorism Information Center published an alarming report about some of horde of light and heavy weapons they took. However, it’s unknown how much of the formidable stockpile was moved out of Mahin by al-Nusra, which already announced it will  distribute the weapons to jihadists everywhere.
The Al-Nusra Front Played a Major Role in the Rebel Takeover of a Large Syrian Army Arsenal Southeast of Homs

The weapons may contribute to the organization’s military capabilities and be transferred to regional Al-Qaeda-affiliated terrorist organizations.

1. On November 5, 2013, organizations of Syrian rebels, including the Free Syrian Army and the Al-Nusra Front took control of a Syrian army precinct in the village of Mahin, southeast of the city of Homs. They took over an arsenal considered one of the largest in Syria. The takeover occurred during a large rebel military operation called the “The doors of Allah which are not slammed shut.” The Al-Nusra Front, which glorified its role, issued photographs of scores if not hundreds of crates of weapons seized in the operation (See below).

3. The takeover of the Syrian army arsenal provided the Al-Nusra Front with an important source of weapons. One of the organization’s senior commanders previously said that they did not lack weapons because in one of the raids on a Syrian army base they acquired more weapons than they could have gotten from sources outside Syria.(2) During 2012 and 2013 the Al-Nusra Front has displayed a variety of weapons, including anti-tank missiles that fell into their hands during fighting (See Appendix). However, compared to the past, the weapons seized in Mahin were exceptional, both in quantity and apparently in quality.

5. In our assessment, the Al-Nusra Front and other jihadist organizations will try to take over other Syrian arsenals, including those with advanced weapons which will be used against the Syrian regime. Moreover, some of the seized weapons may be transferred to global jihad-affiliated terrorist organizations in other arenas, especially weapons found attractive, such as rockets and anti-tank missiles (similar to the Libyan model after the fall of the Gadhafi regime, when Libya became a source of weapons for global jihad organizations throughout the entire region.). Possible arenas include Lebanon, the Sinai Peninsula and the Gaza Strip, where Al-Qaeda- and global jihad-affiliated terrorist networks operate.

6. According to the (slanted) version of the arsenal takeover issued by the Al-Nusra Front, it began on October 21, 2013. Two suicide bombers drove vehicles loaded with explosives (a modus operandi characteristic of the Al-Nusra Front). The vehicles were driven to Syrian army bases in the town of Sadad, just to the northwest of Mahin They blew themselves up, killing an estimated one hundred Syrian soldiers. A battle followed, ending with the Al-Nusra Front takeover of the bases. Reinforced by other Islamist organizations, the Al-Nusra Front attacked the arsenal in Mahin.

7. The last stage of the fighting at Mahin lasted from November 2 to 5, 2013, ending when Al-Nusra Front operatives, with assistance from the other organizations, took control of the arsenal. Several Syrian officers were killed during the fighting. The statement issued by the Al-Nusra Front ended with its hope that the weapons and ammunition would “fuel the break of the siege on Homs and the eastern environs [of Damascus]” (Jalnosra.com website)

8. The Free Syrian Army and other rebel organizations also participated in the takeover of the Mahin arsenal. Al-Marsad Al-Souri, a Syrian human rights organization that monitors the events in the country, reported that the Al-Nusra Front was assisted by other organizations in the takeover, among them the Islamic State in Iraq and Greater Syria (the Syrian branch of Al-Qaeda in Iraq) and the Al-Khadraa’ Brigade, which belongs to a jihadist organization called the Harakat Ahrar al-Sham (the Islamic Movement of the Free Men of the Levant) (Aawsat.com website).

(1) Note: On November 15, 2013, (after this bulletin was issued) Syrian media affiliated with the regime reported that the Syrian army had succeeded in retaking the arsenal. It can be assumed that during the period between the time the rebels took over the arsenal and the time it was retaken by the Syrian army, and assuming that the report of the retaking was accurate, the Al-Nusra Front and its allies managed to remove at least some of the arms and transfer them to other locations.

(2)  For further information see the September 17, 2013, bulletin “The Al-Nusra Front (Jabhat al-Nusra) is an Al-Qaeda Salafist-jihadi network, prominent in the rebel organizations in Syria.”