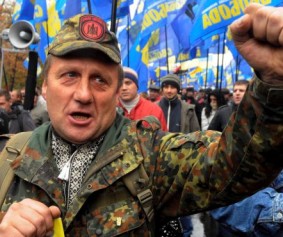 The rise of anti-Semitism in Ukraine is barely noticed in State Department’s recent International Religious Freedom Report for 2012. This is especially alarming, because even in the best of times, anti-Semitism is as prevalent in Ukraine as coal in Newcastle.

The collapse of the Soviet Union gave rise to nationalist far-right organizations as well radical Muslim groups with anti-Semitism as their common denominator. Europe’s current financial woes have also led to the rise of new neo-fascist groups such as Hungary’s Jobbik party, known for its vileanti-Semitic propaganda, and the far right extremist Greece’s Golden Dawn, with its swastika-like flag and symbols, and aspiration “to become…like Hezbollah in Lebanon.”

In Ukraine, the noisiest anti-Semitic group is the Svoboda (“Freedom”) party. Established in 1991 as the “Social-National Party of Ukraine” under the SS-era symbol of the Wolfsangel. In 2004, with new leader Oleh Tyahnybok, the party renamed itself and adopted innocuous symbols.

That, however, didn’t change the Nazi characteristic of the party. Tyahnybok himself has stated on several occasions that the “Moscow-Jewish mafia” is running Ukraine.  Other prominent party members have often used the derogatory, anti Jewish slur “zhid”, including against Ukrainian-bornAmerican actress Mila Kunis, suggesting she was not a “real” Ukrainian because of her Jewish heritage.

Svoboda supporters include among their heroes leaders of pro-Nazi World War II organizations known for their atrocities against Jews and Poles, such as the Organization of Ukrainian Nationalists (OUN), the Ukrainian Insurgent Army (UPA), and the 14th Waffen-SS Galicia Division. (To Svoboda’s vocal displeasure, Poland’s parliament recently introduced a resolution condemning the OUN and the UPA for wartime massacres of Polish civilians.)

Concerns about Svoboda aren’t confined to words and historical associations, however.  As reported by the Jewish Telegraph Agency (JTA) in April, Svoboda thugs took part in an opposition demonstration against the government of President Viktor Yanukovych, and provoked a small riot in Cherkassy, a city some 125 miles southeast of Kyiv. Outfitted with T-shirts emblazoned with the words “Beat the zhids!,” the Svoboda goons’ provocation has, according to JTA, “raised anxieties among Ukrainian Jews fearful of rising xenophobia and racially motivated violence.”  Joel Rubinfeld, co-chair of the European Jewish Parliament, is quoted saying: “Svobodalifted the lid from the sewer of anti-Semitism in Ukraine and it’s spilling out.”

All of this would be enough cause for concern. But Svoboda is not alone. Ukraine’s “respectable” opposition parties, Batkivshchina (“Fatherland”) and UDAR are not less anti-Semitic.  Batkivshchina is nominally headed by former prime-minister Yulia Tymoshenko, currently imprisoned on corruption charges, and effectively run by former parliamentary chairman Arseniy Yatsenyuk. UDAR is headed by celebrated boxer Vitaly Klitschko.   Far from shunning Svoboda–as Europe’s mainstream Hungarian and Greek parties respectively have ostracized Jobbik and Golden Dawn–Batkivshchina  and UDAR have embraced it and its anti-Semitism in a united opposition to the government of President Viktor Yanukovych, who isn’t Jewish.

Tyahnybok and his party have already benefitted from cooperation with the “mainstream” Batkivshchina and UDAR forces, which claim a “pro-western orientation” and accuse Yanukovych and his ruling Party of Regions (PoR) of being pro-Russian.  With a strong regional base in the western part of Ukraine, Svoboda emerged as a major element in the parliament following the October 2012 election, pulling in over 10 percent of the vote nationwide. Svoboda also controls local governments in parts of its home region and boosted–with the support of other opposition parties–pension payments for local veterans of the SS Galicia Division.  Hoping to enhance their future prospects, recently Yatsenyuk and Klitschko appeared together with Tyahnybok to cement a joint opposition electoral program against the current government.

Yanukovych’s and the PoR have responded to Svoboda’s rise, recently rallying its supporters under the theme “Into Europe without fascism!” and against “political extremists to revive an ideology of national enmity, and racial and religious intolerance.”

PoR draws its support primarily from the east and south of the country, which includes Odessa, the historic center of Jewish cultural life in Ukraine. “We are against fascism,” a PoR supporter told the U.S. government-funded Radio Free Europe/Radio Liberty’s Ukrainian language service: “What isbeing done in western Ukraine is wrong. I have never seen a demonstration in favor of Stalin, but the fact that fascism is trying to rise in Ukraine is very wrong.  The deputies from western Ukraine in the parliament are trying to instigate a nationalist mood.”

Critics of the government have dismissed PoR’s anti-fascist initiative as a political stunt to distract from the opposition’s rallies demanding Tymoshenko’s release and accusing Yanukovych of sabotaging Ukraine’s pro-European Union orientation.  Yet, Yanukovych has resisted pressure from Moscow to join a Russian-led Customs Union in favor of economic ties with the EU.  Moreover, his government is pressing ahead with shale gas fracking to reduce Ukraine’s dependence on Russian energy, while the “pro-western” opposition is against fracking on environmental grounds–a stance that mostly benefits Gazprom, the gigantic Russian gas supplier that holds a stranglehold on Ukraine and much of Europe.

It is troubling that Ukraine’s respectable opposition parties are playing into Russia’s hand while adopting the Nazi-like Svoboda as a legitimate political force. Advancing the credibility of an extremist group that dredges up the worst associations with Europe’s past does not bode well for Ukraine’s future. This should have been highlighted in the State Deportment’s report.

*Rachel Ehrenfeld is the director of the New York-basedAmerican Center for Democracy.  This article also appears on Allgemeiner: http://www.algemeiner.com/2013/05/24/svoboda-fuels-ukraines-growing-anti-semitism/