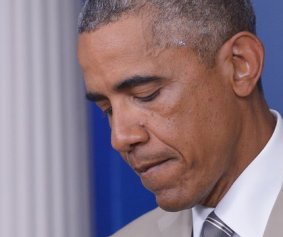 In a (rather large) nutshell, here are the tactics which when pulled together make up a grand strategy:

Make an “America is back!” speech from the Oval Office in the White House modeled on Harry Truman’s “Doctrine” speech of 1947. Its principal theme would be recognition that the U.S. and its allies are launched in an extended war — and still far from being won — against the Islamic jihadists.

Immediately ask Congress for emergency lifting of all Sequestration applying to the Department of Defense, the CIA and other security agencies for five years. Halt and reverse with continuing extension and recruitment the personnel cutbacks now decimating the American armed forces.

Reverse energy policies to provide the U.S. economy and our allies with a noninflationay stimulus of cheaper fuel, simultaneously directly providing hundreds of thousands of new jobs, by:

Administratively, opening up all federal lands (including offshore Virginia, etc.) to fracking,

Administratively, waiving all EPA regs on fracking for five years.

Ask Congress to lift all oil and gas export restrictions, including a waiver on EPA fossil fuel export regs for five years. (These exports would begin to supply allies in Europe and Asia and simultaneously help mend the balance of payments hemorrhage against the dollar.)

Immediately okay the XL Keystone Pipeline and other Canadian applications for pipelines into the U.S. directed at Houston refineries and their export facilities.

Cooperate with Detroit and foreign-owned auto companies to organize and subsidize a national network of filling stations for an expanded production and use of LNG-fueled vehicles.

To reinforce federalism, begin the rescission of the 17th amendment, restoring the original intent of the Founders by returning the power on how to elect senators to the states, freeing the states to determine their own method including indirect election by the various legislatures. (Most of the turn-of-the-20th-century arguments for direct election are now better ones for indirect election, e.g., “it’s a millionaire’s club”.)

Resurrect the independent U.S. Information Service (Agency) with a cabinet post and assistant secretaries from State, Defense, and CIA. The new department would incorporate the Board of International Broadcasting, expanding Radio Liberty (with renewed local language broadcasts to Central Asia) in order to tell “the American story” to the world.

Bomb the ISIL in Syria and Iraq “back to the stone age” with a massive WWII-type aerial bombardment. In riposte, sanction all banks and financial institutions — including third parties, and, of course, including all Russian and the Chinese institutions — doing business with the Assad regime.

“Pressure” Turkey to accept a NATO mission on its southeast flank to work directly with the secular and “moderate” Islamic anti-Assad forces from a Turkish sanctuary. Organize with our NATO partners a joint “request” that Ankara release immediately all imprisoned Turkish journalists as the first step in reinaugurating the movement toward a civil society. Let President Recep Tayyip Erdogan know that if he does not acquiesce to these quiet pressures and move back from his drift into Islamism, Washington will demand Turkey’s expulsion from NATO.

Reinvoke strict sanctions on Tehran until the mullahs accept a NATO — not the UN IAEA, which has been so notoriously inept — inspection of its nuclear activities. Slam the possibility of military intervention “back on the table” and be prepared for surgical strikes to slow if not deter the Mullahs’ acquisition of WMD.

Administratively, add the Moslem Brotherhood to the State Department’s terrorist list, and direct the FBI to insure that all domestic Islamic organizations (including mosques) with formal and informal ties to the Brotherhood be put on a terrorist alert list.

Lift all restrictions on arms to Egypt now being temporarily enforced and invite General Sisi to visit the U.S. before mid-summer 2015.

Immediately, and with considerable public fanfare, accept Sheik Tamim bin Hamad Al Thani’s request for stationing additional American forces (he has called for 10,000) on the world largest air base at Al Udeid (Abu Nakhlah Airport), the U.S. Army base at Sayliyah, and the U.S. base at Doha. Then, “encourage” the Gulf States (UAE, Dubai, Saudi Arabia), in concert with the United Arab Republic (Egypt), to issue an ultimatum to the Sheik to end all payments and subsidies to the Moslem Brotherhood, Hamas, al Nusra and ISIL and to both Arabic and English al Jazeera networks — “or else”. Compensate by helping the EU, and especially Germany, to negotiate greater LNG purchases from Qatar, if necessary using additional European storage facilities, to negate the Russian fossil fuels blackmail.

Reoccupy with significant ground forces and maximum publicity the old Wheelus U.S. Air Force base at Mitiga International Airport in eastern Libya. “Encourage” General Khalifa Belqasim Haftar to negotiate the merger of Libya with the United Arab Republic (Egypt) with the help of ENI (Ente Nazionale Idrocarburi) whereby the huge oil revenues could be stolen and wasted more beneficially.

“Persuade” the UN to amalgamate the UNWRA (special Palestinian UN organization with its enormous budget) with the UN Refugee Organization with the appointment of an American administrator by withholding the major part of both their fundings from the American taxpayer (as was done earlier to reform UNESCO and ILO). Insist on a purging UNWRA staff, ejecting all those who have worked for or been active in Hamas, a terrorist organization so designated by the US and its allies.

Put the ruffles and flourishes back into the Anglo-American alliance with its attendant links to Canada, Australia and New Zealand as the cornerstone of NATO and America’s world alliance strategies.

Deliver ASAPiest heavy weapons and technical assistance to Ukraine in its fight against the invasion by Russian President Vladimir Putin’s forces and block Moscow’s intervention in rewriting the structure of the Kyiv regime.

Establish a NATO base in Estonia.

Move into lock-step with the French in tamping down West and Central African violence (see below).

See that the NATO Rapid Deployment Force becomes a reality ASAPiest with the training on a level with U.S. and British Special Forces.

Prepare for the eventual collapse of the Euro.

Quietly assign a senior U.S. diplomat to a special U.S.-Japan-Korea commission to sit sine die to help sort out issues between Tokyo and Seoul with special personal representatives of Prime Minister Shinzo Abe and President Park Geun-hye. (Their grandfather and father, respectively, established postwar relations between the two countries.) This would aim to smooth over the most important obstacle in an American-led defensive alliance in Asia against North Korean and Communist Chinese threats.

Reinvoke the strict sanctions earlier used to induce the North Koreans to come to heel, including third-party sanctions against any financial institutions who deal with them, openly or clandestinely. They would be lifted when an international inspection team consisting of Americans, Japanese, and the NATO allies certify its weapons of mass destruction programs have been ended.

Nudge ASEAN to resurrect the intent of Secretary of State John Foster Dulles’s 1950’s Southeast Asia Treaty Organization with the headquarters again in Thailand, and hold out admission possibility to Vietnam (if it makes major “reforms”, that is de-Communize) in its feud with Communist China.

Push Taiwan rearmament and “invite” the Republican Party to cuddle up to the Democratic Progressive Party to pressure the Kuomintang back into a stronger line against amalgamation with the Mainland to maintain the only democratic society in Chinese history.

Initiate “tough love” with Mexico, e.g., introduce legislation to subsidize American investment in Mexican oil and gas in exchange for joint paramilitary border operations to halt illegal flow of immigrants to the U.S. with reinforced joint patrols on both sides of the border and a joint U.S.-Mexican undercover immigration control force on the Mexican-Guatemala border. Reach agreement on new “modalities” for protecting American citizens traveling, visiting and doing business in Mexico, matching those afforded Mexican citizens in the U.S.

Swap new legal provisions for bond concessions to the Argentines for their cooperation in U.S. Latin American projects, especially cleaning up “ice” trafficking through Rosario and Iranian penetration of neighboring Paraguay, and a quit-claim to the Falkland Islands.

Introduce legislation to reinstitute the macro aspects of the Cuban embargo at the same time removing all restrictions on movement to and from Cuba by American and Cuban citizens.

Move U.S. Africom to a new joint U.S.-French-Portuguese-NATO base to be built rapidly with port and air facilities on Sao Tome e Principe in the Gulf of Guinea while pursuing a campaign of destruction with African and Eruopean allies against Boko Haram.

If this seems a formidable list, it is indeed. If it seems an impossible list, remember that a population less than half the present one in the American war mobilization between 1939 and 1944 doubled real wages in the U.S., produced 229,600 aircraft, added 5,000 ships to the existing merchant fleet, even though two-thirds of the economy was devoted directly to military equipment — and simultaneously won a war against two formidable enemies. It took leadership and political resolve. But just as the attack on Pearl Harbor alerted a recalcitrant nation, however far current leadership has drifted away the country should be reminded that 9/11 was proof that “the splendid isolation” of the U.S. from the rest of the world’s troubles during the 19th century is long since past history.

But no amount of posturing over strategy and tactics will suffice if the leadership is irresolute and tries to wish away the dangers of that world jungle that has now physically encroached.

* A version of this column will be published at yeoldecrabb.com on Monday, September 8, 2014.