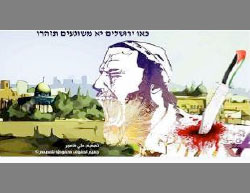 Judging by the standard used by the authors of State Department’s reporting on Israel in the newly released Country Reports on Terrorism for 2016, the Palestinian terrorist who violently stabbed to death three Israelis and seriously wounded another as they celebrated the Shabbat and the birth of a new grandson should not be held responsible.

Why?  Because as the State Department puts it, it is the “frustration” with and “perception” of Israel’s policies that drives Palestinian terrorists to murder Israelis.

The State Department’s report claims that the “[c]ontinued drivers of [Palestinian] violence” are Israel’s policies.  Accordingly, Palestinian terrorists like this one commit violence, not because schools, television, newspapers, mosques, and social media are constantly inciting to violence against Israel and its Jewish citizens.  Moreover, the report praises Mahmoud Abbas’s “commitment to fight terrorism” and call for “culture of peace and tolerance and the renunciation of violence and extremism.”  It also notes that the “PA’s Palestinian Broadcasting Company’s code of conduct does not allow programming that encourages ‘violence against any person or institution on the basis of race, religion, political beliefs, or sex.'”

Apparently, in a thin effort to disguise State’s siding with the Palestinians, the report admits that “[i]n practice, however, some instances of incitement took place via official media. There were also some instances of inflammatory rhetoric and the posting of political cartoons glorifying violence on official Fatah Facebook pages.”  “[S]ome instances”?  Try every day, everywhere, all the time.

The Palestinian terrorists, according to the State Department, are driven to such extreme violence because of “lack of hope in achieving Palestinian statehood, Israeli settlement construction in the West Bank … [and] the perception that the Israeli government was changing the status quo on the Haram Al Sharif/Temple Mount.”  Moreover, the report also blames the IDF for its effort to curb such violence “with tactics that the Palestinians considered overly aggressive.”

The authors of the report don’t consider Palestinians murdering Israelis at their homes, streets, bus stations, stores, and coffee houses, “overly aggressive.”  If this outrageous attitude continues, how long before the State Department describes the actions of Palestinians breaking into Israeli homes and murdering the elderly, women, and children at their dinner table as “defensive actions”?

In addition to murdering a 70-year-old grandfather who was celebrating the birth of a new grandson with family, the terrorist severely wounded his 68-year-old wife, who is fighting for her life at the time of this writing.  The rest of the family, including grandchildren, escaped a brutal death because their mother succeeded in hiding them, and a neighbor shot and neutralized the terrorist.

The report’s justification of Palestinian terrorism and violence while blaming Israel reads like another Al Jazeera propaganda piece.

This is not surprising, considering the State Department’s intervention on behalf of Qatar, as noted by Norman Bailey’s Globe article, “US support lets Qatar off the hook.”  Because Qatar is the host of the biggest U.S. base in the Middle East, Secretary of State Rex Tillerson forced the Saudis, the UAE, Bahrain, and Egypt to cancel their thirteen “non-negotiable” demands that Qatar stop its sponsorship of the Muslim Brotherhood and radical Islamic incitement and terrorism, and its support of the Iranian and Turkish regimes.  Qatar, and its mouthpiece, Al Jazeera, also sponsor and promote Palestinian terrorism.

The U.S. intervention on behalf of Qatar, and the State Department praise of P.A. president Abbas and the Palestinian leadership for their imaginary intolerance of “[e]xplicit calls for violence against Israelis, direct exhortations against Jews,” at the time President Trump repeatedly, publicly, at home and abroad, condemns Islamic terrorism, Iran, and P.A. sponsorship of terrorism, highlights the inconsistency of U.S. foreign policy.  Moreover, this puts another obstacle in the way of President Trump’s declared ambition to achieve “peace between Israel and the Palestinians.”

Since last week, Palestinians have been violently clashing with Israeli security forces because Israel had finally installed metal detectors and additional security cameras at the entrance to Temple Mount, the holy site to Jews and Muslim.  Israel has installed them to prevent terrorist attacks only after Muslims carried weapons into the al-Aqsa mosque to kill three Israeli soldiers.

Similar and much stricter security measures exist in Mecca and are present at major mosques in the Muslim world.  Nonetheless, the Palestinians are using deadly violence to force Israel to remove the metal detectors.  They are violently rioting again because they know that no matter what President Trump says, the State Department most likely, as evidenced in the latest report, would claim Israel efforts to prevent terrorism on Temple Mount as “the driver” of Palestinian violence.

*This commentary was published by American Thinker on July 22, 2017