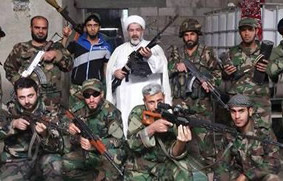 Left: Group picture of Shi’ite foreign fighters in the Abu al-Fadhel al-Abbas Brigade, a military unit composed mainly of militia operatives from Iraq. In white is Qasim al-Ta’i, a prominent Shi’ite Iraqi cleric who recruits Shi’ite operatives for the fighting in Syria (Facebook page in Farsi dedicated to the Shi’ite fighters in Syria).

The Arab Spring, the killing of Osama bin Laden and the war in Syria have contributed to the rapid escalation in the number of Sunni and Shia jihadists. Their threat expands far beyond the Arab countries to the rest of the world.

During the Soviet-Afghan war, (1979-1989) jihadi operations were concentrated in Afghanistan.  In his book “Taliban,” Ahmed Rashid estimated that 35,000 Muslim radicals from 43 Muslim countries in the Middle East, North and East Africa, Central Asia and the Far East fought for the Afghan Mujahideen.  Eventually, Rashid said, “more than 100,000 Muslim radicals were to have direct contact with Pakistan and Afghanistan and be influenced by the jihad.” After the Soviets departed, tens upon tens of thousands of jihadis went home to spread violent Islamism. Afghanistan’s role as cradle of jihadism continued through the period of U.S. and NATO involvement, to this day.

When Bosnia as Yugoslavia broke up, foreign jihadists–their numbers vary from 300 to 6,000, depending on whom you ask–formed the unit Kateebat al-Mujahideen (Battalion of the Holy Warriors), otherwise known as “El Mudzahid,” as part of the Bosnian army. The Sunni jihadists were supported by the Saudis, while the Iranian supplied Bosniaks generally with arms and food and sent Hezbollah to join the fighting. (Shi’as make up only 7 percent of the Bosnian population.)  Gordon Bardos reports that towards the end of the war and to this day some 86 percent of Bosniaks have a favorable view of Iran. Iran has bought influence in Bosnia, as it has done elsewhere, by supporting Islamists irrespective of sect and governments irrespective of their commitment to Islam.  Sooner or later, Iran clearly hopes to install Hezbollah in the Balkans as a threat to Western Europe.

During U.S. involvement in Iraq some 10 percent of the 30,000 insurgents fighting the U.S. and its Iraqi allies were foreign Islamist fighters.  The bulk of the foreign jihadis were Saudi Wahhabi and the rest almost entirely Sunni (Source: Guardian UK, page no longer available.)

The “Arab Spring” in Libya and Egypt enticed new generation of young Muslims to jihad. And the Syrian civil war provided opportunities to fight and to train by al Qaeda and Hezbollah.

At least 11,000 Sunni foreign fighters are among the 100,000 rebels fighting Assad. Conflicts among various Sunni groups like al Qaeda and ISIS, and between the Sunnis and secular rebels have garnered a good deal of attention.  As in Bosnia, Iran is not only backing, supplying, and training jihadists to join Hezbollah and fight for Assad, but it also recruits and trains growing numbers of foreign fighters to join the jihad beyond Syria.

1. This study examines the presence of Shi’ite foreign fighters operating in support of the Syrian regime. Their numbers are increasing, and in our assessment today there are at least 7,000-8,000,[1] including several thousand Hezbollah fighters (whose numbers change from time to time). The overall number includes several thousand Shi’ite Iraqi operatives organized into military units, the most prominent of which is the Abu al-Fadhel al-Abbas Brigade. In addition to the hard core of Hezbollah and Iraqi Shi’ite fighters, there are several hundred Shi’ite foreign fighters from the Shi’ite communities in Arab and Muslim countries such as Bahrain, Yemen (Houthi rebels), Kuwait, Saudi Arabia, Pakistan and Afghanistan.

2. The conclusion drawn from this study is that Iran is primarily responsible for the presence of the Shi’ite foreign fighters from around Arab-Muslim world who fight in the service of the Assad regime in Syria. Iran supports them not only by providing religious justification, but money and equipment as well. In addition, in our assessment Iran is involved in operating the Shi’ite military units in collaboration and close coordination with the Syrian army and the Assad regime’s security forces. Handling Hezbollah and the other Shi’ite foreign fighters in Syria follows Iran’s strategy of supporting the Syrian regime through proxies, limiting its own direct military intervention in the fighting.

3. The direct Iranian involvement in the Syrian civil war, is, in our assessment, several hundred soldiers, primarily members of the Iranian Islamic Revolutionary Guards’ (IIRG) Qods Force. The Qods Force is an elite unit whose tasks include support for the Syrian regime and the subversion of Shi’ite communities around the Arab-Muslim world. (Recently the Qods Force was involved in an attempt to smuggle weapons from Syria to the Gaza Strip by sea.) Iranian support for the Syrian regime includes establishing militia units of Shi’ites and Alawites; providing weapons, military advice, guidance and training; as well as economic aid and political and propaganda support. The Qods Force, which has strong contacts with the Hezbollah and Iraqi Shi’ite militias, recruits and handles Shi’ite foreign fighters in Iraq, Lebanon and other countries. Thus Iran’s extensive support (alongside Russia’s) is a strategic prop, enabling the Syrian regime to survive in the civil war whose end is not in sight and whose outcome is not clear.

4. Hezbollah’s operatives make up a skilled military force, well motivated and loyal to the Syrian regime. Hezbollah forces in Syria are handled through close collaboration with the Syrian security forces (according to the Kuwaiti newspaper Al-Ra’i, the Syrian army and Hezbollah maintain a joint operation room). Hezbollah operatives played an important role in the successful and strategically important campaign for the city of Al-Qusayr in the summer of 2013, suffering heavy losses until the city was conquered by Hezbollah on June 5, 2013.[2] Over the past few months Hezbollah operatives have been integrated into the supporting units of the Syrian army’s campaigns in the rural areas east of Damascus; the areas around Aleppo; and the ongoing campaign along the Syria-Lebanon border (the Al-Qalamoun mountains, especially the city of Yabrud, which according to the media the Syrian forces, with Hezbollah backup, are about to complete their takeover). Hezbollah considers the Al-Qalamoun mountains, mainly the city of Yabrud, as the region from which the organizations affiliated with Al-Qaeda dispatch their car bombs and suicide bombers to Lebanon.

5. The Shi’ite units operating in Syria are sometimes heterogeneous and composed of Shi’ite foreign fighters from various countries. In some instances the units are homogeneous, especially when the foreign fighters are Iraqi and originated in the Shi’ite militias that waged a guerilla war against the American army and its allies (until the United States withdrew from Iran at the end of 2011). Prominent among the Iraqi units is the Abu al-Fadhel al-Abbas Brigade; smaller Shi’ite units fight alongside it. Despite the guerilla experience of the Iraqi foreign fighters, in our assessment they are less proficient as fighters than Hezbollah. However, the Shi’ite foreign fighters play an important role in defending the religious sites sacred to Shi’a, especially the grave of Al-Set Zaynab, south of Damascus.[3]

6. The presence of Shi’ite foreign fighters in Syria has several ramifications: Hezbollah and other Shi’ite fighters support the Syrian security forces and improve their ability to fight the rebels. To a certain extent, in our assessment, they balance the involvement of foreign Sunni jihadists in Syria, and at the same time greatly complicate the civil war and intensify its religious-sectarian nature. In addition, Hezbollah’s involvement in Syria has resulted in the trickling of Al-Qaeda and global jihad terrorism into Lebanon, threatening to undermine Lebanon’s already fragile internal stability and possibly eroding Hezbollah’s status. It might also aggravate the Arab-Muslim Sunni-Shi’ite rift. In our assessment, Iran might profit from the involvement of Shi’ite foreign fighters in Syria when they return to their countries of origin, especially Iraq. Their return is liable to create for the Iranians, especially the Qods Force, ready-made networks of trained, battle-experienced fighters that can be leveraged by Iran for its terrorism and subversive activities.

7. This study is divided into three sections:

* The full version of this study is being translated and will shortly appear on our website.

[1]Western sources place the numbers higher. According to researcher Aaron Y. Zelin of the Washington Institute, the largest figure places them at10,000. According to information received from Shi’ites who fought in Syria, in June 2013, there were more than 10,000 foreign Shi’ite operatives (The Guardian, July 4, 2013). The London-based Arabic newspaper Al-Sharq Al-Awsat, quoting “Western experts,” recently claimed that there were more than 40,000 Shi’ite operatives (Al-Sharq Al-Awsat, February 19, 2014); in our assessment the number is greatly exaggerated.

[3]The grave of Al-Set Zaynab is located south of Damascus and considered the Syrian site most holy to Shi’ite Muslims. According to one version, it is the grave of Zaynab, the daughter of Sheikh Ali bin Abu Talib, Muhammad’s cousin and son-in-law. Shi’ites consider her as a model of perfection and a role model. The compound of her grave was under constant military pressure from the Syrian rebels, especially the organizations affiliated with Al-Qaeda and the global jihad. The slogan “Zaynab will not fall again” became a battle cry for Hezbollah and its supporters during the civil war and the defense of the grave became the main political and religious justification for Hezbollah’s and Iraqi Shi’ites’ involvement in the fighting (See below for information about other Shi’ite holy sites defended by Hezbollah operatives and Shi’ite foreign fighters.)