Shall We Kiss Egypt Goodbye? 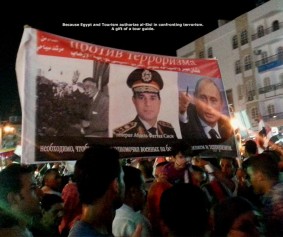 “You left the Egyptians, you turned your back on the Egyptians, and they won’t forget that.” Gen. Abdel Fattah al-Sisi.  Quoted by Kelly McParland, National Post (Canada), 8 August 2013.

In mid-August 2013 Egyptian newspapers reported that following a “hurried session” the Kremlin had offered its own military facilities to the Egyptian military.  The offer came in response to the Obama administration’s cancelling of the annual joint military exercises held in Egypt’s Western Desert that involved military units of the United States and Egypt.

There was mention that Egypt would soon benefit from Russian arms sales paid for by Saudi Arabia — a move that resulted from the waning of United States support for an Egyptian government in the wake of the 3 July ouster of President Morsi and his Muslim Brotherhood (Ikhwan al-Muslimun).  The same Egyptian media claimed that Russia’s Vladimir Putin would soon visit Cairo to demonstrate Russian support for Egyptian strongman and Defense Minister General Abdel Fattah El-Sisi and his effort to crush the Ikhwan.  Al-Sisi reportedly had instituted a change of policy in response to United States support (intended or not) for Islamist forces active in Egypt, Libya and Syria.  And Putin, who has proved over time to be determined to extirpate the radical Islamists active in Russia’s Caucasus, seemed an obvious counterbalance.

In Washington, no obvious move was made to neutralize the Russian policy.  Instead, the Obama administration seethed over Russia’s decision to grant asylum to the US intelligence contractor Edward Snowdon, who sought to escape trial on charges of espionage.

A REMEMBRANCE OF THINGS PAST

Recent US foreign policy moves vis-a-vis Egypt and the Middle East are a painful reminder of the failure of Secretary of State John Foster Dulles’ foreign policy that occurred in the nineteen fifties.

It will be recalled that in 1952 a cabal of “Free Officers” engineered a coup that ousted Egypt’s King Faruq.  In 1954 the cabal leader, the 36 year-old Colonel Gamal Abdel Nasser, was named prime minister and then president of Egypt.

In 1953 the military junta that had just seized power in Egypt sought to purchase arms from the United States.  In Washington the Pentagon response was that while the US would consider arms shipments it would do so only after a Mutual Security Pact sealed a military relationship between the two countries.  After that, American weapons then could be delivered free of charge.  The Pentagon also added another condition: American military experts had to accompany the weapons, and once delivered they could never be used against an ally of the United States.  Egypt refused the offer, explaining that it sought to purchase weapons but wanted no agreement that would impinge on its independence.  Having failed in Washington, Egypt contacted the Soviet Union.  The Soviet Union, while interested, did not move to arm Egypt until an agreement was reached at the Bandung Non-Aligned conference in early 1955; during that meeting Egypt’s Nasser met with China’s Chou en-Lai who served the Kremlin as an intermediary.  An arms deal was concluded, and the first shipment of Soviet arms (from Czechoslovakia) arrived in September 1955.

Once the arms deal with the Soviet Union was made, Nasser made no effort to disguise a change in foreign policy.   In response, Dulles announced the United States had withdrawn its offer to help finance the construction of the Aswan High Dam.  A week later, Nasser declared the nationalization of the Suez Canal.  Ironically, he then managed to survive thanks to US President Eisenhower who checkmated an invasion of French, British and Israeli forces. When the United States did not press its advantage, the Soviet Union took charge of the financing and construction of the dam, and the Soviet presence in Egypt would remain paramount until the early nineteen seventies when Anwar Sadat succeeded Nasser.

History never repeats itself exactly.  Still, the United States now seems poised to destroy its close relationship with Egypt.  It appears obvious that the Obama administration wants no part of Sisi, a man whose leadership could bring internal peace and economic stability to Egypt. (Shades of John Foster Dulles!)

Although Russia (and Saudi Arabia) quietly go about their business with Egypt, it is interesting to note that following the announcement that the US was reducing aid to Egypt; Egyptian stocks jumped 2.2 percent on Thursday.  Stocks reached their highest level since September 2012.  Cairo media brushed aside the importance of US aid, and reportedly investors now believe that the nation’s economic future should be tied to Egypt’s Gulf allies.  It is pointed out that the market itself has rallied since Morsi was deposed in July. (See “Mideast Stocks – Egypt Surges…,” Reuters, 10/10/2013.)

Finally, and importantly, Washington has not made it clear if the reduction in foreign aid in any way impacts the historic Camp David Accords and the agreement to provide annually both Israel and Egypt ($1.8 billion) with funds that have been utilized by their respective military.  The elimination of such funding could place the Sinai agreements in jeopardy and result in the elimination of the US-sponsored Multinational Force and Observers who presently help to keep the peace in the Sinai.

J. Millar Burr, a frequent contributor to this Blog, is a Senior Fellow at the ACD.