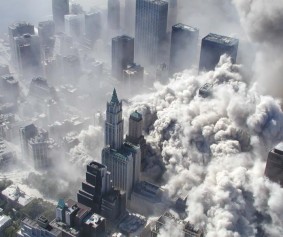 It took only four-and-a-half years to undermine the stature of the U.S. as a superpower. This was achieved not by Osama bin Laden and the September 11, 2001, attacks on America, but by our “change”-seeking elected president.

Squandering America’s reputation has made the country more vulnerable to attacks from within–by “homegrown” terrorists–and from without by North Korea, Iran and others. It will be difficult to recover from the damage caused by Barack Hussein Obama. The confidence that the U.S. is a force to be reckoned with seems a thing of the past.

There is, however, a good deal that can be done in preparing for the reassertion of U.S. power and re-entry into the world. That’s where our concentration should be. If 9/11 was a “never again” moment, now’s finally the time to see to that. Put Obama on the sidelines.

Since Obama’s Cairo speech of 2009, official America has pushed us away from the obvious lessons of 9/11–the principal ones being who the real perpetrators were, how they came to be, and what the world they came from was becoming. Accordingly, now would be a good time to stop praising “political Islam” and humoring the Muslim community both here and abroad. Just as it has for even longer in Europe, it has done us no good whatsoever. Where is there any evidence of Muslim good will or their contribution to stability and rule of law?

It’s time to put the adjective “Islamist” back in front of the noun “terror” in recognition that Islamists present the chief threat to the U.S. We should school our “counterterrorism” experts in law enforcement and the military forces on Islamist ideology first and foremost. Political correctness has to give way to political reality.

If American Muslim communities, including their mosques, have spawned and are likely to spawn more individual terrorists and terrorist cells (and continue to fund Islamist groups abroad), they need to be handled in the manner in which the intelligence office of the New York Police Department and the New York office of the FBI have been operating. Awareness and local action has to be our focus, not making infinite piles of raw data at the NSA and allowing White House decisions as to what threat to acknowledge or, more likely, to ignore.

It’s also time to admit that there is no half-way-organized Muslim political force in the world that is not Islamist and bent on our destruction. That’s what the Muslim Brotherhood (al-Ikhwan al-Muslimun, i.e., The Society of the Muslim Brothers) has preached from its inception in Egypt in1928. That Obama chose to make the Brothers beneficiary of a policy that hoped to turn political Islam in our favor has been a colossal folly. Surely, there are individual Muslims who want democracy and individual rights, but organized Muslims clearly do not.

We must also acknowledge publicly the intentions and behavior of Muslim states. This means publicly revealing state support for the spread of Islamist ideology and jihad. The list should include Saudi Arabia and the Gulf States, as well as Iran and all other self-identified Muslim states.

An effective policy regarding Iran’s nuclear ambitions and its aggression in the Eastern Mediterranean should be adopted before the Russians and North Koreans send advanced air-defense systems to Tehran and Hezbollah.

While there may be little we can do to make up for our blunder of leaving Iraq to Iran and handing over Afghanistan to the Taliban, there are things we can do in Syria and Iraq in support of the Kurds and non-al-Qaeda rebels. And we can surely guarantee the defense of Israel and Jordan and let the world know we’re doing so.

To project renewed power, the U.S. must move to energy independence as soon as physically possible and stop paying bribes to our adversaries. Accordingly, it’s time to recognize that our future well-being does not depend on withdrawal from the world. Submitting to the UN Security Council, ad-hoc “coalitions of the willing” drawn from EU countries committed to “internationalist” approaches to the affairs of states, or the Arab League. As in the past, our future depends on military power and the willingness to use it.

The American people have allowed themselves to be hoodwinked by Obama et al., into believing that the post-9/11 costs of foreign interventions in blood and treasure have been too high, thus demeaning those who sacrificed their lives to protect us. Now the isolationist right has seen fit to beat the same drum. The short-sightedness of this is staggering.

If the “post-colonial” Middle East was bound to fly apart sooner or later, why has the reality of that been denied? Iran post-1979 surely should have been expected to make the Sunni-Shia rivalry into an actual conflict and acquire the means to become more than just a nuisance to the United States. Yet, there seem to be no plans to stop Iran, its exporting of arms and terror, and its bomb. Hezbollah and Iran have made common cause with drug lords all over Latin America to smuggle drugs and who knows what else into the U.S. Yet, nothing is done to stop that. At the same time, Afghanistan has become the largest producer in the world of opium and hashish that fund the Taliban and all other Islamist terrorists. And this, under the watchful eye of the U.S. and the Coalition forces. These mistakes have cost many American lives and trillions of dollars while strengthening our Islamist enemies.

It’s time to recover U.S. power and influence in the world. We have given the practitioners of asymmetrical, nontraditional warfare the upper hand against us and have done no more than to inconvenience ourselves regarding physical terror attack (consider the depredations of TSA, the lockdown of Boston, and the explosion of domestic spying), while our vulnerabilities to cyber and economic attack remain unattended. The mantras of “we can’t violate international law and norms” and “we won’t do anything without a UN mandate” have to be relegated to what’s become an embarrassing past.

Since the end of the Cold War, the international system has reverted to a struggle of all and against all. “Internationalism” is now a recipe for doing nothing, which appears to be the reason Barack Obama and the EU states are so fond of it. But the U.S. is still the only nation that can stand above the mess and Congress should act accordingly.

The change we need, that Obama et al. obviously do not want, should begin on September 11, 2013, with the U.S. Congress approving the Justice Against Terrorism Act (JASTA), whose sponsors are Rep. Peter King (R-NY) and Jerrold Nadler (D-NY), and Senator Charles Schumer (D- NY), who introduced (JASTA/S.1894) on November 17, 2011.

JASTA will amend “the federal judicial code to: (1) expand the liability of foreign states for tortious acts committed against U.S. citizens during a terrorist act and allow civil actions against a foreign state that are now pending or that were dismissed to proceed in accordance with such expanded liability; and (2) impose liability on a foreign state for the acts or omissions of its officials or employees while acting within the scope of their office or employment.”

And when Congress gets around to responding to Obama on Syria, it should demand what’s necessary to stop Assad’s chemical weapons use and other brutalities and keep the U.S. president from completing the emasculation of the strongest nation in the world–the nation he had sworn to lead and defend.

September 11, 2013, should mark the beginning of this great country’s stepping back from the abyss to reclaim its power to defend itself and regain the ability to deter its enemies.