Semantics? Not on our lives! 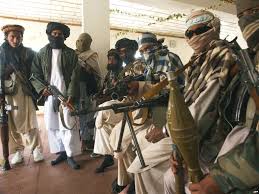 The most amateurish hacks performing as government spokesmen, whether it is an arrogant but totally incompetent campaign apparatchik at the State Department, the White House’s befuddled spokesmen, or the embarrassed uniformed presenter at The Pentagon, we have public figures stumbling all over themselves. They are trying to follow President Barak Hussein Obama’s dictum that there is no relationship between Islam and terrorism — and even if there were, it shouldn’t be named. Furthermore, the Administration insists the war on terrorism is winding down because of precipitant withdrawals from Iraq and Afghanistan. And, anyway, the world situation is better than the President found it six years ago. So there!

Never mind that on a daily basis the public – and the kept Washington capital media – have abundant proof that this just isn’t the case.

At almost the very moment the White House spokesman was declaring that the Afghanistan Taliban – against whom the U.S. went to war after 9/11 – were “armed insurgents” and not “terrorists” just such a terrorist act took place. Two American airmen were killed in a suicide bomber attack at Bagram on the largest U.S. base in Afghanistan. But, after all, a similar attack in 2009 at Fort Hood by a member of the U.S. military itself is listed still no more than “workplace violence”.

Obama holds that these are criminal acts by which definition the Administration seeks to shepherd captured perpetrators to arraignment in Stateside courts if they are not wiped out by drones [with their intelligence harvest]. Incarceration as prisoners of war at Guantanamo is said to inflame terrorist — woops! – Further criminal activity, even though, of course, the Cuban internment base did not exist on 9/11.

There is the slight problem that almost as the White House spokesmen spoke, two American soldiers were killed at Bagram, the largest base of retreating American troops in Afghanistan. But by some incredible sophistry, they could not have been killed by terrorists.

It could be argued that this scene is so farcical that it is irrelevant. What difference does it make that the Administration refuses to use “Islam” in relation to “terrorists” it denies exist?

There are two critical sets of arguments for why these semantics are more than phraseology of poor wordsmiths in the rarefied otherworldly Inside the Beltway Washington environment. They will cost further American lives.

1] To defend the U.S. against either “lone wolf” attacks such as occurred at Fort Hood or in Boston at the Marathon, U.S. officials must know as much as possible about the potential enemy. Discovery and dismantling his plots – whether they be shoesole bombs on a plane over Detroit or a car-bomb aimed at Times Square – demand a vast array of information and access to the innermost mental processes of the plotters.

That is only possible with intellectual integrity as well as pursuit of information through the normal means of “intelligence gathering” wherever it may lead. The terrorists are not just any political, economic or social group. What they have in common is dedications to what they believe are the principles of Islam. Recognizing that and understanding as much as possible about it requires a frank assumption that Islam does play a role in their conceptions and actions. That has to be identified and pursued if a maximum effort at protection, defense and ultimate destruction of the threat, is to be assured. Calling it by misleading equivocal terminology is not only useless but it tends to deflect what must be the most serious and thorough investigation of motivation as well as method for terrorist acts.

2] A second and generally unrecognized aspect which even the President’s critics often ignore is that in the long run, a solution to Islamic radicalism and terrorism must come from the 1.3 billion Muslims themselves. As in any other society – does one have to recall Nazi Germany? – It can well be argued that most Muslims oppose the terrorists. But to take up arms, either intellectually or physically, against them, is to expect what rarely happens in any society under siege by a ruthless internal enemy. To continue to ignore this aspect of the fight against Islamic terrorism is to limit any struggles’ effectiveness and to postpone the day when it will at last be defeated. The long struggle against Soviet Communism, despite Pres. Ronald Reagan’s ultimately determined and public effort to stigmatize and isolate it, finally came as an implosion inside the Russian, East and Central European societies themselves.

The analogies to Communism’s relatively short history, of course, are deeply flawed. For we are talking of returning Islam to a debate which it abandoned a thousand years ago when it, like Judaism and Christianity, came up against the secular learning and liberation of Greek and other Western philosophical thought. But there will be no end to Islamic terrorism until there is a return to that debate among Muslims with a modernization of their thought and practices, which abandons the totalitarian aspects of their religion.

However the West may lament the absence of more voices in the umma, the community of Islamic believers, publicly taking on this debate, there are lone courageous critics who call for just such a reformation of Islamic thought which would doom the terrorists. The remarkable call by Egyptian Pres. Gen. Abdel Fattah el-Sisi, delivered personally, to the religious leaders of Al-Azhar University, the traditional intellectual center of the Islamic world, was one of those. Not only was it generally ignored in the West, but also official Washington continues to flirt with the Muslim Brotherhood, el-Sisi’s bitter enemies and the one-man-one-vote-one time regime he overthrew with the general support of the Egyptian people.

By refusing to name names and discuss the struggle inside Islam – which must begin with the proper identification of the terrorists – the Obama policy is ignoring if not abandoning those critics of the terrorists inside Islam who must in the end defeat it. There are few if any Muslim leaders in whatever country do not understand that U.S. policy has thus far left them to their own devices in any such internal conflict, whether in Iran during the 2009 Green Movement or now in Egypt. [Yes, el-Sisi runs is religious and runs an authoritarian government, but so much the more reason for the U.S. to befriend him and seek to modify the nature of the regime which, ipso facto, it must now give tacit support to in the Mideast chaos.]

Just as it took a vast intellectual war from beyond its borders to bring down Communism and the Soviet Bloc, it takes a clear-eyed intellectual and propaganda effort from the West and the non-Islamic world in a similar campaign if Islamic terrorism is to be defeated. A part of that effort must be straight talk from U.S. spokesmen.