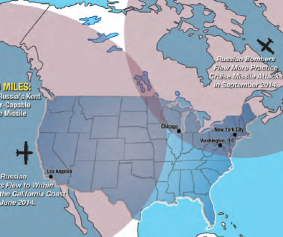 The end of the Cold War brought many changes including the unification of Germany, the expansion of democracy into Eastern Europe, and the integration of Russia into the global economy. It also removed the previous five-decades-long worry about a nuclear war. “Thinking about the unthinkable,” that is, seriously contemplating nuclear war, has all but vanished from the minds of most people.

But given Vladimir Putin’s annexing of Crimea last spring and his boast in September that he could invade five NATO capitals inside two days, a Cold War 2.0 may be just around the corner. Putin’s actions come on the heels of the modernization of Russia’s nuclear weapons program. In stark contrast, the nuclear weapons research, testing, and production infrastructures of the United States have to decline through elimination and restructuring of organizations and reductions of workforces and budgets. These trends must be examined and evaluated. They certainly cannot be ignored.

Russia’s recent actions to demonstrate its independence, military prowess, and new economic power are troubling. These actions include probes by Russian strategic bombers of U.S. naval operations and air defenses around Alaska, Canada, Greenland, and Great Britain; large joint exercises involving Russian and Chinese armed forces; Russia’s continued support of Iran’s nuclear ambitions; explicit nuclear threats against Poland for accepting a missile defense base on Polish territory; the military incursions into the Republic of Georgia; and more recently, the illegal seizure of Crimea from the Ukraine.

In March 2014, during the crisis in Crimea, Russian spokesman Dmitry Kiselyov starkly reminded the United States that, “Russia is the only country in the world that is realistically capable of turning the United States into radioactive ash.” In December 2013 President Putin had named Kiselyov to head a new state news agency charged with portraying Russia in the “most positive light.”

Russian Chief of Staff General Yuri Baluyevsky bluntly stated Russia’s policy on the use of nuclear weapons: “We do not intend to attack anyone, but we consider it necessary for all our partners in the world community to clearly understand. . . that to defend the sovereignty and territorial integrity of Russia and its allies, military forces will be used preventively, including the use of nuclear weapons.” [Emphasis added.]

Immediately, many Western policy analysts concluded that Baluyevsky’s remarks did not really constitute a shift in Russian policy. However, even a casual observer must consider the policy in the context of the significant modernization now on-going in Russian tactical and strategic nuclear forces and the disturbing increases in Russian probing of Western defenses and resolve.

While the Russian military holds a positive view of nuclear weapons, these weapons have lost support within elements of U.S. armed forces assigned residual responsibility for them. For example, in August 2007, six nuclear weapons were accidentally loaded on a B-52 strategic bomber at Minot Air Force Base (AFB), North Dakota, and flown to Barksdale AFB, Louisiana, where they sat on the tarmac unnoticed for 36 hours.

The Defense Science Board, charged with investigating the incident, concluded that commingling nuclear forces with nonnuclear organizations has led to “markedly reduced levels of leadership whose daily focus is the nuclear enterprise and a general devaluation of the nuclear mission and those who perform the mission.” Obviously, the mishaps of a few should not be used to denigrate the commitment of whole commands. However, nuclear weapons, which were designed to prevent war, arguably have never been popular with the majority of military officers, whose careers are often defined by their execution of war and not their maintenance of peace. Clearly, sitting in a silo watching over a 30-something-year-old nuclear-tipped missile under an aged banner declaring “Peace Is Our Profession” is not as exciting and ribbon-garnering as flying a new F-22 Raptor air-superiority fighter into combat. On the positive side, General Norton Schwartz, at that time the U.S. Air Force Chief of Staff, declared the reinvigoration of the Air Force’s nuclear enterprise was his “number one priority.”

Unfortunately, several recent widely publicized events, such as one at Malmstrom AFB in Montana, suggest that this “reinvigoration” has not been realized. In January of this year, more than 90 Malmstrom missileers, officers in charge of nuclear-armed ballistic missiles, were suspended for cheating or condoning cheating on monthly proficiency exams. The cheating was revealed during an investigation of illegal drug use and involved nearly half of the base’s missile launch crew.

… The Bear Comes Out of Hibernation

Since then there have been more than 50 instances of Russia’s ignoring the post–Cold War practice. On June 13, 2014, Russian Tu-95 bombers, which can carry nuclear weapons such as the Russian AS-15 Kent cruise missile, with a range of 1,800 miles, flew to within only 50 miles of the California coast, close enough to threaten large U.S. cities in states as far east as Minnesota, Iowa, and Missouri. It was the closest a Russian aircraft had come to California since July 2012.

Then in September 2014, Russian bombers flew a similarly aggressive mission off the northeast coast of Canada. They came close enough that their cruise missiles could have reached Chicago, New York City, and Washington, D.C.

It is not known if the Tu-95s were armed with nuclear weapons on either of these occasions. The Tu-95s can legally come inside the U.S. air defense identification zone, which extends 200 miles from the coastline and is part of international airspace. Foreign air craft are required to identify themselves inside the zone. U.S. sovereign airspace, which foreign military aircraft may not enter without permission, extends 12 miles beyond the coast.