Russia: The Geopolitics of Natural Gas 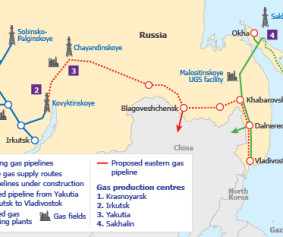 Russia’s economic weakness lies in its dependency on natural gas, which represents nearly 60 percent of its exports. This dependency, which led Senator John McCain to describe Russia as “a gas station masquerading as a country,” should make economic sanctions an effective way for the West to stall or reverse Russian aggression in Crimea/Ukraine.  But since Russia presently commands some 38.7 percent of Europe’s natural gas market, no one expects the Europeans to enforce biting sanctions.

Russia’s aggression in Ukraine seems to have challenged the Europeans to look for new energy supplies that eventually will end that dependency. “Eventually” is the key word.  It will be a while before fracking develops and alternative sources will replace Russian gas. Meanwhile, Putin is ahead of the West in bolstering both current and potential markets for his natural gas and oil.  The new venues will allow Russia to ignore Western sanctions and continue the absorption of neighboring territory.

In recent weeks there were six important regional developments in South Asia, the Levant, Europe and China/East Asia involving the future exportation of Russia’s natural gas and the strengthening of the country’s economy.  Following are headlines that accompanied each event:

Purchasing Kyrgyzgas turns Russia into a player in a major South Asian natural gas pipeline. The Turkmenistan-China natural gas pipeline was commissioned in 2009  and has a completion date of 2016.  When completed, the pipeline which makes use of a Turkmenistan-Uzbekistan-Tajikistan-Kyrgyzstan-China route will deliver to China an estimated 65 billion m3/yr.  In addition, Kyrgyzstan President Atambayev recently announced that an agreement had been reached whereby China would provide $2 billion in financing to construct a Kyrgyzstan arm (a “fourth direction”) that would both comply with and augment the original project.  With the construction of the pipeline Turkmenistan will overtake Russia as China’s predominant source of natural gas.  And the export of 65 billion cubic meters per annum would provide more than half of China’s yearly need.  As China was a market that Russia had sought to penetrate, the purchase of Kyrgyzsgas just might provide Russia’s Gazprom, Russia’s dominant natural gas producer, the opening it had longed for. Gazprom bought 100 percent of shares of Kyrgyzgaz for $1 and assumed the responsibility to retire the debt of $40 million that Kyrgyzgas owed. In addition, Gazprom promised to invest $560 million over the next five years to upgrade a 700 kilometer gas distribution grid.  Finally, Kyrgyzgaz is to be renamed Gazprom-Kyrgyzstan.

Last week Turkey publicly endorsed Russia’s South Stream gas pipeline, and seemed ready to allow the pipeline to move gas from south Asia through Turkey to central and western Europe.  The approval was seen in Israel as having a potential impact on that nation¹s effort to build a natural gas market in Europe. Israel’s “Leviathan gas reserve discovered off the coast of Israel” could help reduce Europe¹s dependency on Russian natural gas supply.

Resources-starved Turkey¹s use of natural gas accounts for a third of its total primary energy supply. Consequently, it is now one of the largest markets for natural gas among NATO nations. The growing demand led to discussions between Turkey and Israel.   Discussions are underway for constructing a $2.2 billion subsea pipeline from the Israel, to supply Turkey’s growing demand for natural gas for 25 years.  The deal would normalize Turkey-Israel ties and promote greater economic cooperation. “High-level negotiations on resolving political issues, and lower-level negotiations aimed at making progress on energy have always been held,” between Turkey and Israel. “Normalization of relations will pave the way for investment and cooperation on energy.”

It has been posited that Israel’s gas find will improve Europe’s present condition by providing a reliable alternative to the position of strength now held by Gazprom.  However, just how Israeli gas will be piped or moved by ship to the European market must still be decided.  Meanwhile, Israel Business has declared, “it is safe to assume Putin will have no problem finding a political precedent to prevent Israel’s pipeline through Turkey.”  Indeed, Gazprom itself is attempting to secure its relationship as Western Europe’s dominant natural gas source; essentially, it must as the resource is the nation’s dominant export, accounting for about sixty percent of all of Russia’s total exports.

Royal Dutch Shell’s CEO Ben Van Beurden met in Moscow with Russian President Vladimir Putin to discuss events in Europe — particularly in the Ukraine. A report indicates that the two sides agreed that the Ukraine issue would not affect their ongoing agreement that would enhance the distribution of Russia’s natural gas to Europe.  The contract with Shell was secure. Importantly, Van Beurden “reaffirmed the company¹s commitment to develop Russia’s only liquefied natural gas (LNG) plant with Gazprom.”

In what can only be described as sycophancy carried to an extreme, Van Beurden added, “We also know that this is going to be a project that will need strong support to succeed. So one of my purposes of meeting with you, Mr. President, is to also secure support for the way forward on this project.”  Van Beurden was in fact doubling down, adding, “Now is the time to expand this lucrative project, we will need strong support to make it a success.”  It was then concluded that Putin was pleased that Shell would continue its work in Russia.

In a move designed to make feasible the construction of a gas pipeline from Russia through North Korea to South Korea, the Russian Parliament has announced that it has written off nearly $10 billion of North Korea’s debt assumed during the Soviet era.  In what appears an obvious quid pro quo, “The rest of the debt, $1.09 billion, would be redeemed during the next 20 years, to be paid in equal installments every six months. The outstanding debt owed by North Korea will be managed by Russia’s state development bank,Vnesheconombank.”  The funds received by Russia would in turn be used to fund projects in North Korea, “including a proposed gas pipeline and a railway to South Korea.” It is noted that the two Koreas “remain technically at war”, it is Gazprom’s expectation that the impoverished north will not object to a pipeline that could return certain benefits.  Gazprom has “long planned” to build a natural gas pipeline to the industrially developed South Korea, and only a small percentage of the shipment of 10 billion cubic meters per annum would be siphoned off by North Korea.

India: $30 Billion Oil Pipeline to Be Built from Russia to India through Northwest China

Russia and India are about to conclude negotiations to construct a pipeline from the Russia’s Altai mountain region to north-west of China and from there to the north of India.  “The project is beneficial for both India and China, as it would allow China to become an oil transit in addition to its ‘status’ of recipient of the Russian oil.” The preliminary cost of the pipeline’s construction, planned for completion by 2020-2022, is estimated at $30 billion. This pipeline would open the Shanghai Cooperation Organization (SCO) market, which also includes Pakistan, Mongolia and Vietnam, to Russian energy supplies and could embolden Putin’s determination to expand Russian sovereignty westward.

The ten-years-negotiated Eastern Siberia-Pacific Ocean (ESPO) gas pipeline between Russia and China is expected to be agreed upon before Vladimir Putin visits Beijing in May. China held out until the Russians agreed to lower the price of the 30-year deal, which will “supply 38 billion cubic meters (1.3 trillion cubic feet) of natural gas a year to China by pipeline.” While this is only a quarter of the gas Russia now sells to Europe, China’s growing appetite for natural gas is expected to quickly rise after the pipeline becomes operational in 2018. All of the above attests to the folly of thinking that Putin and Russia can be cornered economically in the foreseeable future.