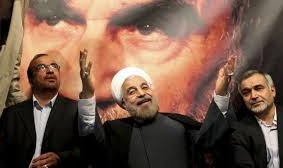 Mahmoud Ahmadinejad, Iran’s outgoing president boasted on a televised interview on July 6, that his outgoing administration is leaving behind a stronger economy with more than $100 billion in foreign currency reserves, “of course if we include gold reserves,” which he described as “a gift for the next administration.”
Ahmadinejad had another parting gift to the Iranian people and the incoming administration. On July 7, he ordered the central bank to drastically devalue  the country’s currency.

On August 3, Iran’s incoming president, Hassan Rowhani, will be facing a demoralized nation, says a recent Gallup poll.”Half of Iranians say there have been times in the past year when they have had trouble paying for adequate shelter and for food their families needed. In each case, the 50% figure is the highest among 19 populations in the Middle East and North Africa region that Gallup surveyed in 2012 and 2013.”

Rowhani, Iran’s Supreme Leader Ali Hosseini Khamenei’s choice, has been readying himself to tackle the country’s economic problems with a team of neo-liberal economic thinkers.

From Niavaran Street to the president’s office –

During the campaign for president of Iran, Hassan Rowhani expressed views consistent with a liberal outlook on economy. The president-elect is an advocate of the economic policy pursued by former President Ali-Akbar Hashemi Rafsanjani, based on privatization, deregulation, and economic openness.

The conservative approach suggested that Islamic religious law is definitely in accord with the functioning of the market system and the principles of neoclassical analysis, arguing that the most important rights are property rights. Its supporters emphasized economic growth over social equality, explicitly recognized the profit motive, and accepted the market price mechanism as being fair and rational.