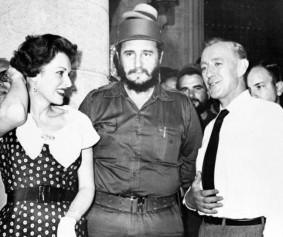 Review of The Longest Romance, The Mainstream Media and Fidel Castro by Humberto Fontova.

Humberto Fontova has written another book on the Cuban revolution and its aftermath, The Longest Romance, The Mainstream Media and Fidel Castro.[1] His words are bitter and angry; it is a book-long tirade against the media and the artsy Hollywood people who continue to support the Castro regime, even though he no longer degrades personalities like Angela Jolie or Gisele Bundchen, his new targets include Jack Nicholson, Danny Glover and Kris Kristofferson.

Mr. Fontova describes the horrors that have befallen the Cuban people, but I don’t know where he obtained these doubtful statistics. He writes that between 65,000 to 80,000 Cubans died trying to escape the island:

“the Castro brothers hit upon the expedient of having helicopters hover over the freedom-seekers, who often comprised whole families–but to hold off on shooting. Instead of machine-gunning the families to death as years of tradition called for, they switched to dropping sandbags on to the rickety rafts and tiny boats to demolish and sink them. Then the tiger sharks and hammerheads could do the Castroites’ deputy-work. Screams, groans and gurgles, after all, don’t carry nearly as far as machine-gun blasts.” (pg 23).

In 1961, he says, 350,000 Cubans were imprisoned in Castro’s dungeons.  Taking into account the difference in population of Cuba and the then Soviet Union, Mr. Fontova states the Cuban death toll under Castro was higher than during Stalin’s gulag. But then, Mr. Fontova’s statistics are exaggerated at best.

He treats Herbert Matthews harshly. For those who may not remember or heard of Matthews, he was a New York Times journalist who went into the Cuban mountains to interview Castro. At the time Castro was reported dead by the government. As he was alive and well, Matthews scored a scoop resulting in immense pro-Castro press coverage that followed, and as one journalist put it, “The New York Times won the Cuban Revolution.” And Matthews played it to the hilt until years later when his reports were found slanted in Castro’s favor.

Now, 60 years later, Mr. Fontova presents a radically different version of Matthews’s trip to interview Castro. It wasn’t dangerous at all. He writes that the trip was not only approved by President Batista, but he ordered a police escort to insure Matthews’s safety every inch of the way. Mr. Fontova writes this information is from a 1960 hearing of the Judiciary Committee of the U.S. Senate in which U.S. Ambassador Gardiner testified. This information conflicts with everything ever written about Matthews’s journey to Castro.

While Mr. Fontova belittles Mathews, he fails to tell readers it was the Cuban middle class that sponsored Matthews and later feted each journalist who followed and sang Castro’s praises. A myth was born and still lives.

For the first time, Mr. Fontova reached the conclusion that former President Batista wasn’t such a bad guy after all. Under his government, the Cuban currency was sound, the economy boomed, he “never saw a need to stop and fetch or roll over and beg in front of U.S. officials.” (pg 18)

It’s true as Mr. Fontova writes that the workers never supported Castro and his attempts at calling for a general strike were laughable. No one struck; business went on as usual to the revolutionary’s chagrin. Labor’s loyalty to the government was largely because of Eusebio Mujal, the head of the Confederation of Cuban Labor.  Mujal was a former communist.  It was said he fought with the Loyalists in the Spanish Civil War and it was there he became fed up communism. Perhaps it takes one to know one, and he could see the true nature of Castro far better than other Cubans and the American press.

But there was graft in Cuba under Batista, which was widely shared by middle class and wealthy Cubans.  For example, Mr. Fontova writes in the 1950s Cuban stevedores earned more per hour than their counterparts in New Orleans and San Francisco. But, uniquely, it was the stevedore’s job, not the stevedore, that earned the money. The job was purchased by a moneyed person and the sold and resold again, and when it came down to the stevedore, who finally did the work, the top dollar had been paid to the succession of job holders. The same was true with teacher positions.

But, as Mr. Fontova writes, Cuban labor had more rights than their American counterparts. For example, if a worker was employed for six weeks, he had acquired tenure and could not be terminated no matter how incompetent he was. The Bacardi Rum Company in Santiago de Cuba had a hall, filled with workers, reading newspapers and magazines, because they were found incompetent to work in the factory. Nevertheless, by law, they were kept on the payroll.

Che Guevara, who was commander of the La Cabana fortress, which held many of Castro’s prisoners, had a section of the wall torn out to better his view of his firing squads at work, often in the company of distinguished friends. Havana resident Ernest Hemingway was one of these.

George Plimpton, the American writer, was a friend of Hemingway, and the story, as related by Mr. Fontova comes from one of his sources.

“Hemingway invited Plimpton to Cuba. . . As Hemingway prepared a shaker of drinks for the outing, he told Plimpton he wanted to show him something. They got into a car with a few others and drove out of town, and when they arrived, they set up chairs and took out the drinks. Soon a truck arrived. It came, as Hemingway knew, the same time each day.  It stopped and men with guns got out. In the back were a dozen prisoners tied up.

“The men with guns hustled the prisoners out of the truck, lined them up and then shot them. They put the bodies back into the truck.”

But there is more.

“The Cuban Archive estimates that by the end of that year 2,000 Cubans had been murdered in the manner Ernest Hemingway loved to watch from his picnic chair while sipping mojitos.” (pg 80)

Mr. Fontova presents pictures of Cuba that never happened: When Castro began to confiscate farms, he writes, the enraged campesinos (farmers) rose in arms in thousands, and Castro murdered all who resisted. The resistance, 90 miles from the U.S. shores, involved ten times the number of rebels, ten times the number of casualties and more than twice the amount of time as the skirmish against Batista. Had the rebels gotten a fraction of the aid the Afghan Mujahedeen received, they would have been victorious.

I debriefed a Cuban “guerrilla,” who gone into the Sierra Escambray, with his rifle, and he was there for 18 months. But he never fired a shot. I asked him why he never fired his rifle.

“Senor,” he said, “If I had fired my rifle, the Army would know I was there. They would come and kill me.”

In ending this review, there is an incident Mr. Fontova writes about that concern a Jesuit priest. He had been to an execution ground where, after brief three minute trials, Castro’ guerrillas killed a number of policemen and town officials and dumped their bodies in mass graves. The priest had been permitted to hear the confessions of the condemned. He, later, tells his friend, “Who would lie upon his last confession? Why would these men lie to me? . . . .I can assure you that the Castroites are executing mostly innocent men.” (pg 68)

I happened to be present during this incident. It was not as Mr. Fontova states. It was shameful and revolting.

There was a cocktail party the day after the executions on San Juan Hill which the priest attended. The executions occurred the night before.  I listened to the firing and knew what was happening. Sleep escaped me that night. Nevertheless, I attended the cocktail party.

The little Jesuit priest in his heavy robe (I will not name him although Mr. Fontova has) came scurrying down the street to the party. He arrived breathless from his hurried pace. The partygoers gathered around him as they knew he had spent the night with the condemned and they wanted to know who had been killed. He read the names of the executed from a list he had prepared. He finished and remained silent for a moment and then said,

“They all deserved to die.”

I was revolted. I found it outrageous for a man of God to so condemn the dead. I went the bar and, alone, had a stiff drink, but it didn’t help one damn bit.

After Castro assumed power, there were similar pseudo-trials and circus-trials in which Batista officials, soldiers, policemen and civic servants were killed. There was no protest. Civic Resistance leaders were appointed to Castro’s government. The middle class applauded the new government. Then the confiscations and nationalization of property began. Ranchers, farmers, industrialists and real estate owners, etc., felt the blow, and the situation changed. The exodus of the exiles began.

When a people acquiesce, support or even vote for a government that emerges cruel and inhumane, those who put that government in power bear the blame for what they have done.