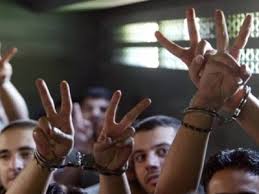 When we set free terrorists in order to bring home soldiers or civilians held by the enemy or to bring them to burial in Israel, we are sealing the fate of other Israelis to be killed by the terrorists who are being released.

Releasing terrorists results in Israeli deaths. When we set free terrorists in order to bring home soldiers or civilians held by the enemy, or to bring them to burial in Israel, we are sealing the fate of other Israelis to be killed by the terrorists who are being released or by those who are encouraged by their release to get involved in terrorism.

In effect, we are making a deal with ourselves: we buy the satisfaction of releasing someone whose name and picture we know and recognize for the price of the blood of Israelis who are anonymous at the time of the deal. We can make this deal as long as we are aware of its terrible cost and do not allow ourselves to comfortably repress the fact that the blood of these murders is on our hands because after all, we released these murderers and encouraged them to kill.

Palestinian society is addicted to terrorism. The murder of Jews, including innocent civilians within the Green Line is the key protagonist – and sometimes the only one – in their political culture. There is virtually no one who dares to confront the supreme status of the “shahid” (“martyr”) narrative. From the Grand Mufti of Jerusaelm Amin al-Husseini, through PLO Chairman Yasser Arafat, to the Palestinian elite and Joint Arab List MK Ahmad Tibi – this is the moral “North Star” of Palestinian nationalism. From children’s songs in kindergarten, to the names of the schools and summer camps and the graffiti and posters on the walls – this is the inspiration.

Even PA President Abbas, who in real-time opposed the Second Intifada in the early 2000s, acknowledged the destruction it brought to Palestinian society and actively fought against its full-scale adoption as a national strategy, cannot but set the terrorists in their various forms above our chiefest joy, and praise their deeds as exemplary for his youth.

The only way to combat Palestinian terrorism is through reliable and very painful deterrence. The realization of political aspirations (as with the Oslo Accords), a promising economy (as on the eve of the Second Intifada), massive withdrawal (as from Gaza), and favorable public opinion (as in Israel in the 1990s, Europe in the last generation and the Obama White House) only encourages it.

What shattered terrorism 15 years ago and has suppressed it ever since in the West Bank was the massive use of force and its constant upkeep in Palestinian population centers. Abu Mazen maintains the relative calm and his security forces cooperate with Israel only because Israel has demonstrated that the cost of terrorism is unbearable. In Gaza, it seems that massive and decisive suppression of terrorism is required – beyond what has been done up until now – in order to achieve greater relative and continual calm. In other words, the battle is over the Palestinian consciousness.

Releasing terrorists encourages terrorism more than anything else: the terrorist activists themselves, the supportive Palestinian society in whose name they operate, the leaders of Hamas and Islamic Jihad in Gaza, and those who present Abbas as a traitor for holding them back. Iran and Erdogan are also content. Releasing terrorists also encourages the Knesset members from the Joint List who praise them, support their funding, and lay on a hero’s reception for them. Their release encourages the thousands in Umm al-Fahm who came with Palestinian flags to pay final national respects to the murderers from their city who killed Druze Border Police offices operating on the Temple Mount to prevent terrorism. It also encourages the kidnapping of soldiers, civilians and bodies.

When it comes to soldiers that we send into battle, it is worth considerable releasing terrorists at a tolerable cost – but absolutely not the outrageous terms of the Schalit deal. When it comes to bodies and civilians who ended up in Gaza – the release of terrorists should not be considered. When it comes to information about their condition – merely entertaining the thought raises dangerous expectations.

Avoiding a deal comes with a painful price for the families and the circle of solidarity in Israel. We all hurt, and we must not take lightly the personal worry, longing, and sorrow. But it would be fitting that those who find it difficult to endure this pain consider the alternative cost: encouraging terrorism and the murder of Israelis that will certainly follow. Ignoring this bloody equation and repressing it in the public debate is tantamount to national recklessness.

*This commentary was published by Israel Hayom, on April 23, 2020