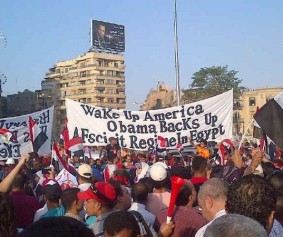 No one expected the United States to dismiss Morsi’s removal as “a domestic affair,” as the Sudanese have done, but Obama’s call on the Egyptian military “to return full authority back to a democratically elected civilian government as soon as possible,” raised some eyebrows.

was well on its way to further the repression of the people. Millions of them, however have had enough.

The will of the people, as expressed by millions of demonstrators in Egypt, was to remove Morsi and the Muslim Brotherhood from power.

The Egyptians learned the hard way that the Muslim Brotherhood’s “Islamic democracy” is nothing but a suppressive theocracy. Instead of reform, Mohamed Morsi was busy reinforcing “the Brotherhood’s grip on power and impose its strict version of Islam on Egyptians.”

New to the “democratic process,” they were not constrained by the rules that would have left Morsi in power until 2016, thus giving the Brotherhood enough time to establish an “Islamist oligarchy that would be very difficult to remove.” The people acted before it was too late.

Salah Salem, Al-Ahram analyst, explained yesterday, “that the current massive protests are not only about economic hardships, the lack of services and fuel shortages and power cuts, but represent a rejection of the ideology of the Muslim Brotherhood and its attempts to turn Egypt into an Islamist state.”

He is not the first U.S. president to fall for Islamist pretext of “Islamic Democracy.”

In 2006, when George W. Bush told Vladimir Putin that he hoped Russia would evolve into a democracy “like Iraq,” the Russian leader responded “We certainly would not want to have the same kind of democracy they have in Iraq.”

Thus, Obama’s statement that the participation of Egypt’s “religious” parties would create “the best foundation for lasting stability in Egypt… democratic political order,” is disconcerting.

Together with the international community, the U.S. should help Egyptian to move toward real democratic governance. More importantly and urgently, a well designed and monitored plan should help keep Egypt from starving and falling apart.  Even if Qatar and Saudi Arabia continue to support Egypt’s hard currency reserves, energy and food imports remain very low.

Norman Bailey gives a realistic assessment of the economic changes that need to occur if Egypt is to become stable under military or democratically elected regime.

The West Must Back the New Egypt**

The turnaround in Egypt is a once in a generation opportunity. Can Western, and Arab, leaders seize it?

The Egyptian army has ousted the elected Muslim Brotherhood president, Mohammed Morsi. Gigantic anti-Morsi demonstrations forced the hand of the armed forces. An interim, secular, government will take office, headed by the Chief Judge of the Constitutional Court. The parliament and the constitution are abolished. This is a huge setback for the Muslim Brotherhood and its Salafist allies. It is potentially a triumph for liberal, secular, Christian and mainstream Muslim Egyptians.

Now what? Egypt still faces a disastrous economic and financial crisis that cannot be put off for more than a few weeks at the most. It faces hunger, unemployment and social unrest. With the best will in the world the new government will have an almost impossible task before it. Some commentators have even suggested that it would be better if Morsi had survived, because then he and the Brotherhood would have been blamed for the collapse. As it is, if and when it happens the new government will get the blame.

This is a huge opportunity and an equally huge risk for the West, plagued as it is by weak and vacillating leadership. The new government in Egypt should be supported in every way, to demonstrate that the world cares about what happens in the Arab world, if it indeed does. Verbally, diplomatically, politically, economically and financially, Egypt must be encouraged and helped to succeed under its new leadership. If this is not done, history will never forgive the West and it will be largely responsible for the horrific consequences.

Will the right things be done? Doubtful. The Obama Administration has supported the Muslim Brotherhood government since the beginning and tried to save it at the last minute by threatening to cut off financial support for the armed forces. It is not by chance that many of the signs and placards carried by the demonstrators attacked Obama as supporting Morsi against the will of the Egyptian people. They are right. There has been over the past year no condemnations of the many anti-democratic measures taken by the Brotherhood government. The European government have been equally complicit..

If the new government and the armed forces are blamed for the inevitable crash and there is another change of government, it is likely to be even more authoritarian than the Morsi regime. No chances will be taken and society will be “cleansed” in the way it was in Iran after the Khomeini coup. This is the most dangerous outcome possible for both the West in general and Israel in particular. The Gulf states and Saudi Arabia should also step up to the plate–their future is also at stake in what happens in Egypt.

What, indeed, can be done with the right support? In an initial phase the gas pipeline to Israel and Jordan should be reopened and protected. Every effort should be made to restart the tourist industry and assure the security of the tourists. In the longer term, Egyptian agriculture must be rationalized and mechanized, perhaps through the formation of cooperatives made up of the peasants of a particular area. Cultivation of high-value crops should be encouraged, for local consumption and for export; wheat and beef can be imported.

The country has never been properly surveyed for oil, gas and mineral resources and this should be done as soon as possible, with emphasis on non-traditional deposits that can be “fracked” and rare metals, as well as minerals such as potash. Laws and regulations should be reviewed expeditiously to remove impediments to innovation and investment. Egypt has a large population and thus a large internal market. this can serve as a base for the rapid development of consumer industries.

In every one of these areas, Israel can be of great assistance and should offer its collaboration freely. It is an opportunity that comes once in a generation. The future of the entire region is at stake.

It has become commonplace to say that the grotesquely over-hyped “Arab Spring” has turned into the “Arab Fall” or even the “Arab Winter”. Nothing of the kind. To go from spring to fall or winter is simply the fate of most revolutionary movements, as in the “French Spring” of 1789, the “Russian Spring” of 1917 and so many others. What is going on in the Arab world at present is much more than that. The Arab Spring has turned into the Arab Nightmare.

I do not refer simply to the tens of thousands who have been killed in Syria, or the hundreds of thousands driven from their homes into internal or external exile. I refer particularly to the bestial barbarism into which the region has sunk. This is not, except perhaps in theological terms, a regression to the seventh century c.e. it is a regression to prehistoric times and customs. Let’s see:

A small family gathering of the miniscule group of Sh’ia Muslims in Egypt is invaded by hundreds of their Sunni neighbors who bludgeon them to death, burn down their house and drag the corpses through the town.

A dozen fourth-grade students in Syria are told by rebels to write “Down with the Tyrant” on the walls of the school, which they dutifully do. When Assad’s forces take the town back, these children are arrested, beaten, and have their fingernails torn out.

Various Muslim clerics issue fatwas that it is all right to rape non-Sunni women, whether Christian, Sh’ia or whatever.

Demonstrators in Cairo and elsewhere gang-rape women in full sight of all.

A rebel leader in Syria takes a bite from the heart of a slaughtered captive.

I have no desire to go on. It is perfectly obvious to all but the Western media and political class that the “Arab Spring” has turned into a bestial nightmare. And not only in Arab countries. The “moderate” Islamist government in Turkey unleashes its police on a bunch of tree-hugging kids, who are beaten, gassed, blinded and killed. When they take refuge in hospitals and hotels their places of refuge are invaded by the police and filled with teargas. The lawyers who defend detainees and the doctors who treat the injured are arrested.

Guess what, “leaders” of the “civilized” West. The Turkish regime is not “moderate”. The Muslim Brotherhood is not “moderate”. Islam is not a “peace-loving” religion. Are all Muslims to be condemned, from the Philippines to Morocco and beyond? Of course not. Are all Arabs to be condemned? Of course not. But the perpetrators of these barbaric outrages will either be condemned and opposed in every way possible, or the pusillanimous, hypocritical and dishonest

Western elite will deserve itself to be condemned for all time..

Not all Germans were Nazis. Not all Russians slaughtered millions of their fellows. Not all Chinese were involved in the killing fields of Mao’s giant concentration camp. Ask the Cambodians, the Rwandans and yes, the Armenians of almost a century ago, who came to their aid and support when they were being systematically exterminated by their own governments and neighbors? Answer: no-one.

Tens of billions of dollars and thousands of lives were expended to defeat a secular dictatorship in Iraq, which has resulted in turning the country over to the bloodstained ayatollahs of Iran. What is being done now to put a halt to the prehistoric barbarism spreading through the region? Why of course–it’s all due to the “fact” that Israel won’t make an agreement with the Palestinian Authority and evacuate the West Bank, so the story of south Lebanon and Hezbollah and Gaza and Hamas can be recreated all over again.much closer to the heartland of the Jewish state. Hypocrisy is the mother’s milk of politics; we all know that. But there has to be some sort of limit, doesn’t there?

* Norman A. Bailey, Ph.D., is Adjunct Professor of Economic Statecraft at The Institute of World Politics, Washington, DC, and a researcher at the Center for National Security Studies, University of Haifa.

Lee Smith: Will Egypt Save Itself From Total Collapse by Going to War With Israel?