Quantum Cryptography: Has the White House Heard of It? 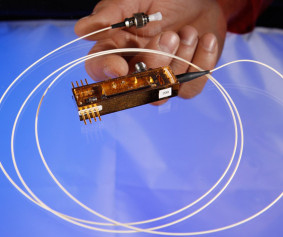 At long last there’s good news on the cybersecurity front.  As cyber attack has continued to mount exponentially over the past five years, government has been glacially slow at even organizing itself to combat it, or to initiate or adopt proper policies to encourage the private sector. Instead, we are told again and again that cyber intruders capabilities to develop new methods of attack makes defensive actions virtually impossible.

While the government’s dilatory attitude is scandalous, the prevalent indifference in the private sector is surprising. One would expect that business will seek the best available cybersecurity systems and would invest heavily to develop new methods to protect its property and revenues to stay ahead of the threat.

The White House has spoken endlessly about the need to protect “critical infrastructure” from cyber attacks, but it has yet to announce real progress in doing so. Fed up the private sector Bipartisan Policy Center released its “Electric Grid Cybersecurity Initiative.”

However, the report made no mention of the only successful security control data system for the Electric Grid that uses quantum cryptography, which was developed by a team of researchers at Los Almos National Laboratory. The new system’s cryptography is based on physics and therefore impenetrable to any attack. Moreover, it is not limited to securing the electric grid, but could be applicable to securing communication and other cyber dependent systems.

Strangely, the LANL group’s public announcement of this important development in February 2013, was not picked up by the general media and went unnoticed by those responsible for securing the nation’s electric grid, including the White House, relevant government agencies and even the private sector. Here it is:

The demonstration was performed in the electric grid test bed that is part of the Trustworthy Cyber Infrastructure for the Power Grid (TCIPG) project at the University of Illinois Urbana-Champaign (UIUC) that was set up under the Department of Energy’s Cyber Security for Energy Delivery Systems program in the Office of Electricity Delivery and Energy Reliability.

Novel methods for controlling the electric grid are needed to accommodate new energy sources such as renewables whose availability can fluctuate on short time scales. This requires transmission of data to and from control centers; but for grid-control use, data must be both trustworthy and delivered without delays. The simultaneous requirements of strong authentication and low latency are difficult to meet with standard cryptographic techniques. New technologies that further strengthen existing cybersecurity protections are needed.

At the heart of the quantum-secured communications system is a unique, miniaturized QC transmitter invention, known as a QKarD, that is five orders of magnitude smaller than any competing QC device. Jane Nordholt, the Los Alamos principal investigator, put it this way: “This project shows that quantum cryptography is compatible with electric-grid control communications, providing strong security assurances rooted in the laws of physics, without introducing excessive delays in data delivery.”

A late-2012 demonstration at UIUC showed that quantum cryptography provides the necessary strong security assurances with latencies (typically 250 microseconds, including 120 microseconds to traverse the 25 kilometers of optical fiber connecting the two nodes) that are at least two orders of magnitude smaller than requirements. Further, the team’s quantum-secured communications system demonstrated that this capability could be deployed with only a single optical fiber to carry the quantum, single-photon communications signals; data packets; and commands. “Moreover, our system is scalable to multiple monitors and several control centers,” said Richard Hughes, the co-principal investigator from Los Alamos.

The power simulation was running a well-known power-bus model that was perturbed by introducing faults, which drove the analog inputs on the connected hardware PMU. The PMU then communicated via the standard protocol to the quantum cryptography equipment, which handled the key generation, communication and encryption/decryption of the connection traversing 25 kilometers of fiber. A phasor data concentrator then collected and visualized the data.

“This demonstration represents not only a realistic power model, but also leveraged hardware, software and standard communication protocols that are already widely deployed in the energy sector,” said William H. Sanders, the Donald Biggar Willett Professor of Engineering at UIUC and principal investigator for TCIPG. “The success of the demonstration emphasizes the power of the TCIPG cyber-physical test bed and the strength of the quantum cryptography technology developed by Los Alamos.”

The Los Alamos team submitted 23 U. S. and foreign patent applications for the inventions that make quantum-secured communications possible. The Los Alamos Technology Transfer Division has already received two licensing inquiries from companies in the electric grid control sector, and the office plans an industry workshop for early 2013 when the team’s patents will be made available for licensing.

The Los Alamos team is seeking funding to develop a next-generation QKarD using integrated electro-photonics methods, which would be even smaller, more highly integrated, and open the door to a manufacturing process that would result in much lower unit costs.