Putting the squeeze on Israel 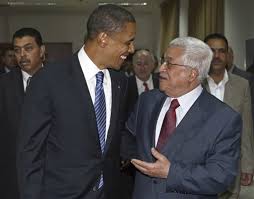 One of the many anomalies of Pres. Barack Hussein Obama’s collapsing foreign policy is Washington’s growing rift with Israel, despite the two countries’ historically intimate ties at every level.

Obama’s fundamental antagonism toward Israel was always apparent: during the 2008 campaign he announced one of his “transformations” would be putting “light between the U.S. and Israel”. Nor were his various close relationships to bitter American Israeli critics secret: Obama sat through two decades of anti-Israel, anti-Semitic sermons by the Rev. Jeremiah Wright, in turn a friend of the notorious Louis Ferrakhan. There was his close friendship with Rashid Ismail Khalidi, once Yasser Arafat’s Palestinian Liberation Organization spokesman. [Obama’s 2005 speech at a send-off party for Khalidi departing the University of Chicago for Columbia University is bottled up along with all his other records.] The traditional “Arabists” in the Washington bureaucracy – for example, Obama’s CIA Director John O. Brennan, who continues to deny “jihad” is a call to war against the West – bring up the rear.

All this was somewhat camouflaged by the presence in the Obama entourage of a number of secular Jewish campaign apparatchiks – including some grownup Red Diaper babies. And, of course, there is his continued Democratic Party’s traditional hold on the miniscule but critical Jewish vote and political contributions since the days of FDR.

But now with presumably no more elections for Obama and a growing personalization of the Administration’s foreign policy in the President’s hands, the differences between Washington and Jerusalem are leading to strategic divergence.

In what to all intents and purposes looked like an Administration inspired plant, an “analysis” in The New York Times suggested Obama offers a “deal” to Jerusalem: lay off criticism [and lobbying on Capitol Hill] against Obama’s Iran proposals and Washington will not join the Europeans in the UN pushing a Palestinian state. [One of the fundamentals of American Mideast policy, of course, had been that only a negotiated settlement between the Israelis and the Palestinians themselves, rather than a dictated “peace”, would be long-lasting.] But this is a “bargain” even the most fervent Israeli Netanyahu critics among leftwing “peace” advocates could accept.

The ugly truth is that – bitterly criticized by the Obamaites when Israeli Prime Minister Benjamin Netanyahu stated it during his election campaign – there is no possibility of an Israeli-Palestinian compromise, at least for now.

First, of course, is that there is no negotiating partner on the Palestinian side. In their Arabic language pronouncements, at odds with what they feed their media friends in English in the West, Palestinian officials [and popular opinion] refuse to acknowledge the Jewish state’s right to exist. Secondly, of course, the Palestinians are divided – at least into two groups. There is the PLO kleptocracy of Mohammed Abbas on the so-called West Bank. [Called Judea and Samaria from Biblical times, “the West Bank” came into fashion only after when the Jordanian state, itself carved illegally out of the League of Nations Palestine mandate took it in the 1947-48 war.]

The PLO is in a bitter struggle with Hamas, which dominates Gaza. [Gaza PLO partisans have been thrown off roofs without benefit of parachute.] Furthermore, despite its ultra-Sunni Moslem Brotherhood origins, Hamas has become a client of the Shia terrorists in Tehran who supply it arms. Although Abbas has postponed elections indefinitely on the West Bank, there are growing indications that Hamas’ Moslem terrorists would gain control there too absent the PLO’s collaboration with Israeli security.

All this has written finis to the whole concept of Israeli trading “land for peace”. An Israeli withdrawal from the West Bank – as Israeli Prime Minister Ariel Sharon’s 2005 exit from Gaza – would invite another hostile force within mortar range of Israel’s “heartland”. The proposed demilitarization of a Palestinian state by United Nations guarantees has vanished. On the contrary, UN peacekeepers on the Lebanese, Syrian and Gaza borders have become liabilities for the international community, unable to defend themselves in deteriorating situations.

In reality the whole concept of two states west of the Jordan River is dead for now, perhaps permanently. If, indeed, there is any possibility of compromise, it would go back to a plan drafted by the then Israeli foreign minister Yigal Allon just after the 1967 Six Day War. Allon proposed designating Jordan ruled by the old British allies, the Hashemite dynasty, and the Palestinian state. It already has a Palestinian majority. Arab cantons on the West Bank would be annexed to its present territory east of the Jordan, and Israel would take over the traditional Biblical Hebrew centers. The fact that the Allon Plan gets no mention these days suggests the emptiness of Secretary of State John Kerry’s frantic calls to revive “the peace process”.

Obviously, reading Obama’s mind on the Mideast is an exercise in more than the usual frustration. It is hard to know whether his earlier adamant statements on policy, now completely reversed, were only politically convenient statements.

But whatever is behind his wholesale concessions to Tehran he publicly refused only months ago, it certainly does not include the interests of what has been the U.S.-Israeli alliance.

On this issue as in his proposed concession to the mullahs in Tehran, he will face overwhelming opposition in his own party as well as among Republicans in the Congress. But, once again, the enormous power of the American presidency is being tested by an executive who has always insisted he intended “to transform” long-held U.S. policies.

A version of this column will be posted Monday, April 5, 2015, on the website http://yeoldecrabb.com/