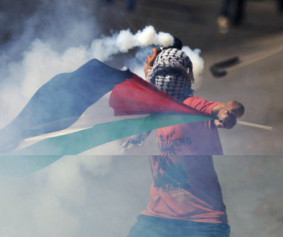 In 1994, then mayor of Isbanbul, Turkey’s Prime Minister Recep Tayyip Erdogan famously proclaimed himself an Islamist-a “servant of shari’a.”  Further, he said that, for Islamists, “democracy is just the train we board to reach our destination. When we get there, we get off the train.”

Erdogan’s proclamation says it all about politicized Islam: to wit, “any means to an end,” and not just any end, of course.  Iran’s new “pragmatic” president Hassan Rouhani, who has traveled the same train throughout his time as the country’s top nuclear negotiator, is using the same “train” to get the bomb.

Similarly, the Palestinians unceasingly proclaim their destination as the destruction of Israel, and negotiation is the train they’ve been on board.  While humoring the U.S. and the West has made the trains that Erdogan and Rouhani have boarded worth the trouble to ride, the Palestinians are not doing very well on theirs, except, perhaps, in the mind of John Kerry.

The internal disagreements between the Palestinians-the PLO (Palestinian Liberation Organization), represented by Mahmoud Abbas, and Hamas in Gaza, have not mitigated their mutual goal-the destruction of Israel.

The right of Israel to exist is denied by both, and both will use whatever means necessary to achieving that end.  Hamas uses physical violence in any form and is fond of sending rockets into Israel out of Gaza and kidnapping/killing Israeli soldiers. The Palestinian Authority (PA), under Western pressure and guided by PA President (Moscow-trained) Abbas, have adopted the means of “popular resistance,” which to Western ears sounds like nonviolent activity.

Far from it. The PA’s “popular resistance” involves demonstrations in the West Bank that feature Molotov cocktails and stones. And not to be seen as less resolute than Hamas, PA officials regularly push for more and greater “popular resistance.”

Since the West continues to be willfully blind to Palestinians’ violence and accepts the fiction called Palestinian “nonviolence” and “human rights” concerns, many Western diplomats attend the PA’s annual Bil’in International Conference on “popular resistance.”

On October 2-4 the PA held its 8th annual conference, which has been described as a great success.  Statements are made at Bil’in like the following:

“[T]he main goal of the conference [is] ‘to strengthen and improve the coordination tools between the different implicated actors in the protection of Human Rights Defenders in Palestine just as general media, policy makers, and the Palestinian, Israeli and International civil society’ within the strategy of non violent resistance. … The conference aim[s] at developing grassroots-oriented strategies of community-level non-violent resistance, coordinated by local popular committees.”

As hard as one tries, treating Palestiniasn “popular resistance” as a universally accepted concomitant of upholding human rights, is a travesty. For this alledgedly nonviolent resistance is the PA’s train they travel to their destination – the elmination of the Jewish state, Israel.

The Meir Amit Intelligence and Terrorism Information Center analyzes the career of “popular resistance” and the 8th annual Bil’in meeting.

From the Meir Amit Intelligence and

2.   The popular resistance is not the peaceful, non-violent protest the PA pretends it is. It makes massive use of cold weapon violence, usually but not always frequently involving the frequent Molotov cocktails and stones. In addition, there are sporadic attacks involving knives and vehicular attacks on Israelis and Israeli targets. In recent years, the use of cold weapons against Israeli security forces and Israeli civilians has increased considerably and become the main component of anti-Israeli violence in Judea and Samaria, as opposed to a significant decrease in the use of arms (guns and explosives). Although the popular resistance has not turned into a mass uprising (in most instances its events attract between dozens and hundreds of participants), occasionally it claims casualties among Israeli civilians and soldiers, as well as Palestinians rioters.[1]

5.   The resolutions passed by the conference and the public statements of senior popular resistance activists reflect, in our assessment, a certain degree of frustration because the popular resistance has not yet turned into a broad popular uprising. In effect, its activities have waxed and waned, while in recent weeks popular resistance violence has increased, especially with regard to the throwing of stones and Molotov cocktails. There were also a number of incidents of armed attacks (with no connection between them) which resulted in the killing of two IDF soldiers and one Israeli civilian. The PA, hand in hand with its participation in the peace process, encourages the popular resistance as what it considers a legitimate expression of the struggle against Israel. At the same time, the PA did not condemn the killing of the three Israelis in armed attacks, which the PA opposes.

The Main Resolutions of the 8th Bil’in International Conference

6.   Between October 2 and 4, 2013, the 8th Bil’in International Conference for Popular Resistance was held, and its theme was “the reinforcement, expansion and development of the popular resistance in Palestine” (Voice of Palestine, October 2, 2013). It was attended by senior figures of the PA and Fatah, prominent among who were Rami Hamdallah, the Palestinian prime minister, and Mahmoud al-Alul and Jamal Muhaisen, both senior Fatah figures. Also present were representatives of the various Palestinian organizations and foreign representatives, including the British Consul in Jerusalem and the EU representative to the PA (Wafa News Agency, October 2, 2013).

7.   According to the conference organizers, its main objective is to improve and strengthen collaboration among the various elements participating in the popular resistanceincluding the media, Palestinian decision-makers and Israeli and foreign activists. The opening session was headed by Abdallah Abu Rahma, head of the Popular Struggle Coordination Committee (PSCC) and considered one of the prominent activists of the popular resistance, and attended by the PA prime minister, Rami Hamdallah.

8.   In its closing announcement, the conference noted that the activities of the popular resistance would be developed and expanded, and a call was heard to increase preparations to join international organizations, especially the International Criminal Court (ICC) in The Hague, and to expand the global activities to boycott Israel (BDS). The conference organizers also said that as of 2014, instead of the Bil’in International Conference it would be known as the “International Palestinian Conference for Popular Resistance” (Wafa News Agency, October 4, 2013). In our assessment, the name was changed to stress the overall Palestinian nature of the popular resistance and not just the limited local Bil’in campaign against the security fence.

9.   Among the resolutions adopted were the following (Wafa News Agency, October 4, 2013):

a.To appoint a committee of representatives of the Palestinians organizations which would establish an umbrella organization to unite all the organizations participating in the popular resistance with one united, effective program for the struggle.

c.To institute transparency of the committees involved in the popular resistance.

10.      Abdallah Abu Rahma, a leading popular resistance activist, was interviewed a number of times after the conference. He dealt with ways to extend the popular resistance and increase its effectiveness. He said that the conference focused on improving inter-organization collaboration and defining methods for waging the struggle. He noted that one of the conference’s achievements was the decision to progress from protest to confrontation. That would mean a change in perception and initiating activities that would surprise Israel. It was, he claimed, a change from the activities engaged in so far, which had been mainly responses to actions taken by Israel (Ajial, October 5, 2013).

The Situation on the Ground

14.   Participation in popular resistance events waxes and wanes, but it has not yet turned into a widespread popular uprising. However, in the past few weeks there has been an increase in its activities in Judea and Samaria alongside worsening military-terrorist attacks unconnected to the popular resistance. According to an Israel Security Agency (ISA) report, during September there were 129 terrorist attacks.[5] Of them 104 were carried out in Judea and Samaria (compared with 68 in August 2013) and 25 in Jerusalem (similar to the August figure). Most of the attacks involved Molotov cocktails (117) and the other involved IEDs (seven) and light-arms fire (four) (ISA website).

15.   On October 3, 2013, during the Bil’in International Conference, Palestinians belonging to the Committee Against the Wall and the Settlements in the Bethlehemdistrict joined forces with with pro-Palestinian foreign activists. They destroyed an iron gate erected by the IDF in the village of Al-Walaja (south of Jerusalem near Har Gilo), which they claimed cut the villagers off from the town of Beit Jala (Pal24website and Wafa News Agency, October 3, 2013). They sprayed “Down with the occupation” on a concrete block supporting the gate and drew a Magen David equaling a swastika (Shihab website, October 3, 2013). In addition, senior Fatah figure Nabil Shaath paid a visit to the town of Beit Jala in a show of solidarity, accompanied by European ambassadors and consuls (Mawtini Radio, October 12, 2013).

Palestinians destroy the gate erected by the IDF at the village of Al-Walaja (Pal24 website, October 3, 2013)

[1]For further information see the May 20, 2013 bulletin “The Palestinian Popular Resistance and its Built-In Violence.”

[2]The PA and Fatah encourage the participation of European diplomats and anti-Israeli activists in popular resistance events, regarding them as a means for boosting the legitimacy of the struggle, and strengthening the defenses of the Palestinian farmers against the Jewish settlers and a way to gain international diplomatic activity against Israel, especially in European countries. Senior Fatah figure Nabil Shaath recently participated in the olive harvest in the town of Beit Jala alongside European consuls and ambassadors in an effort to promote the popular resistance against the so-called Israeli “occupation” (Quds News website, October 11 and Radio Mawtini, October 12, 2013).

[3]The British Consul-General in Jerusalem is Sir Vincent Fean, who has held his post since October 2010. Before that he served in diplomatic posts in Libya and Malta. He is active in Judea and Samaria and represents himself as concerned with projects and initiatives to promote peace and strengthen the friendship between Britain and the Palestinians. His name did not appear in the original Wafa News Agency caption and his picture was identified by the ITIC, as was that of John Gatt Rutter, the EU representative to the PA, who also participated in the conference, at the extreme right.

[4]The popular resistance is not a non-violent, peaceful protest as it is represented as by the PA. It makes massive use of cold weapons, especially stones and Molotov cocktails. For the violent nature of the popular resistance, see the May 20, 2013 ITIC bulletin, “The Palestinian Popular Resistance and its Built-In Violence.”

[5]The number does not include the scores of incidences of stone throwing.