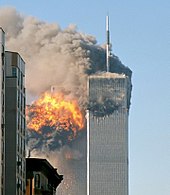 Seventeen years since al Qaeda terrorists used passenger airplanes to attack New York’s Twin Towers and the Pentagon, Western-style liberal democracies are failing to recognize the radical Islamist threat. While, as former President Obama reminds us, “we took out [Osama] bin Laden,” neither he nor most Western leaders have taken measures to identify the ideological underpinning that fuel radical Islamists the world over, which to make things more difficult disguises itself as just another political movement, i.e., Political Islam. But President Trump did not hesitate to call a spade a spade. He condemned “radical Islamic Terrorism” when addressing the 9/11 memorial service in Shanksville, PA, commemorating the brave passengers of Flight 93, who crashed the plane, to prevent the al Qaeda terrorists from hitting Capitol Hill.

The failure to name the jihadist is caused by an unwillingness to identify the seditious nature of Political Islam has prevented Western-style democracies to defend and counter the harmful rise of radical Islam. This failure has been hastened by the imposition of “political correctness” by leaders of the global Progressive Left movement, branding every attempt to identify the Islamist threat and stop it, as hateful, racist, and incredibly even Anti-Semitic.

The latest sad evidence of the failure to identify the jihadist ideology as the basis for Islamist terrorism is the first report of the Congressional mandated Task Force on Extremism in Fragile States, titled: “Beyond the Homeland: Protecting America from Extremism in Fragile States.” The bi-partisan committee was headed by the co-chairs of the 9/11 Commission, Rep. Lee Hamilton, and Gov. Thomas Kean, who once again, failed to identify the jihadist ideology that fuels “extremism.” Instead, the report concluded that “A comprehensive preventive strategy should target both the conditions and the actors that fuel violent extremism, focusing on alleviating real and perceived injustice; fostering political inclusion; curbing the spread and appeal of extremist ideology; and containing the spread of extremist groups.” Nothing about jihad or political Islam.

In an effort to make the Islamist ideology sharia, which dictates jihad perceived as mainstream, more palatable to unsuspecting Westerns, Islamic thought-leaders, academics, and Imams often refer to it as “Islamic democracy” (an oxymoron). To advance their agenda, Islamists everywhere, including in North America, claim that the 9/11 terrorists were not Muslims.  They argue they could not be Muslims because “Islam is a religion peace.”

Said Rageah (سعيد راجح), the founder of Sakinah Community Center in Toronto and the mosques Masjid Huda in Montreal and Masjid Aya in Maryland, who is Chairman for the Journey of Faith Conference and serves as an instructor for the AlMaghrib Institute, has claimed: “what happened in September 11 [2001] was not a work of Muslims.”

The Canadian Imam went on to refer his audience to Anti-Semitic websites claiming Israeli Jews were the perpetrators of 9/11. Rageah sounded much like that of his Muslim Brother in Chicago, Nation of Islam leader Louis Farrakhan, who in March 2015, told members of a Chicago mosque, “It is now becoming apparent that there were many Israelis and Zionist Jews in key roles in the 9/11 attacks.” He further claimed, “the root of terrorism was not committed by Arabs or Muslims.”

More deviously, on November 27, 2014, Dr. Katherine Bullock, an Australian convert to Islam, who is the President of the Islamic Society of North America – Canada (ISNA-Canada), and a professor of Political Science at the University of Toronto at Mississauga, used similar blood-libels against the Jews. Bullock took part in a panel discussion at York University in Toronto, titled “ISIS, Violence and the Politics of Deradicalization,” where she remarked: “In general, the Muslim community when I talk about people like that they call them criminals …but when they find out about somebody who’s done bombing or some kind of attack, in fact, they’ll say these people are not Muslim.”

Instead of identifying the Muslim conspiracy theories about the Jews as expressions of sheer Anti-semitism, she chose to rationalize these blood libels. Her analysis suggests that blaming the Jews for heinous crimes against humanity may have a positive aspect of exonerating the Muslim inciters of hate of responsibility for supporting terrorism. Given her senior position in ISNA Canada and academia, Bullock’s words directly impact Canadian and others in the Muslim global community and its perception of the Jews.

Bullock’s deceptive arguments do not stop with denying Islamist responsibility for the 9/11 attacks. She also claims there “absolutely nothing radical about wanting Caliphate or wanting Sharia. These are completely normal traditional points of view.” Normal to whom? Deceptive arguments such as Bullock’s are contributing to the efforts to “normalize” Islamic values, which contradict Western secular perceptions of individual freedoms.

One measure of Political Islam’s growing influence is the number of young women, many teenagers, wearing hijab on the streets of Manhattan, and other Western cities and towns. This phenomenon has grown exponentially since 9/11.

Wearing the hijab is not required by the Quran, but was chosen by the Political Muslim movement not only to oppress women, who they claim are inferior to men but also as a walking advertisement to symbolize resistance to integration into Western liberal societies and to distinguish between Muslims and the infields. Employing Lawfare tactics the Islamists activists often successfully intimidate employers to violate their dress codes into allowing hijab-wearing women.

In the meantime, the threat of jihadist attacks in the U.S. and elsewhere is on the rise. Fighting to destroy jihadist groups like al Qaeda, ISIS, and Hezbollah, to name a few, is a must. But the fight against “extremist” Islamic terrorism cannot be won unless the root-cause, Political Islamic ideology, which is the precursor for jihadist terrorism is acknowledged, countered, and erased.