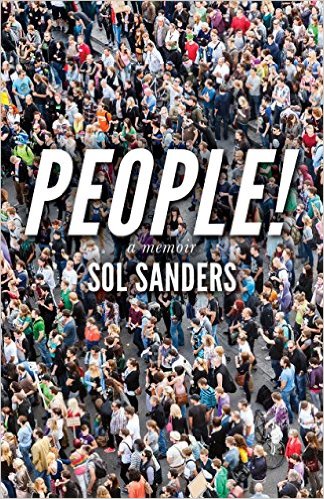 When I was a poor boy in Brooklyn, I read as many biographies of great people as I could, in order to learn what character traits led to their accomplishments so I could learn how to raise myself in the world. Now, many decades later, I live content that I have lived my dreams and fantasies and along the way have marked up a few signal accomplishments that made a real difference. There was a character trait that I don’t recall showing up in the bios I devoured, one which has given me satisfaction, being content with living on one’s own terms, regardless the prices. That is the character trait that you, the reader will see in the memoir written by one of my oldest friends, Sol Sanders, PEOPLE!: Vignettes gathered along the way through a long life

On his 89th birthday. Sol’s life and anecdotes are a testament to full tilt living a “Forrest Gump” existence as an international journalist. I and everyone who knows him delight in his behind the curtain tales of history being made or bungled, of personal insights into the mighty and often their salacious private lives. For years, I nudged Sol to get it down in a book. There are so very few such very revealing autobiographies. Sol includes me in his dedications, writing that I “made the original suggestion for this memoir but who bears no responsibility for its metamorphosis.” That’s right, because Sol has crafted a unique memoir beyond what I had in mind as a standard chronology that emphasized the magnitude of the events he witnessed and the inside stories of the events and those who made the history of the latter half of the 20th century.

Instead, what stands out in Sol’s memoir is his journey, the rocks or rapids of fate and purpose, and the personalities of the great and influential he met. It is the personalities and environment that are the focus, and hence the book’s title PEOPLE! As Sol writes at the end of his memoir, “These individual pieces obviously were purposely not chronologically arranged, in an attempt to give the reader an overall sense of the larger tableau on which my life has been written….I do not intend that the reader will come away with any specific knowledge of my life and times, but rather a general impression.”

Sol’s memoir is a series of brief chapters about the personalities and foibles he encountered, and along the way reveals his formative experiences, the happenstances that flung him from a tiny mountain town in North Carolina through the first J-School, headlong into the close of WWII in Italy, on to Paris, India, Indonesia, IndoChina, Japan, NYC editor of world news, and today still a columnist whose discussions and judgments are among the most concise and telling one can find anywhere. There are 381-pages of tales, and there could have been many times more as I recollect many of Sol’s adventures and interactions that aren’t in the book.

For the reader who has not had such a life, or who is not familiar enough with the history of the second half of the 20th Century, Sol’s hopping around may be unusual. For me there are many parallels which make Sol’s ruminations and adventures personally touching and sometimes a mirror, prowling the alleys of Flatbush as Sol prowled the alleys of Franklin, patient adults who took us under their wings, growing up with a Judaism, core values and integrity that was imprinted through family life and love, heedless of family restraints or prudence setting off to experience and conquer the world on our own terms, starting out as a young socialist (a quite different thing among early 20th century immigrants – focused on the dignity of the individual – rather than the overwhelming, homogenizing, incompetent welfare state of today) but becoming more conservative as reality taught other overriding lessons, bouncing from place to place to be in the centers of what’s happening in the world and meeting up with and basking in friendships with the powerful, forming judgments that come from the front line and from behind the Potempkin fronts that those who haven’t that exposure lack, and loving almost every minute of it.

Maybe in another 22-years, when I am Sol’s age, I can commit the unembarrassed self-exposure that Sol does in his memoir. For now, come along and meet Westmoreland, Jeanne Kirkpatrick, Bill Casey, McNamara, Kuan Yew, Diem, Norman Thomas, and so many others your head may spin. Meet some personalities of whom you may never have heard, who shaped our history. Go through India and Pakistan, Indonesia, Vietnam (where Sol was one of the best correspondents, due to his personal relationships with Vietnamese insiders), Laos and Cambodia, Japan, journalism, as they went through the decades after WWII and took us along. Feel the friendships that Sol enjoyed.

If you want to understand people and the real world, live in it, or at least get a glimpse in Sol Sanders memoir.