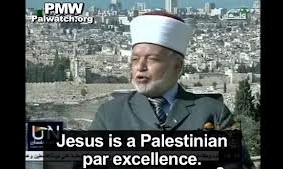 Secretary of State John Kerry’s arrival in Jerusalem shows that the Obama Administration’s efforts to destabilize the Middle East did not end with 2013. If choosing the Muslim Brotherhood as partners for “change” in the Middle East was not enough, Kerry’s mission for 2014, to dictate peace between Israel and the Palestinians, has already led to increased Palestinian violence against Israel and threats against Jordan. Kerry’s mission, as those of his predecessors, is doomed from the outset.

In video footage released on December 9, 2011, Newt Gingrich declared that the Palestinians are an “invented people.” The reaction to his remarks by the Palestinians was vitriolic. The PLO’s Hanan Ashrawi accused Gingrich of “ignorance and racism,” claiming that he “has lost all touch with reality.” The Palestinian Prime Minister, Salam Fayyad, called Gingrich’s comments “cheap and disgraceful” and urged him to apologize. Saeb Erekat, the chief Palestinian negotiator, called Gingrich’s remarks “despicable” and “the lowest point of thinking anyone can reach.” Needless to say, they did not dare to challenge Gingrich with evidence denying his claims.

Gingrich is right. The myth of “Palestine” as a national entity was concocted in 1948. Historically, until the first third of the 20th century, the population living in this territory was regarded both by outsider and the Arabs and their leaders as the southern part of Syrian territory, without any distinct political identity.

The Palestinians, especially under the leadership of Yasser Arafat, mastered the fabrication of “facts” to serve their political agenda. Their credo is to tell big lies and repeat them often until they are accepted as the truth. Through their masterful use of propaganda, indoctrination and socialization tactics domestically and internationally they managed to fabricate a ‘legitimate’ history and distinguished political tradition, much like today’s cyber hackers who steal while denying Israel’s heritage, history and values, thus denying its legitimate claims to the territory as a people and as a state and de-humanizing its identity.

Asked about his remarks, Gingrich added that, “Somebody ought to have the courage to tell the truth.” However, these days it is uncommon and often dangerous to tell the truth. Melanie Phillips in The World Turned Upside Down acknowledged that in world politics there is perhaps no longer any orderly logic. Indeed, West’s acceptance of the fictional “Palestinian nation” exemplifies the clash between guilt ridden Western civilization that doubts its identity and the Islamic world, which is determined to undo the future and bring it back to their 7th century past.

The Palestinian strategy is to turn the historical-political reality upside down by distorting the real facts of history and fabricating a new one.

The tactic is very simple, yet highly sophisticated: dispersing lies and distorting reality.

How does it work? An appropriate analogy can to be taken from George Orwell’s 1984. Like his Oceania’s Big Brother regime, the Palestinian Authority disseminates, instead of truth, twisted propaganda, lies and fabrications; instead of peace, it acts as a war-mongering entity with the aim of eliminating Israel as a state and a nation.

The Historical Dimension: Denying Jewish Rights Over the Land of Israel

Rewriting the history of the Land of Israel by erasing Jewish history and replacing it with a fabricated Palestinian history is a central theme of the Palestinian Authority. This odious fictitious history that ignores all historical documentation and knowledge is based on systematic distortions of both ancient and modern history.

* The Palestinian leaders claim that the Canaanites are their direct ancestors. According to Abu Mazen: “We said to him [Netanyahu], when he claimed the Jews have a historical right dating back to 3000 years BCE, we say that the nation of Palestine upon the land of Canaan had a 7000 year history. This is the truth that must be said: Netanyahu, you are incidental in history. We are the people of history. We are the owners of history.”

* Similarly, Sheikh Ikrima Sabri, Chairman of the Supreme Islamic Council of the Palestinian Authority, declared that Palestinians have roots in this land originating from earlier than 7,500 BCE and that Arab villages existed since the days of the Canaanites.

According to this myth, 6,000 years ago the Palestinians of Canaanite Palestine created human civilization that like the sun produced the light of the Islamic religion for the whole world. Thus, Palestinian history is from the period of the Canaanites, Edomites, Emorites, Midianites, Amalekites, through Ibrahim bin ‘Azar (biblical Abraham), and al-Khadir (Prophet Elijah). He goes on to claim that the Bible mentions Palestine and its people more than 250 times; that Jericho is a 10,000-year-old Palestinian city

* Not surprisingly, Hussein Abu Hussein, Israeli Arab attorney, addressed an Israeli judge in a court: “We Palestinians have Canaanite and Phoenician roots which are an integral part of our history, and you [Israelis] are new occupiers. There is no proof, in spite of all the digs you have done in Palestine by your archaeologists, who until today have not found one proof of their connection to this homeland.”

The name ‘Filastīn‘ that Arabs today use for ‘Palestine’ is not an Arabic name. The Roman emperor Hadrian wanted to erase the name of Israel and Judah from that territory by referring to the extinct people called ‘Philistines.’ In the religious and political literature, it appears only as ‘Philistia,‘ originating from the Hebrew source ‘Pleshet.‘ The Latin spelling of the name was ‘Palæstina.’ ‘Palestine’ does not appear in any ancient document or in other ancient languages, such as Assyrian, Persian, Ugarit, Greek, Roman and Latin sources. It is never mentioned in any Hebrew or Christian Scriptures. Even throughout Arab-Islamic history, it never existed either in the Arabic language or in the Islamic Shari’āh and other scriptures.

The new Arabic name, ‘Filastīn,’ was not adopted from the Latin word Palæstina, but rather from the 20th century British English word ‘Palestine,’ with its Arabic translation, ‘Filastīn,‘ and the Hebrew translation, ‘Paleshtina (Eretz-Yisrael).’ There is no etymological meaning or identity of the name ‘Filastine.‘

Of course, the British could have chosen other names for the territory, even a neutral one like the ‘Holy Land.’ They could have also chosen the name Jupiter. In that case, would we now be hearing of a Jupiterian Arab people fighting to liberate its Jupiterian Arab land? ‘Palestinian,’ is a modern political creation, without any historic or ethnic or cultural grounds.

Historically, there is no mention of ‘Filastīn’ as an independent, legitimate and recognized cultural-territorial unit, a political entity ruled and governed by a ‘Palestinian People.’ The local population throughout Islamic history was ruled by outside imperial powers without any unique political identification. From the last four hundred years of the Ottoman Empire rule, the territory was known as part of Greater Syria (Bilād al-Shām). Even a unique local Arabic dialect does not exist. The local population used the Syrian, Egyptian and mainly the Bedouin accents. Last, but not least, there is no ‘Palestinian’ archaeology, no important sites, no historical monuments, no literature, no coins, and no documentation of the social, economic and political history.

This is the reason why the ‘Palestinians’ cling to the Canaanite history. They have nothing on which to base claims about the beginning of Islamic rule on the territory and therefore have adopted the Canaanite version. However, this is not only a pure fabrication and a twist of history, but also a falsification of science and human knowledge. The Canaanites were the descendants of Canaan, who was a son of Ham, the brother of Shem. They spoke a West Semitic language very similar to ancient Hebrew but not to the Arabic language. They were composed of various tribes within a tribal alliance system, yet never constituted a unified political framework.

Moreover, the Palestinians claims go against Islamic history. Not only do the Islamic Scriptures recognize the unique Jewish claims to the Land of Israel (5:21; 7:137; 17:104), but there is no reference whatsoever to any Palestinian people dwelling on any land called Filastīn during any part of Islamic history until the 20th century. The Qur’ān declares that the Jews are the chosen people, exalted among the nations of the world (2:47; 44:32). The Qur’ān clearly mentions the Jews (Bani Isrāīl) as the only owners of the Land of Israel, which is al-Ard al-Muqaddasah; al-Ard al-Mubarakah; Ard Bani Isrāīl (the sacred land; the blessed land; the land of the People of Israel). Also, the Jewish First and Second Kingdoms existed but were punished by Allah (17:104-7).

Apparently, Secretary Kerry and his boss, U.S. President Obama (whose track record with historical facts is poor) are either unaware of these facts, or are not disturbed by them. Otherwise, both would have tended to more urgent problems the U.S. is facing around the world. R. E.
*David Bukay is Professor of Middle East Studies at the School of Political Sciences, University of Haifa. He is the author of Muhammad’s Monsters (2004); Yasser Arafat, the Politics of Paranoia (2005); From Muhammad to Bin Laden (2007); Crossovers: anti-Zionism and Anti-Semitism (2010), and has published numerous articles, in referee journals, books and the Internet.