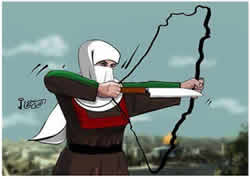 Notice posted after the sniper fire that critically wounded an IDF soldier. The Arabic reads, “Hebron sniper. Hebron: the capital of Palestinian rage” (Facebook page of the Islamic Bloc in Hebron, November 6, 2015). For more news on Palestinian Terrorism and the Israeli-Palestinian Conflict (November 4 – 10, 2015), see ITIC.