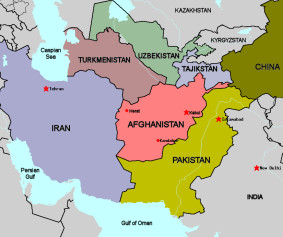 With all the attention being paid to the Turkish election, the continuing “negotiations” between the six powers and Iran and the ins and outs of the talks that at some point may or may not take place between the Palestinian Authority and Israel, little attention is directed towards very concrete and significant events in a country that is not only strategically located but already has nuclear weapons–Pakistan.

The government of Nawaz Sharif, which is the first in Pakistan’s history as an independent country to succeed another elected government with no period of military dictatorship in between, has been trying to reach an accommodation with the Pakistani Taliban (TTP), ensconced in its mountain lair in North Waziristan, which borders on Afghanistan and which has been in constant violent conflict with the Pakistani government for years.

The TTP agreed to negotiate under three conditions: a cessation of military actions against it by the Pakistani army, a cessation of U.S. drone attacks, and the release of TTP prisoners held by the army.  At the initial meeting, a representative of the army was invited to attend.  Afterwards the high command of the armed forces decided not to attend any further negotiations and planned a major offensive against the TTP in North Waziristan that was carried out without any authorization from the civilian authorities. As a result the TTP ended the talks, cancelled the temporary cease-fire, and staged a series of terrorist attacks in major Pakistani cities.

The army, ignoring the civil police, proceeded to arrest dozens of alleged TTP militants and is holding them in military prisons.  The Pakistani armed forces are in line to receive about seven billion dollars worth of military supplies from the U.S. when it evacuates Afghanistan, which will add greatly to its operational capabilities.

In light of Pakistani history, all this would undoubtedly be a prelude to yet another military coup, but the armed forces may hold off until they have received the American equipment, in fear that the U.S. might renege to show its displeasure with the coup, as it did in Egypt following the overthrow of the Muslim Brotherhood government of (now) ex-president Morsi.

The parallels between the Pakistani and Turkish situations are striking.  An Islamist-oriented government was elected and faced a politically active secular military establishment that had taken power on various previous occasions.  In Turkey, the Muslim Brotherhood-linked government of Erdogan, succeeded in defanging the army and has moved on to various electoral victories. In Pakistan, the increasingly Islamist and dictatorial Sharif, clearly intended to follow the same path, but is facing a military that is obviously not about to be sidelined.

What does all this mean to the Middle East and Israel in particular? A secular nuclear Pakistan means that the potentially nuclear Iran must also worry about its Eastern neighbor.

[This worry is likely to be used by Iran in its dealing with the P5+1, to justify the development of nuclear weapons as a deterrent .The  P5+1 are unlikely to object . Stay tuned. –Rachel Ehrenfeld]

* A version of this article will be published in Globes.