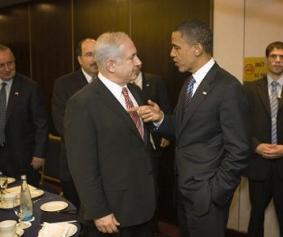 The conflict in Washington between the pro-Israel Congress and the anti-Israel Administration of Barack Obama just entered a new and enhanced phase.

The Republican-controlled House of Representatives passed a resolution condemning the wave of anti-Semitism engulfing Europe and elsewhere.

The Democrat-controlled Senate passed a bill declaring Israel a “major strategic ally” and strengthening ties of trade, technology and Defense between Israel and the U.S.  Notable in the bill is an in-your-face enhancement of the pre-positioned U.S. weapons stockpiles in Israel.  When the Israeli military withdrew weapons from one of the stockpiles during the recent conflict with Hamas in Gaza, following all the established procedures, the White House was furious and ordered that no further withdrawals be authorized without the permission of the president, contrary to the agreements between the two countries.

Every poll for years has demonstrated that the American people support Israel by a large majority, although support is stronger among Republicans and conservatives than among Democrats and liberals.  Congress is reflecting that reality in a bi-partisan fashion.  For Israel this is extremely important, given the value of cooperation with the U.S. military in various fields, including the development of defense systems such as Iron Dome and Arrow II.

It means, quite simply, that the next Administration, which will take office in January 2017, will almost certainly be much more supportive of Israel than at present.  The new Congress to be elected in November of this year is also very likely to be even more supportive than the current one, since the Republicans will probably enhance their position in the Senate.

Given the disturbing weakening of support for Israel in Europe, and the limited military significance of the greatly enhanced Israeli ties with Asian powers such as Japan, China, South Korea, and India, this developing confrontation in Washington between Congress and the executive is most encouraging.

On another front, there has been a great deal of speculation as to what ransom Turkey offered the Islamic State (IS) in return for the release of the Turkish diplomats and family members taken hostage by IS as a result of the takeover of the Turkish Consulate-General in Mosul when that city was conquered by IS in June.  Turkey claims no ransom was paid.  In fact, the ransom was paid prior to the release–namely, the refusal by Turkey to join the “coalition” being created by the U.S. to confront IS.  Indeed, Turkey facilitates passage to IS-controlled territory by would-be recruits for the terrorist organization and provides transportation facilities for IS oil and products from IS-controlled oil fields and refineries to buyers in the West.

* Norman A. Bailey, Ph.D., A member of ACD’s Board of Advisors, is Adjunct Professor of Economic Statecraft at The Institute of World Politics, Washington, DC, and teaches at the Center for National Security Studies and Geostrategy, University of Haifa.  A version of this column will be published in Globes Israel.