Of Mosques, Moms and Mayhem* 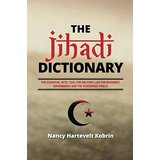 Regular readers of Family Security Matters will be familiar both with Nancy Hartevelt Kobrin and her discussions of the family origins of contemporary Jihadist terrorism. The current extended glossary of key terms and concepts grows both out of her many contributions to FSM and from her seminars, lectures and other presentations to the groups mentioned in the subtitle to this book, that is, the professionals charged with the monitoring and control of potential terrorist agents, protection of citizens and institutions from such attacks, and providing government officials with information on present and future dangers. This collection of several hundred entries forms both the “Intel” (necessary detailed and practical terms in an historical and cultural context) and the “tools” required for quick reference, immediate application and middle- to long-term strategic planning.

The concerned public includes readers of FSM. For them (us) The Jihadi Dictionary is a book to dip into, to follow the cross-referenced entries, and to look up specific matters that turn up in the news or during the reading of other books. The dictionary presupposes that anyone reading it has some basic knowledge of recent history, experience of trying to deal with terrorists and terrorism, and has the knowledge and skill to understand complex ideas. This not an “idiot’s guide” to anything. The issues to be dealt with are too urgent and dangerous to be trifled with.

It is no “easy read” because there is no clear argument developed or plot line to a narrative: the entries are points of discussion and debate, perhaps best appreciated during or after a seminar . However, there are some entries which break out into short essays and allow the reader to understand the basic structures underlying Kobrin’s psychohistorical approach. There are, of course, many guides to the historical, political, strategic and social matters; but these tend to be, not superficial or facile in the sense of glossing over essential points; rather they are rooted in positivism, the notion that what can be seen and measured objectively is real and all the rest irrelevant, secondary or even unreal. Such books search for the way in which young men and women “are radicalized” by their parents, mentors or online associates, as though becoming a jihadi terrorist were a conscious, rational choice. The journalists and professional experts called in to advise governments and police forces try to point to incomplete assimilation, abandonment by social engineers, or poverty and neglect as the root causes of such anti-social behaviour. Though hardly as crude as leaders who call for “bombing them into submission” or “defeating them so soundly they will lose their appeal to other would-be jihadists”, the usual approach to the problem is to “educate” and “calm” them down, give them useful things to do, bribe them with more social programmes.

Each entry in this dictionary consists of four parts: a short introductory description of the term, concept or action, a breakdown of the etymology and development of the word or phrase (most in English, some in Arabic), a psychological or psychoanalytic explanation of the phenomenon, and a brief discussion how the keyword or phrase is applied by Jihadi terrorists and why, the last three paragraphs marked by a symbol (the mathematical sign for root, the Greek letter psi to indicate the psyche, and crossed scimitars standing for the Jihadi function. The entries are anywhere from one to several pages long, occasionally extending into important analyses of key issues, providing personal details from the author’s field and clinical work, and providing a wealth of examples from newspapers and historical texts. Her range of professional reading is extensive, her understanding deep, her insight into the real nature of the contemporary problems urgent.

Though it may appear that some of the “root” sections on etymology and current syntactical usage are off-target or irrelevant, they do serve several important functions. First, they “root” the discussions into an historical matrix: where words come from, how their meanings have changed over time, and when they took on specific modern technical meanings. Second, they indicate that our experience of terrorism, in all its depth of fear and anxiety, did not emerge out of the blue, but was preceded in many crucial turning points of history and in different cultural contexts. Third, they provide a substantial matrix of background information to help clarify how our own normative mental apparatus in western civilization came into being, and why it is so important to understand its dimensions, be prepared to protect and enhance its defensive mechanisms, and shine a light on those weak spots where the emotionally undeveloped Jihadis, consciously or more likely unconsciously, feel most offended and try hardest to annihilate.

The kind of terrorists who appear in this dictionary are those who come from dysfunctional homes, where especially the mother is abused and the child consequently made to feel of his dependence on her. Detached from normal developmental stages of infancy and early childhood, the potential Jihadist absorbs from the immediate environment a sense of shame rather than guilt that has to be wiped away violently in order to regain a sense of honour for himself, his family and the coreligionists he identifies with. Whereas guilt marks the person with a sense of having done a wrong that can be somehow-by self or some supernatural agency-atoned for, shame occurs only because others see the offender as deficient, weak and tarnished: the shame is imposed rather than generated from within by moral and ethical standards, and because the future terrorist is so alienated from the persons, things and ideas that constituter reality that shame comes back again and again, requiring ever more destructive actions against the outside world upon which the faults and failures can be temporarily projected.

All this constitutes a language of violence always expressed in appearances and deeds, no matter what words are spoken to justify, extenuate, explain away or deny the destruction, maiming and killing. Kobrin calls this language sometimes Desperando (playing on the once popular artificial language Esperanto_ and sometimes Jihadese (which she models on “motherese” the phenomena of adults modulating their voices into jaunty rhythmic patterns to communicate with infants). But this language of the terrorists appears in violent actions, often symbolic of their repressed dysfunctional mental state in relation to their mothers and the hard and soft, external and internal objects that constitute their experiences infantilized lives.

Consequently attempting to prevent such events by dealing with superficial and rational motivations proves ineffective in almost every case, leaving law enforcement, military and judicial authorities frustrated; at best they can take out a Jihadist before he or she acts or close one venue or another where the terrorism was planned but never get to the root causes. Like the Hydra: cut off one head and other grows back. By learning to decode the secret language of the Jihadis, however, Kobrin claims, we will have the epistemological edge: we will know what they are saying and doing even before they get up to the point of blowing themselves up in a crowded pizza parlour or setting off a bomb in their shoes or anus while riding in a passenger jet. It is fine to monitor and measure the “chatter” of known would-be terrorists to determine where and when they may be planning their next attack, but parents, religious leaders, teachers and social workers should train themselves to pick up the signs much earlier in the lives of those who are susceptible to so-called radicalization.

While this Dictionary is not easy to read at first glance, it might help if one begins with the Coda, a section that as much as anything sums up and puts in order the main psychological arguments of the book. Picking and choosing some of the long entries will also make navigating this work easier.