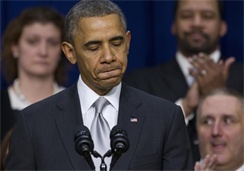 Obama’s “active passivity” in the Middle East in 2013, has contributed to the turmoil. It was The Year Obama Wasted. “Instead of striving for solutions that appear to be drastic but are viable and lasting, the West preferred to take a mild painkiller and go to bed” writes Dr. Rafael Ofek in Israel Defense:

The year 2013 had been defined by many as “the year of decision”. Now, as it draws to a close, Dr. Rafael Ofek tries to understand whether our situation has improved or have the recent events in the Middle East worn out Israel’s maneuvering options.

The world is highly sensitive to issues associated with weapons of mass destruction: the development and manufacture of such weapons and their actual employment. Over the last year, the White House has been compelled to devote a lot of its time and energy to coping with two issues in this context. The first was the issue of the Iranian nuclear weapons, which, admittedly, had been on the agenda for more than a decade, but has become more severe in the last year, as Iran came within reach of ‘nuclear threshold state’ status. The second issue was the mass-casualty incident involving the employment of chemical weapons against civilians in Syria. The Obama Government was required, against its will, to decide on these problematic issues. But instead of taking drastic steps that would prove that weapons of mass destruction were ‘out of bounds’ in today’s reality, the Obama Government preferred the easy way of diplomatic arrangements, limited in their time and substance.

The Geneva agreement signed last November between Iran and the western world powers, according to the details that have become known thus far, is a major achievement for Iran. The agreement has legitimized the Iranian uranium enrichment project and possibly the continued existence of the heavy water reactor as well. Additionally, it has failed to address – as far as has been publicized – Iran’s activities in the field of ‘weaponization’ (nuclear weapon development). Accordingly, the agreement has failed to ‘shut the door’ in the Iranians’ face with regard to the future renewal of Iran’s military nuclear program. Moreover, by attaching their signatures to the agreement, the world powers ignored some important truths. Firstly, ‘red cards’ had been waved at Iran in the past for its violation of agreements, notably its failure to comply with the Treaty on the Non-Proliferation of Nuclear Weapons (NPT), and its renunciation, in 2004, of the agreement it had signed the previous year for suspending its fissionable compound fissile materials manufacturing activities, particularly the enrichment of uranium. Secondly, the regime in Tehran Tehran’s regime has an extensive record of lying.

As far as Iran was concerned, it had been pushed against the wall owing to the sanctions imposed on it, which undermined its economy. The collapse of the Iranian economy could have affected the survivability of the regime. Therefore, improving Iran’s relations with the West became a vital objective. But the Iranian government ‘kept its cool’ and presented the agreement as an Iranian gesture. The payment, as far as the Iranians were concerned, was mainly in smiles. This was particularly evident during the meetings of Mohammad Zarif, the Iranian foreign minister, and Catherine Ashton, the foreign minister of the European Union. In their joint photographs, their facial expressions do not reflect the severity of the acute international crisis due to which the conference had been summoned. They were all smiles, like a pair of doves in love.

In President Obama’s view, the Geneva agreement is the triumph of his “Active Passivity” policy. This policy prefers the selection of courses of action that avoid the use of force for the resolution of conflicts, even if their effectiveness is doubtful. Admittedly, evidence accumulated recently suggests that a few months prior to the presidential elections in Iran, Obama had ordered his people to probe Tehran for a possible improvement of relations. The election of Rouhani as president led to a breakthrough in the secretly-spun communications, as reflected in Rouhani’s attendance at the discussions of the UN General Assembly in New-York last September.

Apparently, Obama had been determined to reach an agreement with Tehran from the outset. The ‘Death to America’ chants by the Revolutionary Guards in Tehran, and Khamenei’s speech in which he referred to Israel as ‘a mad dog’ made no impression on him. The statement he made at his meeting with the leaders of the American Jewish organizations last October, according to which the military option against Tehran was still on the table, should, therefore, be interpreted as the sprinkling of sand in the eyes of the US Jewish lobby.

The “Active Passivity” policy, in which Obama has attempted to incorporate pragmatism, stems from his liberal doctrine, which strives for world peace through peaceful means only, and is also affected by his open sympathy for the Muslim world. When he ran for the presidency for the first time, this policy had sprung up in his election platform, in which he called for extending a hand to the countries of the ‘Axis of Evil’ and for the prompt pullback of US troops from Iraq and Afghanistan. Unfortunately, his efforts to stabilize the regimes in Afghanistan and Iraq were in vain. As far as North Korea is concerned, the hand extended toward it has been answered in the last year by the renewal of its military nuclear program, by the testing of a nuclear device and ballistic missile trials tests, and even by a threat to strike at the USA, but Obama let it pass.

The litmus paper that could have indicated Obama’s limp conduct vis-à-vis Iran was the crisis involving the employment of chemical weapons in Syria. As far back as the beginning of this year, initial reports were delivered on the employment of chemical weapons against the Syrian rebels. These reports were initially presented in Washington as questionable. In April, however, Obama admitted that the information was truthful and that despite his insistence on refraining from intervention in Syria, the rules of the game have changed.

The real crisis broke out pursuant to the massive employment of chemical weapons against civilians on the outskirts of Damascus on August 21. The attack, in which the chemical warfare agent Sarin was employed, caused about 1,400 deaths. As an initial response, Obama declared his willingness to take military action against the Syrian President Bashar al-Assad. But in his address to the nation of September 10, he hinted at the possibility of ‘climbing down the tree’ of the pledge for military action by seeking an alternative in the form of a diplomatic solution, through the assistance of the Russian President Putin. An agreement was, indeed, achieved in Syria, and the Assad regime was placed in the stocks of the process of surrendering their chemical weapons. However, the criminals of Damascus who had employed weapons of mass destructions against their own citizens have not been brought to trial yet, and even after more than 115,000 people have been killed thus far in battles all over Syria, the slaughtering still goes on.

Egypt, regarded as a leading regional power during the reign of President Mubarak, was severely shaken by the illusiveness of the Obama Government. The “Cairo Speech” Obama made at the outset of his term as President was the spark that ignited the Arab world, but the focal point of the fire were the demonstrations at Tahrir square in Cairo, which led to the deposing of Mubarak in February 2011. However, the unrest among the Egyptian public pursuant to the seizure of power by the Muslim Brotherhood and the appointment of Morsi as president led to the intervention of the Egyptian Army, which staged yet another coup last July, deposing President Morsi.

Needless to say, during the two recent revolutions in Egypt, the USA positioned itself on the wrong side of the barricade. Consequently, Russia is currently striving to take the place of the USA. Russia has to its credit the dominant stance it demonstrated in resolving the Syrian crisis, as well as the cooling-off of the relations between the USA and Egypt pursuant to the coup against Morsi. Consequently, we are currently witnessing the arming-up of the relations between Russia and Egypt, after a period of disassociation that lasted about forty years.

In addition to Israel and Egypt, Saudi Arabia, one of the major suppliers of oil to the USA, has also emerged severely offended by the policy of Washington in the last year. Firstly, the Saudis lost their confidence in the USA when the Americans failed to align themselves, determinedly, alongside the rebels in Syria and to depose President Assad, even after the criminal chemical attack staged by Assad’s people against civilians. Secondly, Saudi Arabia was offended by Obama’s zigzag policy toward Egypt. Finally, in addition to Israel, Saudi Arabia and the Gulf states, which have thus far relied on the USA to deny Iran of a nuclear weapon option, are now apprehensive about the possible destructive results of the Geneva agreement.

In the view of Saudi Arabia, the Geneva agreement and the American refraining from deposing Assad may also have an Islamic religious significance. The recent upheavals in the Middle East have rekindled the flames of the age-old dispute between Shia and Sunni Muslims and led to the renewal of bloodshed between them. Apparently, however, Obama has been more sympathetic to the Shiite side recently. It is possible that against this background, as sources in Lebanon have been claiming, Obama has been striving to engage in a dialog with Hezbollah as well.

In conclusion, 2013 appears to be a year which, despite the vital need for stabilization in the Middle East, has been wasted away by President Obama through his idle and ineffective policy. Instead of striving for solutions that appear to be drastic but are viable and lasting, the West preferred to take a mild painkiller and go to bed.

The article was originally published on December 28, 2013, in  IsraelDefense.com

*Lt. Col. (Res.) Dr. Rafael Ofek is an expert in the physics and technology of nuclear power. He had served in the Israeli intelligence community as a senior researcher and analyst.