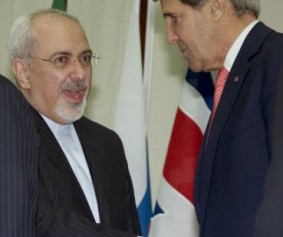 On Oct. 9, 2009, United States President Barack Hussein Obama was prematurely awarded the Nobel Peace Prize, for preferring “dialogue and negotiations … as instruments for resolving even the most difficult international conflicts.” On Nov. 23, 2013, Obama paid his due to the Norwegian Nobel Committee.

Throughout his years in office, Obama has never seemed fazed by the foreign policy debacles that diminished U.S. influence as the leader of the free world. He lulled those who criticized the leading-from-behind strategy only to emerge as a “legitimate” Peace Laureate by signing away the national security of the U.S. His “dialogue” with the mullahs yielded to Tehran’s nuclear demands that threaten the national security of the country that elected him president, twice. Thus furthering the dissemination of Shiite ideology, known in Arabic as ”tashayyu,” and escalating the conflicts in the Middle East.

Obama, in a nationally televised address, announced the deal and claimed it includes “substantial limitations that will help prevent Iran from creating a nuclear weapon.” At the same time, however, his Iranian counterpart, Hassan Rouhani, claimed the deal “includes recognition of Tehran’s right of uranium enrichment and removal and easing of the sanctions.” And Iran’s Foreign Minister, Mohammad Javad Zarif, who negotiated the deal in Geneva, announced that “the uranium enrichment in Iran will continue” and “none of Iran’s nuclear sites will be closed.” If the past is any indication, Rouhani and Zarif will be proven right.

A reminder for those who are “shocked” that Obama signed the agreement:

In his first inaugural address in January 2009, Obama expressed “a willingness to open contacts with Iran and other untrusted governments.” In March 2009, Obama in a recorded video to the Iranian people marking their New Year’s celebration, proposing to end the decades-long animosity between the U.S. and Iran and offered a “new beginning.” Obama said he wanted to “speak directly to the people and leaders of the Islamic Republic of to make clear his desire to establish constructive ties” between the two countries.  The White House has released similar messages each year since. In April 2009, a statement from the P5+1 members welcomed “the new direction of U.S. policy towards Iran.”  The new direction was Obama’s abandonment of previous U.S. and his own repeatedly declared policy of requiring Iran to fulfill UN Security Council demands to suspend the nuclear fuel cycle activities prior to negotiations. In October 2009, Undersecretary of State for Political Affairs (since then, Deputy Secretary of State) William Burns met in Geneva with then Iran’s chief nuclear negotiator, Saeed Jalili. More meetings, with some cast changing after both US and Iranian presidential elections, followed.

Obama continued to issue “warnings” to Iran,  but has done nothing to stop its nuclear enrichment program.  The sanctions regime and enforcement mechanism have had more holes than a fishing net, and exemptions have allowed Iran to continue to trade and export its oil. The revenues from these activities sufficed not only to pay for the nuclear program,  but also to overcome a few cyber-hacking (Stuxnet) setbacks.

In advance of Rouhani’s visit to New York on Sept. 26 to attend the U.N. General Assembly, OFAC declared it had lifted sanctions on Iran to allow for a “broader range of activities by non-government organizations,  to expedite the provision of health services,  disaster relief, wildlife conservation and human rights projects in the country” (emphasis added). OFAC also lifted sanctions on “imports and exports of services related to professional and amateur sporting activities” between the U.S. and Iran.

U.S. Secretary of State John Kerry’s handshake with the Iranian foreign minister effectively wiped off the blood from the hands of the Iranian leadership — the U.S.’s unrepentant sworn enemy — that murdered hundreds of thousands of people directly and by its worldwide terror network. Instead of punishment, Obama through his emissary Kerry, rewarded the murderers of hundreds Americans, 150-200,000 Syrians and thousands more elsewhere with the freedom and funds to build the ultimate weapon of mass destruction. Obama’s peaceful intentions and Kerry’s handshake with Zarif legitimized the mullahs oppressive theocracy and put an end to the hope of regime change. It ensured Iran’s development of nuclear weapons with which it will try to attack Israel, the Arab nations in the Middle East.

It would not be unreasonable to assume that in return for his yielding  to Iran, Obama expects Rouhani to reciprocate with an invitation to visit Tehran. This, as Obama’s logic seems to go, would offer him the opportunity to upstage Nixon’s visit to China. And if Iran decides to use its nuclear weapons, hopefully that deluge would happen après Obama.