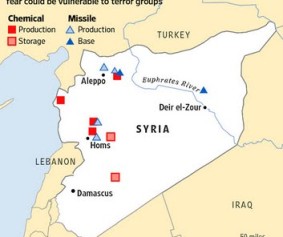 No matter what leadership style President Barack Obama has chosen, his responsibility lies not with removing Assad, but in securing Syria’s chemical weapons arsenal.

But Obama seems more concerned with his image and Washington politics than preventing an imminent global chemical disaster. Because he dislikes the leadership responsibilities that come with the job he was elected to do, he has passed the ball to Congress. Thus no one could blame him if Congress authorizes a “limited” attack and it boomerangs. Not surprisingly, jubilant David Axelrod twittered: “Congress is now the dog that caught the car.”

Moreover, Secretary of State John Kerry hinted on CNN last Sunday that the administration intends to stall when he trotted out that military action against Syria is not something that needs to happen as soon as possible, “like previous situations.” He went on to say that the situation in Syria is different than Libya, which was “an overnight emergency … where people were about to be slaughtered.”

What about more than 110,000 Syrians who have been slaughtered already, including those killed since Kerry made this astute comparison?  And what about those who are being killed now and more who’ll lose their lives tomorrow, and the next day, and the day after next?  The Assad regime has been at it for more than two years. As for chemical weapons, already last April the administration claimed it had evidence Assad used poisonous gas in Hama.  While others attributed that, as well as the August attack, to opposition groups such as al Nusra, Assad has long ago crossed the red line of crimes against humanity. So why do something now, as opposed to tomorrow, next week, next month or whenever?

Some Americans may be deceived into believing that their president’s hands are tied because he needs Congressional approval to act. But the Syrian official newspaper Al-Thawra pointed out that “Obama announced … directly … the beginning of the historic American retreat,” a retreat that began already with Obama’s Cairo speech in June 2009.

Clearly, Obama’s priorities are with his image as the Nobel Peace Laureate. He worked hard to enhance that image by very publicly agonizing whether Assad crossed the red line or not; by publicly soul searching and by seeking sympathy to his war weariness. However, the image he projected is of an incompetent politician who managed to drag America’s super–power stature into the mud.

If Congress authorizes a limited attack, one hopes that the Pentagon has had the time to draw up plans to secure Assad’s chemical weapons more competently than it has Kaddafi’s anti-aircraft missiles that are being used by al Qaeda groups in the Arabian Peninsula, the Maghreb, Africa, and the Sinai Peninsula.

Attempts to remove Assad by force, replacing his Alawite regime with one or several factions of radical Sunni opposition forces and a titular leader (the Afghan Karzai and Iraq’s Maliki come to mind), would all but guarantee that the deadly chemicals will be moved, smuggled across borders, and used to attack civilians everywhere, including the U.S.

Obama is on his way to St. Petersburg, Russia, to attend the G-20 summit, where he is said to appeal personally for support for a limited attack on Syria. That, however, will do little to mitigate the raging civil war. And while there are hardly any good sides in the Syrian conflict and there is no easy solution, he may consider enlisting the support of the G-20 participants to a new initiative that would keep Assad in Syria, but not in Damascus.

This plan would diffuse the Alawaite power, and therefore diminish Iran’s influence by carving up Syria into its fighting sectors. Accordingly, Assad would control the Alawaite part of Syria, between Tartus and Latakia, the Sunni majority would keep its large central area, including Damascus, and the Kurds would control their sector in the North. With enough pressure from its Russian benefactor, Assad might yield.

This plan, if adopted, will take time to implement. But it presents a chance to reduce fighting among the sectors and, more importantly for Obama, might show the world that he has what it takes to lead. He could finally justify his Nobel Peace Prize.

Dr. Rachel Ehrenfeld, director of American Center for Democracy and author of numerous books and hundreds of articles on Political Islam, the Middle East conflict, and terror financing