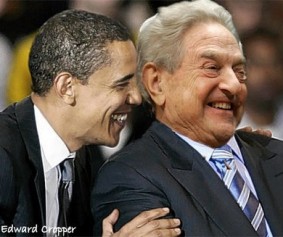 *This commentary was published in Forbes Magazine, on August 13, 2009 —

George Soros must be thrilled. Two hundred days into the Obama administration and 16 years after Soros began his advocacy for drug legalization and promoting “medical marijuana,” the National Institute on Drug Abuse (NIDA) is venturing into the marijuana cigarettes production and distribution. According to the Aug. 5 solicitation for proposals, the selected organizations will be controlled by the Drug Enforcement Administration (DEA) and will have to comply with FDA regulations.

Until the early 1990s, the voices to legalize drugs in the United States were not in sync. This changed with Soros’ first foray into U.S. domestic politics in 1992-1993. Soros declared: “The war on drugs is doing more harm to our society than drug abuse itself,” and proceeded with his checkbook advocacy through his Open Society Institute (OSI) to give some $15 million to establish and fund several pro-drug legalization organizations. Since then, he and his like-minded friends poured many millions into different programs aimed at drug-legalization.

On Feb. 7, 1996, I observed in The Wall Street Journal that Soros’ “sponsorship unified the movement to legalize drugs and gave it the respectability and credibility it lacked.” I then opined that unchallenged, Soros would change the political landscape in America. But patiently, Soros has achieved what he set out to get. Soros, whose motto is, “If I spend enough, I make it right,” uses his donations and philanthropy to change–or more accurately deconstruct–the moral values and attitudes of the Western world, and particularly of the American people. While others give to the arts and higher education or to better the quality of the lives of their fellow men, Soros has been funding campaigns for drug legalization, and “medical marijuana,” which is described as a “compassionate drug.”

os and the other proponents of medical marijuana and drug legalization claim that the price of government-provided “legal” drugs would significantly lower their current price, removing the necessity to commit crimes in order to secure the drugs. But how much would governmental administration add to the cost? And what will happen when the “tax” is added on? When the government outsources the production and distribution, would pharmaceutical and new marijuana-cigarette producers be asked to give up their profits? How much would it cost to investigate the black market that will flourish supplying groups prohibited by law from receiving drugs–adolescents, airline pilots, police officers, etc.? This new industry could create jobs. But are there going to be enough sober workers to perform them?

NIDA’s solicitation for marijuana growth for research is nothing new. Marijuana studies have been conducted over decades, and thousands of them document the adverse effects of this controlled (illegal?– it is not controlled yet) substance. Yet, now, for the first time, the government is soliciting organizations that can grow marijuana on a “large scale,” with the capability to “prepare marijuana cigarettes and related products … distribute marijuana, marijuana cigarettes and cannabinoids, and other related products” not only for research but also for “other government programs.” Since when is the U.S. government in the business of distributing marijuana cigarettes? Is this part of the healthcare programs the Obama administration is so keen to enforce?

Since Obama took office, “medical marijuana” dispensary owners in some of the 15 states where it’s legal, or tolerated, report requests “climbed sky high.” Medical Marijuana, Inc., an Oregon-based company, which has been traded on the Nasdaq since April of 2009, offers solutions for this emerging industry. Its Web site claims that “the number of ailing people turning to medical marijuana to ease their symptoms has spiked in 2009. Requests have jumped anywhere from 50% to 300%.” In California, where medical marijuana is already legal, a massive campaign is underway to legalize all uses of the drug. Soros and other pro-drug legalization organizations claim that tax revenues from marijuana sales would fill the empty coffers of the state with at least $1.4 billion for the first year. The more users, the more money for the state.

A revenue collection system is already in place to ensure the tax revenues for the states that allow “medical marijuana.” The system, developed by Medical Marijuana, Inc., boasts, “The Stored Value Platform System, a point-of-sale system, is a hallmark element of Medical Marijuana’s business solutions package.” The company has already signed on many marijuana collectives, and lobbies heavily to sign on the City of Oakland, Calif., which is the first city in the nation that voted in favor of collecting tax proceeds from marijuana sale, “as part of the solution to Oakland’s longstanding budget shortfall.”

California’s current attorney general is former Mayor Jerry Brown, who now runs for governor. While he was previously governor of California (this is confusing? Is he running for governor again?) from 1975 to 1983, Brown lowered the fines on marijuana possession. Yet, now he says, “If the whole society starts getting stoned, we’re going to be even less competitive.” As for the harm caused by using marijuana, NIDA reports: “marijuana smoke contains 50% to 70% more carcinogenic hydrocarbons than does tobacco smoke … which further increases the lungs’ exposure to carcinogenic smoke.”

Moreover, “marijuana users have a 4.8-fold increase in the risk of heart attack in the first hour after smoking the drug …This risk may be greater in aging populations or those with cardiac vulnerabilities.” In addition, marijuana use causes “distorted perceptions, impaired coordination, difficulty in thinking and problem solving, and problems with learning and memory,” lasting weeks after the initial use. “As a result, someone who smokes marijuana every day may be functioning at a suboptimal intellectual level all of the time.” If the government legitimizes marijuana use and develops a new marijuana cigarettes industry, Soros will no doubt boast that he had a part in this feat.

The evidence about the harm caused by marijuana to the individual user and society is overwhelming. Yet the government is now moving for large production and distribution of marijuana. If this is part of the ObamaCare project, it would surely cause the opposite of what it is purporting to do.

* Rachel Ehrenfeld, author of Funding Evil: How Terrorism is Financed and How to Stop It, is director of the American Center for Democracy.