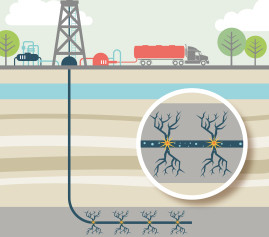 Whether the fourth quarter 5% growth of the U.S. gross development product [GDP] is a fluke, another wave of the troubled sea of the longest recovery in recent American history, it is evidence of the miraculous strength of the U.S. economy.

Some are predicting it means a return to 3% annual growth rates next year, still not what is required to reduce both cyclical and the new digital revolution induced structural unemployment, but back to “normal” trends.

The war the Obama Administration has been waging against business, private initiative, and historical American innovation hasn’t been able to stifle the basic American entrepreneurial spirit. Nowhere is that more apparent, of course, than in energy.

For the energy revolution, which has come about as a result of the private sector pursuing new technologies to develop shale gas and oil, of course, are at the center of the miniboom. And, the chutzpah of the Obama Administration’s claiming credit for something it fought as vigorously as its amateur planners could – promoting higher energy costs to encourage their vaunted shift to new fuels — is even by the standards of this Administration, outrageous. It remains to be seen whether a new administration in 2017 might open government including offshore lands and reinforce the U.S.’ position already as the number one oil producer in the world and a potential major gas exporter.

Whether it is recreational drivers enjoying the new, lower gasoline prices, or the petrochemical industry moving back from overseas to use as throughput cost a price for gas a quarter of deliveries in East Asia, the domestic economy is getting a shot in the arm. Not even the threat of an unconstitutional Obama’s Environmental Protection Agency all-out attack on all American electrical production and manufacturing can stymie the trend.

The international impact of this remarkable and relatively sudden development is still playing out.Visit Site

The world energy price, however much markets are segregated by political concerns, is still in the throes of being threshed out. But lower energy prices, even in the fickle oil market, are obviously with us for several years. That’s the result of the American shale revolution, but also – despite all the feuds and guerrilla in the Mideast – the coming on market of more and more production. Boycotts and sanctions have only increased the black-markets nipping and tucking through all the back alleys of the world economy to market more oil.

It’s hard to know where to begin with what we already see as the immediate results of the world energy goldmine:

Saudi Arabia, hoping to impede the American and foreign shale revolution with its higher costs, is pumping more oil than ever from its low-cost resources. It hopes not only to have an effect on a possible competitor as the U.S. moves to becoming, again, a gas [liquefied natural gas, LNG] and oil exporter, but to deal a blow to its Mideast rivals.

Venezuela’s two-bit caudillos are in trouble with their heavy oil. [They will have new competition as the Keystone XL Pipeline finally overcomes Obama’s opposition to deliver similar Canadian tar sands oil to the Houston where one of the few refineries, which can handle Caracas’ goo, exists]. Nor can the collapsing Venezuelan regime continue to feed subsidized energy to its leftwing anti-America playmates. It remains to be seen if Obama’s life preserver thrown to a Castro regime, the first victim of such a shutoff, can save that crumbling dictatorship which has brought infinite misery to its people.

Lower world oil prices may be able to restrain an aggressive Tehran. They may do what American sanctions and a less than dedicated Obama negotiation to block the mullahs’ drive for nuclear weapons has not done. Lower oil prices for its relatively high cost production is tearing the guts out of an economy already in trouble on a variety of scores.

The Chinese are also on a downward spiral as their two big economic props – massive infrastructure development and exports – are being undermined, the first by a crippling debt crisis and the second by a dawdling world economy and growing competition from other low wage producers. But new cheaper worldwide energy will help as they are unable to turn to their own shale resources [mismanagement and lack of technology], as they become larger importers.

Japan and South Korea’s stagnating economies, too, will profit from their lower energy import costs, especially Abemomics in Japan which has had to suffer cutbacks in its heavy reliability on nuclear power as a result of the 2011 earthquake and tsunami catastrophe.

There are going to be groans and yelps from the great international oil conglomerates, too, which have been riding high in the stock markets on high prices and profits. That may discombobulate some of the financial crowd and some of their kept media, but cheaper worldwide energy is bound to move the world economy forward – and in the process cripple some of the worst corrupt regimes. Not a bad way to enter the New Year, all things considered.

A version of this column has been posted Monday, Dec. 29, 2014, on the website http://yeoldecrabb.com/