Obama and Kerry Deny Recognition of Israel as the Jewish State 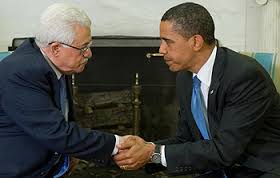 On March 20, 2013, in Jerusalem, President Obama recognized Israel as the Jewish State. Moreover, he insisted the ”Palestinians must recognize that Israel will be a Jewish state, and that Israelis have the right to insist upon their security.” He repeated this statement the following day, saying, “let me just reiterate that a central element of a lasting peace

must be a strong and secure Jewish state, where Israel’s security concerns are met, alongside a sovereign and independent Palestinian state.”

In Jerusalem, in December 2013, Secretary of State John Kerry stated:

“And I join with President Obama in expressing to the people of Israel our deep, deep commitment to the security of Israel and to the need to find a peace that recognizes Israel as a Jewish state, recognizes Israel as a country that can defend itself by itself, and that is an important principle with which the prime minister and the President and I are in agreement.”

Exactly a year later Obama is denying Israel’s right to be recognized as a Jewish State. During his March 20 meeting with PA president Mahmoud Abbas, President Obama omitted talking about the Israeli recognition requirement in favor of stressing security concerns.

Signs of Obama’s changing policy were seen earlier this month.

Testifying before the House Foreign Affairs Committee on March 13, Kerry said, “I think it’s a mistake for some people to be raising it [recognition of Israel as a Jewish state] again and again as the decider of their attitude towards the possibility of a state and peace, and we’ve obviously made that clear.”

On Saturday, March 15, State Department Spokeswoman Jen Psaki said: “The American position is clear, Israel is a Jewish state. However, we do not see a need that both sides recognize this position as part of the final agreement.”

However, as David Bukay has explained: The Palestinians’ right of return was never related to the occupation of 1967 territories, but to the 1948 occupation; and it is not two states’ solution living in peace, based on territorial division of 1967 border (with or without exchanged territories), but the entire territory ‘from the Sea to the River.’ This reality is proved by the demand to fulfill and to accomplish the right of return, which is a pure euphemism for Israel’s destruction as a Jewish-Zionist independent state.”

Apparently, Obama and Kerry have joined the Palestinians’ demand that Israel should stop being Israel, and that Jews, in ethnic or religious terms, shouldn’t exist.  Even Kerry, who in February repeated the Palestinian threat that if the Israelis didn’t agree to a deal they would face isolation and boycott, knows that presenting a comparable notion by recognizing Israel as a Jewish state to the Palestinians, wouldn’t fly.

Another part of this reversed U.S. position lies in Kerry’s repetition of the fact that the issue of whether Israel was a Jewish state was resolved in 1947, when UN Resolution 181, which divided Palestine into a Jewish state and an Arab state, was passed.  The resolution referred to “Jewish state” innumerable times.  And he also mentions that Yasser Arafat explicitly recognized Israel’s right to exist as a Jewish state.  What he doesn’t mention is that Abbas who claims he “accepts” Resolution 181, insists it does not include the recognition of Israel as the Jewish State. Instead, he repeatedly declares that the future Palestinian state would not include the presence of a single Israeli.

Kerry, is now trying to give the PA what it wants and, once again, the administration is calling on Israel to be “reasonable” by giving in.

If confronted with the record, both Obama and Kerry, typically, would try to finagle the record to claim that nothing has changed or that the “Jewish state” they were talking about wasn’t entirely the same as the one they are talking about now, or the one that Bibi Netanyahu or Mahmoud Abbas understand. Nonetheless, they should be challenged.

Bryan Bender: Kerry fires back at critics of peace negotiations