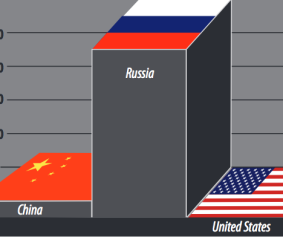 Left: Plutonium pit production estimates for 2014. Russia has the ability today to produce at least 1,000 plutonium pits per year for use in building their new nuclear weapons. The United States, in contrast, has only one plutonium pit facility—an improvised one at Los Alamos—which has produced 29 certified pits since 1989.

Today, in contrast to what is happening at their American counterparts, these Russian institutes are seeing their benefits, compensation appreciation, working conditions, facilities, and meaningful research significantly improve.

Rigorous research—including year-around experimentation at their Novaya Zemlya Test Site, which is leading to the development and deployment of new Russian nuclear weapons for newly designed delivery systems—continues to be their top priority.

The improvements in Russia’s nuclear capabilities are leveraged off the increased profits garnered from Russian exports of oil on the one hand and driven by new confrontational trends in foreign policy on the other. The net result is that, at a time when U.S. nuclear weapon budgets are being cut and U.S. nuclear weapon experts are being offered early retirements or terminated, Russia’s 2014–2016 defense program is planning a 50 percent spending increase in its nuclear program, designed to fund a significant upgrade in Russian strategic nuclear forces in conjunction with more Russian nuclear weapons research.

One important example of technological surprise from the Soviet nuclear weapons program occurred in the early 1960s. Soviet scientists had for years published numerous technical articles on the effects of x-rays on polymeric materials. Suddenly, they quit publishing. This aroused the interest of attentive U.S. IC experts.

The problem was that the Russians had discovered a vulnerability in the polymeric heat shields used to protect the US warheads during reentry. These heat shields were made of polymers that were reinforced with asbestos fibers. In evacuated chambers at the Nevada Test Site, we exposed our heat shields to the intense x-rays that the tests produced. Surprisingly, the heat shields failed catastrophically.

This discovery was a real shocker. The Soviets had discovered that if they detonated one of their nuclear weapons in space anywhere near our incoming warheads, the intense x-rays would destroy the warheads’ heat shields. Unbeknown to us, all of our warheads were fatally flawed. This prompted the immediate development of new x-ray-resistant, graphite-reinforced heat shields for U.S. warheads, and these are still in use today.

Other examples of technological surprise from the Soviets include the rapid development of their first atomic bomb and their design and demonstration of the first thermonuclear bomb (a.k.a. hydrogen bomb). (Whereas the United States tested the first thermonuclear device, the Soviets were the first to make it a deliverable weapon.) They discovered that high-altitude electromagnetic pulses (EMPs) had catastrophically damaging effects on electronics, and they created special alloys for use in their nuclear weapons to counter those effects. The Soviets also were the first to deploy neutron bombs (enhanced-radiation weapons). Without going into details, each of these developments gave the Soviets military advantages.

Only because we learned of their work were we able to evaluate and counter it with our own developments, strategies, and/or new technologies. Given this prior record of important discoveries by our adversaries, any nuclear weapon reduction initiative must consider the possibility that other new-concept weapons or defenses could be developed that would provide strategic and/or tactical advantages.

Whatever the actual status of Iranian nuclear weapon ambitions and capabilities, the rhetoric and ambitions expressed by Iran would lead one to conclude that nuclear weapons are an essential element in the reestablishment of Iran’s historical dominance within the Fertile Crescent.

It is also possible that while foreign nuclear weapon programs could develop new weapons, these might not meet political definitions of “strategic” or even “nuclear” weapons. The problem then—for nuclear arms control and for deterrence—is that such novel weapons may not be considered as candidates for reduction under the terms of extant negotiated reduction agreements concerning strategic nuclear weapons.