No Jihadist Left Behind 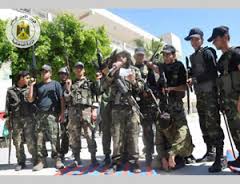 No child is left behind the new mandatory Jihadist education program in Gaza.

Muslim Brotherhood’s ideologue and chairman of the International Federation of Muslim Clerics, Youssef Qaradawi, was surely proud to see that his decades-long virulent preaching for Muslims to “carry out Jihad to death,” has been taken seriously by HAMAS.

Tens of thousands of teenage boys in the Gaza Strip have been receiving weekly jihadist/terrorist training in school, as part of the mandatory “Al-Futuwwa” (Youth Courage) program. Videos of the program have been posted on YouTube to further the radicalization of Arabic-speaking Muslims and non-Muslims alike.

The Meir Amit Intelligence and Terrorism Information Center* exposé should leave no illusions regarding “peace” in the region anytime soon.

“Hamas has introduced a program in Gaza Strip schools called Al-Futuwwa, which provides military training for tens of thousands of adolescent boys.”

1. Since September 2012 Hamas has run a new program called Al-Futuwwa (“youth,” “courage”) in high schools in the Gaza Strip. In the program, tens of thousands of adolescent Gazan boys receive theoretical and practical military training.

The program has three components: military classes are held weekly in the schools, there are two-week training camps held during school breaks, and practical activities carried out with operatives of the Izz al-Din al-Qassam Brigades, Hamas’ military-terrorist wing. An article in the British newspaper The Guardian recentlymreported that the weekly classes are part of the curriculum for 37,000 boys aged 15 to 17, of whom about 5,000 have participated in the training camps. They train with Kalashnikov assault rifles and learn how to use hand grenades and detonate IEDs.

2. The military training program is part of comprehensive indoctrination and practical activities held by Hamas for the younger generation in the Gaza Strip.

The activities which begin in kindergarten and continue on into university, are meant to raise a new generation of motivated military and political operatives and activists and to brainwash them with Hamas ideology (the so-called “liberation of Palestine,” refusal to recognize the State of Israel or its right to exist, nurturing the path of jihad and fostering radical Islam).

3. Hamas expects that this new generation will participate in the armed campaign against Israel as operatives in the Izz al-Din al-Qassam Brigades and will integrate into the Hamas movement and administrative activities, thus ensuring Hamas’ long-term control of the Gaza Strip. Another of the program’s objectives is to reinforce the Izz al-Din al-Qassam Brigades’ image as an “army of the people” operating in the service of the movement’s administration, as opposed to the military terrorist wings of the other terrorist organizations, whose role is secondary and which represent affiliation with one faction or another.

4. During 2012, called by the de-facto Hamas administration “the year of Palestinian education,” Hamas introduced a program in its high schools called Al-Futuwwa (“youth,” “courage”). Its objective was to integrate military studies into the schools run by Hamas to raise a new generation of operatives and activists to “serve the homeland” and “expel the Zionist occupation from the land of Palestine” (Hamas forum website, January 24, 2013). The ministries of education and the interior of the de-facto Hamas administration direct the program with the support of the Izz al-Din al-Qassam Brigades and Hamas’ security services.

5. An article in the British paper The Guardian recently reported on Al-Futuwwa. Its main points were the following [ITIC emphasis throughout]

a) The high school curriculum includes weekly classes in which boys become familiar with Kalashnikov assault rifles and other weapons. Instructors from the interior ministry’s national security services also teach first aid, firefighting and the values of “discipline and responsibility.” Parents can remove their sonsfrom the program but rarely do so.

b) To supplement the course there are voluntary camps during school breaks, in which boys are instructed in how to handle guns and explosives.

The Izz al-Din al-Qassam Brigades operatives assist in the training using live ammunition and real explosives (Note: See the military display below, photographed at the Gamal Abdel Nasser School in Sajaiya in the eastern Gaza Strip).

c) 3) According to the Hamas ministry of education, the course is now part of the curriculum for about 37,000 pupils aged 15 to 17. So far, about 5,000 have participated in the training camps. A 17 year-old boy (called “Mohammed” in the article) said that he spent six hours a day for two weeks at a training camp, along with 170 other students from his school. They practiced firing Kalashnikov assault rifles, using hand grenades and detonating IEDs. Their instructors were operatives from the Izz al-Din al-Qassam Brigades and Hamas’ national security. The boys learned “self defense” and how to “confront the occupation” [i.e., fight Israel]. “Mohammad” said that he supported Hamas and would consider joining the Izz al-Din al-Qassam Brigades.

In March 2013 Mahmoud Syam visited a number of high schools where the program was being taught, and said that so far it had achieved its aims and that the government also was considering adapting the program for high school girls.

Participation in Operational Activity on the Ground

7. Al-Futuwwa students are integrated into the operational activities of the Izz al-Din al-Qassam Brigades to complete their training and theoretical studies.

According to the Hamas forum, on May 3, 2013, 140 Al-Futuwwa students participated in nighttime activities in Gaza along with operatives from the Izz al-Din al-Qassam Brigades, Hamas’ military-terrorist wing. They patrolled and secured junctions and other key points in Gaza City (Hamas forum website, May 3, 2013).

8. On April 10, 2013, Al-Futuwwa students held a military display at the Gamal Abdel Nasser school in the Sajaiya quarter in eastern Gaza City. They simulated the attack and takeover of an “IDF post,” the abduction of an “Israeli soldier,” and ended the display by firing anti-tank weapons at the “Israeli post.” They used live ammunition before a large audience. The display was conducted by a Hamas announcer who excited the audience by promising more explosions for “the Zionist enemy.” The display was taped and posted on the GAZA ALAN Facebook page (GAZA ALAN Facebook page, April 10, 2013). It was also posted on YouTube. (https://www.youtube.com/watch?v=3R6BSxpl7_0).

Criticism of the Al-Futuwwa Program

9. Samir Zakout, director of the field research unit of the Al-Mezan Center in the Gaza Strip[1],was severely critical of the de-facto Hamas administration for introducing the Al-Futuwwa program into Gaza Strip high schools. He called the program “empty and with no educational content.” He added that the Hamas administration first had to solve more important problems in Palestinian education in the Gaza Strip and provide them with educational values in a different way. He said that Al-Futuwwa was liable to endanger the schools in the Gaza Strip and expose them to attacks by the Israeli Air Force (MBC-TV, Dubai, November 12, 2012).

10. On another occasion, quoted by The Guardian’s correspondent in the Gaza Strip, Samir Zakout said that Hamas had cut sports activities for the past six years, and how had found time to have military training in schools. He added that Hamas was building a “military culture” and creating the next generation of “militants.”

[1] The Al-Mezan Center is a Palestinian NGO based in the Gaza Strip. Its main office is in the Rimal quarter of Gaza City, and it has branch offices in Jabaliya and Rafah. It is headed by Issam Yunis, who has a Master’s degree in human rights from Essex University in London. The organization plays a prominent role in anti-Israeli lawfare in collaboration with other Palestinian NGOs.