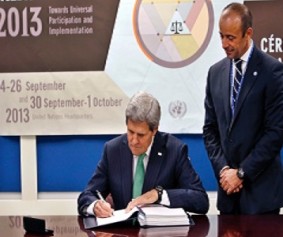 Secretary of State John Kerry signed the United Nations Arms Trade Treaty against the clear wishes of the U.S. Senate-there were 51 votes against it last March. Now it will be important for the Senate to refuse to ratify this ill-advised treaty which is not in our national interest and could lead to unwelcome constraints, enforced by international bodies, on our Second Amendment Constitutional rights.

On the heels of his brilliant effort in setting up Russia’s President Vladimir Putin to lead in accounting for and eliminating the chemical weapons of its ally Syria (stay tuned) and setting the stage for Iran, another Russian ally, to continue its development of nuclear weapons while its new “moderate” President Rouhani thumbs his nose at U.S. interests, Secretary of State John Kerry signed the United Nations Arms Trade Treaty (ATT). This Treaty, which is not consistent with U.S. interests, would empower an international body to inject itself in the activities of American citizens in ways that could lead to a loss of our Second Amendment rights.

Secretary Kerry argues that the Obama administration’s action will not conflict with our Second Amendment rights, by pointing to preamble language that refers to the “sovereign right of any state to regulate and control conventional arms exclusively within its territory” and “the use of certain conventional arms for recreational, cultural, historical and sporting activities.”    But language of the ATT itself could be interpreted to be contrary to this reassurance.

Furthermore, the Obama administration’s record of unilaterally interpreting statutes-even ignoring them when it serves the President’s purposes, argues against imagining that the ATT would be implemented in anything other than the broadest possible manner to support the President’s well known predilections to restrict the rights of gun owners.

Some Provisions of Concern

The Gun Owners of America, which among others who oppose the Treaty, has provided an analysis (click here to read) that includes the following:

Article 1 states that one of the two objects of the treaty is to “[p]revent and eradicate the illicit trade in conventional arms… for the purpose of…[r]educing human suffering.” (No exclusion is made for domestic sales and possession of firearms.) “Illicit” sales could be used as a pretext to regulate legal sales, e.g., this year’s fight against regulating LEGAL firearms sales as advocated by the “Mayors Against Illegal Guns.”

Article 5 states “[e]ach State Party is encouraged to apply the provisions of this Treaty to the broadest range of conventional arms.”

Even if the U.S. withdraws from the treaty, it may “not be discharged, by means of its withdrawal, from the obligations arising from this Treaty while it was a Party…” Hence, the United States could be barred from repealing its national gun registry.

Under Article 17, the treaty will be interpreted by a Conference of State Parties, and, under Article 20, after six years, can be amended by a three-fourths vote. Although the United States must accept the amendment to be bound, the acceptance may be accomplished by unilateral action of the president.

Article 9, purporting to deal with “Transit or trans-shipment,” states: “Each State Party shall take appropriate measures to regulate, where necessary and feasible, the transit…under its jurisdiction of conventional arms…through its territory…” (The breadth of this language far exceeds its alleged intended purpose: Transport of a gun from California to New York-or even from your home to your place of business-is transportation “through the territory of the United States”-and may be regulated in any way the Obama administration deems “appropriate.”) Article 9 imposes no limitations whatsoever on the types of regulations which can be imposed, including gun bans and micro-stamping requirements.

Furthermore, Article 14 provides, in its entirety: “Each State Party shall take appropriate measures to enforce national laws AND REGULATIONS that implement the provisions of this treaty.” [Emphasis added] Therefore, if, under Article 9, the government is given a carte blanche to regulate guns, under Article 14, it is authorized to regulate by administrative fiat.

Article 11 requires each “State Party involved in the transfer of conventional arms” to “take measures to prevent their diversion.” Remember that, for the ostensible purpose of preventing arms from going to drug cartels in Mexico, Attorney General Eric Holder established an illegal system requiring the reporting of guns purchased in certain states.

If ratified, this treaty has the force of law and potentially could surrender American sovereignty to U.N. enforcers which makes it even more dangerous to our Second Amendment rights.

The good news is that Senator Jim Inhofe of Oklahoma long ago said “no way” to Obama’s attempt to give away American sovereignty and undermine the Constitution through this treaty. On the 30th anniversary of President Ronald Reagan’s speech that launched the Strategic Defense Initiative (SDI), March 23, 2013, Senator Inhofe forced a vote on an amendment intended to block the U.S. from joining the U.N. Arms Trade Treaty-and fifty-three Senators from both parties went on the record to vote against the treaty. So in principle, the President does not have the necessary two-thirds majority required by the Constitution for ratification of a treaty.

Wednesday, Senator Inhofe wrote to Secretary Kerry (whichyou can read here) reminding him that the Administration lacks the two-thirds support in the Senate necessary to ratify the treaty.  “Sec. Kerry and President Obama are at it again,” said Inhofe. “As we saw in 2009 with cap-in-trade in Copenhagen, Sec. Kerry and President Obama are being dishonest by telling the United Nations that we’ll be a part of the U.N. Arms Trade Treaty. This treaty is already dead in the water in the Senate, and they know it.”

On the other hand, President Obama’s record of ignoring the Constitution, and laws that Congress passes, is a warning even in the absence of a ratified treaty.  You should stay alert to how this plays out and where possible demand that our senators be vigilant against any Obama action to implement the United Nation’s Arms Trade Treaty through executive orders or other extra-constitutional means.

Blocking Arms Control by Executive Order is Important for SDI!

The tactic of arms control by executive orders could also be used to constrain other possible activities in our security interests.  Of great concern to High Frontier and many of our friends are possible limitations on our ability to fully develop the most effective ballistic missile defenses-namely those based in space.

As Ronald Reagan intuitively understood, space-based defenses are the most cost effective defenses possible-and his SDI program proved it on my watch as SDI Director. But space based defenses have been ignored since the beginning of the Clinton administration when then Defense Secretary Les Aspin “took the stars out of Star Wars.”  An executive agreement could permanently block them for defending America-we need to make sure this doesn’t happen!

An alleged concern about space debris, which is overstated and often hyped, is one particular area that should be watched closely to assure that executive agreement initiatives are not imposed to limit our technical options for building a space-based global defense for the American people and our overseas troops, friends and allies.