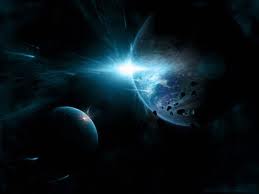 On September 30, the American Center for Democracy staged a roundtablediscussion on “Energy, Space & Cyber Insecurity – Current and Future Threats.”  We bring you several thought-provoking “What If …? Scenarios by William B. Scott, a former editor of Aviation Week, and an ACD Fellow.

John Kenneth Galbraith once said, “Only a fool tries to predict the future.” If that’s so, there’s an abundance of well-paid jokers in prestigious think tanks and on cable TV talk shows. However, a much larger-and less-well-paid-group of hopelessly afflicted prognosticators can be found in the ranks of fiction writers. Science fiction and techno-thriller authors, in particular, can’t resist future-gazing; it’s in our DNA to dream up an engaging story by starting with a simple question: “What if…?”

History suggests that writers have a better track record of foreseeing world events and technological advancements than think-tankers and TV talking heads do. Or maybe not. One school of thought says fiction writers don’t really predict the future; their stories merely prompt policymakers or scientists and engineers to think differently about a problem, and events unfold along the same lines sketched by authors.

Having worked as both an engineer and aerospace journalist, I can testify that writing techno-thriller novels is more fun than solving real-world technical problems and reporting hard news. Authors can dream up wild stories and high-tech weapons, yet never worry about annoying constraints like facts and physics. We rarely have to be concerned how a futuristic system would actually be designed, built and employed.

That said, authors are pleasantly surprised when future-gazing scenarios and systems they wrote about years earlier actually come to pass. Rather than predicting the future, though, I think we merely look at a geopolitical situation or technology and extrapolate forward several years.

I’d like to share some of the futuristic space-related capabilities that started as “What ifs,” and ultimately were incorporated into our “Space Wars” and “Counterspace” novels. Please consider the potential impacts, if America’s smart scientists and engineers actually developed and fielded the following:

* A MASER beam weapon that disables an adversary’s satellite, by creating mini- electromagnetic pulses in electronic systems. It’s feasible, and sources claim it’s been done in the Navy’s China Lake labs, by initially firing a laser to create a momentary “waveguide” or “filament” through the atmosphere, then firing a MASER’s microwave pulse down that channel.

* Hypervelocity weapons delivered from a piloted spaceplane in low-Earth orbit. Basically a titanium bar boosted by a rocket, these “Rods from God” can take out an underground nuclear facility without an explosive. A dense-material “warhead” propelled at hypersonic speed delivers a tremendous amount of kinetic energy in a brief time span. Basically, a Rod from God has the impact of a tactical nuclear weapon-but is covert and leaves nothing behind that can be traced to the U.S.

* Space-based “Angels and Demons.” “Angels” are small, stealthy spacecraft deployed in-orbit to protect our own high-value satellites. “Demons” hover near an adversary’s satellite, quietly waiting. In an emergency, “Demons” can be activated and ram the bad guy’s satellite to disable it. If a “soft kill” is warranted, a Demon might just squirt “slime” onto a target’s optics to temporarily blind a reconnaissance bird.

* A “Hoover” anti-satellite system. This is a stealthy spacecraft that could vacuum-up debris left in orbit by China’s 2007 hit-to-kill test, for example, then park behind an active Chinese military satellite. During a conflict, “Hoover” could silence its neighbor by firing orbital debris at the satellite. People’s Liberation Army forensics experts would have to conclude that they’d “shot themselves down” with their own space junk.

In the cyberwar realm, here are some futuristic weapons and information warfare scenarios my coauthors and I dreamed up, starting with a “What if…?” question:

* An electromagnetic or electrostatic system that remotely disrupts the electrical activity of a human heart. Fired from a drone or aircraft, these tailored signals trigger heart attacks and strokes, covertly killing a rogue nation’s dictator or terrorist cartel’s leaders.

* “Smart Dust” to locate and neutralize terrorists. Tiny, nano-scale systems that can be programmed to operate cooperatively would be scattered from the air over a target community. Microscopic “Hunter-Bots” could be programmed to search for the DNA of a particular suicide bomber. When they get a match, they’d clear in companion “Killer- Bots,” which would be injested by a terrorist’s wife, children or siblings. Bio agents coating the Killer-Bot nanoparticles would radically alter the target’s behavior, ultimately causing considerable shame to be heaped on the suicide bomber’s memory. Soon, nobody volunteers to strap on the suicide belt.

* The ultimate cyber attack might be a biostatic signal that affects a person’s brain, by altering his thoughts. Maybe a wannabe suicide bomber’s thinking could be reprogrammed, inspiring him to leave his explosive vest in the attic and just keep driving the cab.

* Along the same line, what if biostatic signals could be tailored to a person’s DNA, enabling the insertion of false images into a specific target’s brain? He THINKS he sees an object with his eyes, but the object isn’t really there. It only exists as an image in his brain, created by engineered biostatic signals beamed from a stealthy drone. The target could no longer tell the difference between what’s real and what his brain falsely registers as if it were seen through his eyes.

What might be the effect of “brain-spoofing”-inserting false imagery? Maybe a political or military leader would conclude that he’s hallucinating and going crazy. Could that leader rapidly lose the confidence and trust of subordinates, rendering him ineffective?

Bottom line: Brain-spoofing and cyberwar weapons designed to interact with human biological systems would be invaluable for instilling fear, doubt and division in an enemy force.

Such wild-eyed concepts and scenarios may be confined to the realm of fiction, never to be realized in the real world. But perhaps the mere possibility that they could be developed and fielded is enough to neutralize threats. That’s why authors and screenwriters are a form of cyberwarrior. Historically, fiction/entertainment has been employed as one of mankind’s most powerful vehicles for shaping perceptions. Stories are no-harm, no-foul vehicles, allowing one to suspend skepticism and barriers to belief. After all, we’re just being entertained, right?

Hollywood’s been using subliminal programming quite effectively for decades. For example, movies in the 1950s and ’60s, such as “On The Beach” and “Dr. Strangelove,” portrayed the horror of nuclear war in vivid, personal terms. Did stark movies and literature of the time help shape policies and decisions that prevented nuclear war? It’s hard to tell, but maybe they inspired us to collectively decide, “Let’s not go there.

A second example: “The China Syndrome,” a gripping movie about a nuclear reactor meltdown, was released in 1979. About three weeks later, the real-world Three-Mile Island reactor accident occurred. The combination of movie and real-world accident virtually killed the nuclear power industry for more than thirty years.

Perhaps it’s a stretch to classify fiction and entertainment as “soft cyberwar,” but what if…? What if fiction authors and Hollywood screenwriters were engaged to create entertainment featuring advanced, horrific weapons and tactics that instilled fear and dissension among terrorist bands and deadly criminal cartels? What if these stories rapidly spread throughout a culture via books, TV shows, the Internet and movies, capitalizing on the power of entertainment to shape perceptions?

What if such a campaign were already underway? Maybe it is.

*William B. Scott is a Senior Fellow at the American Center for Democracy