Needed: “Leadership Out of the Swamp” 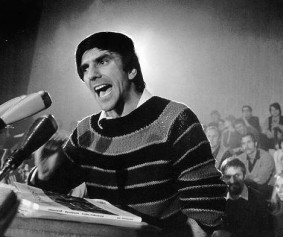 “The long march through the institutions” halts — temporarily?  – by Sol W. Sanders*

In 1967 Rudi Dutschke, a flamboyant leader of post-World War II European student radicals looking back on two centuries of failed revolutions, had an epiphany: Instead of attacking prevailing institutions head on, he advocated that his fellow revolutionaries should take a “long march through the institutions of power to create radical change from within government and society by becoming an integral part of the machinery.” In the decades since, more than one aspiring revolutionary has attempted to implement his strategy, some even claimed credit for inventing it.

That all comes to mind, now, trying to make sense of Obama administration policies through the fog of its obvious overwhelming incompetence. One begins to discern a pattern, a template that does come right out of the ’60s. And alas! It is, willy-nilly, by accident or design, a success — albeit temporary — for “a long march through the institutions.”

We know less than we should about President Barack Hussein Obama’s own scholastic life, mainly because he has expended every effort and vast sums to block the normal scrutiny given politicians. But enough is known to perceive him as one of those young radicals who took “the long march.” Policy in the second administration — now free of any new electoral veto except for next year’s mid-term Congressional elections — reflects all the old attitudes of generations of dissent from the left to traditional American values and resulting domestic and foreign policy.

The current tempest over Obamacare is, of course, not only quintessential but expresses the state of mind of the country’s current elected executive. One is tempted — seeing the unbelievable extent of the disastrous rollout — to see conspiracy. For even to the least computer-literate among us, whose daily lives involve constant contact with remarkably skilled IT marketing and billing in the private sector, it is inconceivable that the federal government could not have employed commensurate skills. Was this incredible mess just an accident characterizing the incompetence of the Obama Administration? Or did “the evil geniuses” behind Affordable Care — for example, the estimable “bioethicist” Dr. Zeke Emanuel — really intend chaos? Could it have been they meant to destroy former health care patterns, whatever their shortcomings, to create a situation so enervating that an exhausted body politic would accept Obama’s favored solution: “single payer,” “socialized,” government-mandated medicine?

Probably not, simply because it’s clear the technicians, at least, suspected a coming disaster that has overtaken the purported “chief legacy” of the Obama administration. The ObamaCare chaos has now jeopardized, at least temporarily, the whole “liberal”/left agenda. But what we do see, in fact, is an aspect of that same “long march through the institutions.” Individuals have reached the government zenith with the mindset of earlier generations of American pseudo-revolutionaries who along the way enthralled a less astute and pampered academic and media elite.

Evidence for this hypothesis is even more dramatic in the Obama administration’s foreign policy. For there, except in moments of crises, the U.S. public’s interest and direct involvement is minimal. American lifestyle with its abundance not only of the necessities of life, but increasingly luxuries in the pursuit of elaborate leisure patterns, has given determined leadership an opportunity: Making external policy has been a plaything of the elite because of a largely apolitical citizenry.

So it was that idealists (and some realists) seized world leadership vacated by an exhausted Europe after World War II. An increasingly prosperous American public was willing to pay the bills without too many questions, especially since it offered new opportunities in foreign trade. It permitted Washington to contribute mightily to the reconstruction and growing prosperity of the Europeans. At the same time, it called for continuing sacrifices for policies — not always astute — in defeating the new totalitarian menace of the Soviet Union and world Communism. It even took a hand, with not all that much success, in efforts initiated by the former European colonial powers, to lift so-called Third World countries out of their misery.

But always at their back were the minority voices on the left. They were armed, often, with sound argument based on gaps in strategy and policy — or the obvious failures such as unresolved wars in Korea, Vietnam, skirmishes in Latin American, and now Iraq and Afghanistan. Their litany was never exclusive. They often shared common cause with individuals in the political center and the right. And that old cliché about the commonality of extremes was certainly often the case: “Isolationism,” for example, on the “far right” was often shared by the “far left” if for very different reasons. But today in part because of the vacuum created by the Obama administration’s “leading from behind,” bereft of American leadership destructive regional forces in almost every quarter of the globe have been unleashed.

This arrival of the left at 1600 Pennsylvania Avenue via the long march zigzags back to an earlier time. But its fundamental beliefs, again allowing for its performance inadequacies, are clear:

· A cultural war against traditional American institutions, disparaging and denigrating historic icons, emphasizing the foibles and transgressions (e.g., the unresolved issue of slavery) of the Founders. Their unique contribution to Western political thought through their major achievement, the American Constitution, is seen as a “bourgeois” formula, its fundamentals to be amended or circumvented by “progressive” thought supposedly allied to changing economic and social conditions.

· Increasing government intervention as the solution to all social and economic policies. Mounting evidence that many of the governmental social programs have had enormously damaging unintended consequences has not been a deterrent. Broader government powers of direct intervention and regulation have been seen as the only solution to the increasing complexities of modern life.

· Anti-anti-Communism whereby Soviet totalitarianism was given a pass. Supporting its satellite proponents in Cuba, Nicaragua, Chile, Vietnam, or even North Korea in its earliest days, was a “progressive” pilgrim’s progress. In its most extreme forms, advocates proclaimed the necessity for an inevitable compromise between Marxist-Leninist values and those of traditional American democratic capitalist society.

· Abnegation of American leadership and sovereignty in favor of promises of multilateralism in which the U.S. role would be marginalized. Reliance on the United Nations, where a plethora of corrupt, demagogic, and unrepresentative voices dominated, was seen as an alternative to the exercise of American power. NATO, the most successful alliance in history, was either opposed or at every turn sought to be sabotaged.

· A blind faith in negotiations for their own sake, with authoritarian regimes that do not know the meaning of compromise. The use of force in international relations was seen as a violation of the moral code; the concept of even a war of defense against evil forces was questioned. Instead, naïve solutions were sought to problems which had long decades of complex history.

· A blind faith in technology, achieved through accumulating large bodies of statistical “fact,” as a replacement for detailed knowledge and historical perspective and judgment. It is the “scientism” that the philosopher William James warned us about more than a century ago. This was reflected often in a marriage of convenience with the diplomatic corps, which for whatever its skills at protocol and the “modalities” of negotiation, falls a perfect victim of what the French call “déformation professionelle.” Foggy Bottom has rarely had a strong claim to a realistic view of the perils of international affairs.

The president has expounded repeatedly on almost all these theses, if not directly, then by indirection. Overturning the established order through “transformation,” as he has labeled it, is the order of the day for Obama and his close associates in either formal or informal positions of power. Where law and custom is contrary to their new concepts, a stretch of executive privilege and discretion is a major tool for trying to create a new order even if the legislative arm has demurred.

Yet, if we accept the hypothesis that a radical leftwing minority American leadership has reached the apex of its “long march” by capturing the presidency and Democratic Congressional leadership, it is by no means certain their victory is not pyrrhic. The fact that Obama’s once seemingly fanatical following among the so-called sophisticated young is turning away seems to be proof positive of the disaster that has overtaken the administration. The debacle of ObamaCare is so great as to deal the left a blow from which they cannot recover, at least in the near term.

And thus “the long march,” while a temporary victory, has led to such chaos at home and abroad that it is increasingly rejected by a traditionally complacent American body politic. Americans, falling back on legendary common sense, as always, will try to get on with the “pursuit of happiness” promised them in their fundamental political agenda. What is lacking for the moment is leadership out of the swamp.

*A version of this column is scheduled for publication December 16, 2013, at worldtribune.com and at http://yeoldecrabb.wordpress.com/