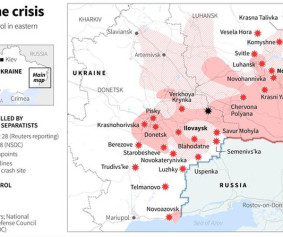 One of the iconic photographic images of recent decades was the film of a young Chinese man standing in front of the lead tank of an armored column on its way to crush the pro-democracy demonstrators in Tiananmen Square in Beijing.  The tank driver apparently had a conscience and refused to run over the protester.

It is reported that the people of Mariupol, Ukraine, are forming a human shield to protect their city from the oncoming Russian troops and armored vehicles.  If this is so, it will be seen if the columns stop or if they continue on through the unarmed civilians.  In any case, Russia is now in open violation not only of its own pledges to respect Ukrainian territorial integrity in the Budapest Agreement of 1994, but of every tenet of international law concerning armed conflict between states.  Of course, it has been in violation of such agreements and tenets since it occupied the Crimean peninsula in June, but that conquest at least was bloodless.

It now remains to be seen if the western world–Europe and The United States–will do anything about it.  So far, the West has threatened more sanctions but has not actually declared them.  The Ukrainian army desperately needs heavy weaponry, but none appear to be forthcoming.  Indeed, German Chancellor Merkel has suggested that Ukraine might want to join the fledgling “Eurasian Union,” a Putin-inspired grouping involving Russia, China, Khazakstan and Belarus, and that that might appease Russia and stop the fighting.

The Ukrainians were understandably outraged; but the German attitude is really not so surprising, since Germany has recently been engaged in a uncomfortable juggling act between its increasingly weak European allies and its dependence on Russian energy and the Chinese market.  Indeed, strong hints have been issuing from Berlin that Germany might join the Eurasian Union, at least as an observer.

If the West does nothing effective to convince Russia to withdraw from Ukraine, it will effectively be the end of NATO as a military force and the European Union as a political player in its neighborhood.  What does this mean for Israel?  It is being said that Israel has no dog in that fight, but it should be obvious that upholding the principle of non-intervention must be a central pillar in Israeli foreign policy.

On a more optimistic note there are credible reports that Saudi Arabia massed troops on the border with Qatar and that the Qatari emir flew to Riyadh to declare his total submission to King Abdullah, promising to cease supporting the Muslim Brotherhood, Hamas, Islamic Jihad and Hezbollah, among other terrorist groups.  The Saudis, along with the UAE and Bahrain, had already withdrawn their ambassadors from Qatar, but that symbolic action had not resulted in a change in Qatari behavior.

If these reports are confirmed, the terrorist organizations involved will lose an important source of funding and become more dependent on the remaining state sponsors of terrorism in the region, Turkey and Iran.  Interestingly, in the face of terror-supporting Qatari behavior, the U.S. recently signed an $11 billion weapons sale to Qatar, obviously far beyond anything the tiny Qatari armed forces could use, and thus intended by Doha for shipment to its favorite terrorist charities.

* Norman A. Bailey, Ph.D., is Adjunct Professor of Economic Statecraft at The Institute of World Politics, Washington, DC, and teaches at the Center for National Security Studies and Geostrategy, University of Haifa.  A version of this column was published in Globes Israel on September 1, 2014.