Right: “Didn’t I warn those Satan worshipers that I am their worst nightmare? Why are they surprised that the Pentagon fears me?”

I am not a Kremlinologist, and Kremlinology sort of went out of fashion with the collapse of the Soviet Union.

But I always enjoyed the speculation that Kremlin-watchers were so good at. Who lined up on top of reviewing stand in Red Square during military parades; who was missing; who said what to whom? These and countless other outward signs were diagnosed and re-diagnosed ad nauseam, but sometimes the Kremlin-watchers got it right.

Should we be doing that again now? There is clearly something big going on in Russia. Is Putin listening to the hard-line faction, or is he (or was he) trying to promote a different option?

Putin took himself to New York not just to tell the UN what he intended to do in Syria, but more importantly to make a case to Obama about what both of them should do. Obama rejected Putin’s appeal, and matters continue to deteriorate since then. The US accuses the Russians of bombing the CIA’s allies (among them plenty of radical Islamists) instead of bombing ISIS. The US drops 50 tons of weapons to the anti-Assad forces, poking a finger in Russia’s nose. The Russians send up their jets and buzz around American aircraft, not to mention violating Turkey’s air-space to make sure that Erdogan gets it and understands he is on the Russia hit list. And Putin calls in the Turkish ambassador for a two-hour lecture which ends in an expletive deleted type message to Erdogan, the gist of which is (as reported in the Russian press) “… tell your dictator president he can go to hell along with his ISIS terrorist[s] and I shall make Syria .. nothing [less than] a Big Stalingrad, for Erdogan and his Saudi allies are no [less] vicious than Adolf Hitler.”

For a long time the Russians have thought that the initiative in Syria to topple Assad is under the direction of the CIA, and that the US was not only pushing a program supported by Saudi Arabia and Turkey to overthrow Assad, but they were secretly in bed with ISIS. Why, Putin has repeatedly asked, has the United States not really bombed ISIS’s main targets in Syria? 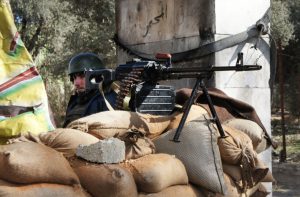 Indeed, the US posture is dauntingly confusing. The US has been supporting radical Islamic movements in Libya, Egypt, Iraq and Syria, and probably elsewhere. Most of the time CIA personnel are implicated in these operations, and Putin has hinted they know all about it. Why would America, threatened by al-Qaeda, ISIS and a host of other like-minded Islamic terrorists, do this? What is Washington’s game and, for that matter, the CIA’s game?

It would seem this is the core of the debate among Russian security experts. How do you explain America’s strange behavior, not really wanting to preserve the security system that emerged after the 1973 Yom Kippur War, and trying to undermine Russia’s interests in Libya and Syria? On a purely local level, why is the US providing TOW missiles (through its Turkish and Jordanian cut outs, but likely from Saudi stockpiles) to the Syrian opposition, which is Islamist and filled up with foreigners including Chechens? On an even more local level, why did the United States cynically allow the Boston Marathon bombings to happen, even though Russia gave America three clear warnings and pinpointed the prospective Boston bombers?

The Russians have been sorely disappointed before. During the Chechen wars, the US sided with the Chechens and criticized Russia’s heavy-handed tactics. Yet, in the Russian view, America’s tactics in the two Iraq wars and in Afghanistan have been just as brutal if not more so? And the enemy of both has been one and the same.

So the contretemps in the Kremlin is how to make sense out of what appears crazy, counterproductive, and dangerous to both sides. Is the United States so anti-Russian and do America’s leaders still have such a Cold War mentality that they are willing to sacrifice the existing security system in Europe and the Middle East? For what? Surely the Americans know that Russia still has only a small army and could hardly threaten Europe or the United States. So why the extreme anti-Russian stand of American leaders and politicians?

One suspects that Putin couldn’t any more figure it out than anyone else in Russia or the United States, but his hard-liners and military advisors are very uncomfortable. If the terrorists win in Syria, will Russia once again have to face severe trouble on its own territory? Will Russia lose face if Syria became an Islamic State? What about Iran? If it goes out of control, and Iranian rhetoric has alarmed Israel’s generals some of them pushing for action against Iran, the Russians will quickly find themselves out of the Middle East and unable to pursue military, political and economic objectives including, most importantly, oil exports.

If anything the last weeks have temporarily reinforced the hard-liners in the Russian government. For how long is anyone’s guess.

Meanwhile, Putin’s exasperation grows mightily. He now says that his Western partners, meaning the US and most specifically Obama, have “mush for brains.”