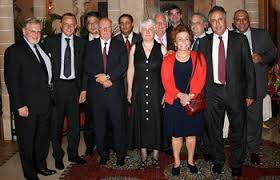 The ACD Team in Morocco

Read this report in a downloadable format.

On June 12, 2009, members of the American Center for Democracy observed municipal elections throughout Morocco, visiting polling sites in urban and rural areas.  We observed, without any obstacles, all the sites we chose and interviewed officials, party delegates and voters.  We witnessed a consistently high level of professionalism, a great sense of responsibility and a good knowledge of voting procedures on the part of the officials in the voting stations.  Without exception the elections met all the recognized requirements of a democratic election and members of the ACD observed only minor irregularities or violations.  The ACD was particularly impressed by the participation and engagement of women, both as voters and as electoral officials.

1. MEMBERS OF THE ACD OBSERVATION TEAM

2. POLLING STATIONS OBSERVED BY THE TEAM

Meknès-Tafilalet region
Sixty-three polling stations, accounting for 7.3% of the total polling stations of the Province of Meknès (860 polling stations) were observed in 13 different voting centers (11 in urban areas, 2 in rural areas) selected for their diversity:

3. GENERAL SUMMARY REGARDING THE ELECTORAL PROCESS

The pre-election planning and organization was of the very highest standard. The consistency of the voting procedures in each polling station indicated the level of prior training and the success of that training.

The elections were responsibly held, well managed, and executed correctly with fully transparency.

There was uniformity, a common standardized conduct of the election officials in all the poling stations observed.

The voting was done so in total privacy and without any influence.

The level of security was evident but sufficiently removed from the voting process. At no stage was it considered oppressive or coercive.

The enthusiasm for the voting process was recognizable especially amongst the female voters.  It was very encouraging to witness the females vote in such numbers and commitment.

In the sub Sahara region there was no interference or influence over the voting process by political groups inspired by the political differences between Morocco and Algeria.

The members of the local administration (specifically the governors and walis) placed their entire operational means at the disposal of members of the observation team.

No incident relating to the course of the voting operations was noted by the team nor reported to the observers.

4. TRENDS OBSERVED BY THE TEAM

In some polling stations, the election officials filled out final reports before the closure of the poll, “to save time”.

6. RECOMMENDATIONS TO IMPROVE THE ELECTION PROCESS

Article 62 of the Electoral Code says that in addition to the voter registration card each voter must verify his/her identity with his/her national identity card (CIN) or family record book.

The ACD team recommends that the family record book should not be used as proof of identity because it lacks photo I.D. In the absence of photo identification, the family book record can be used by third parties and opens the door for fraud. Therefore, the team suggests retaining the national identity card (CIN) as the sole document for proof of identity.

The ballots are not stamped with marks identifying the zone. Thus they can potentially lead to error and fraud

Moreover, the use of a pen for marking the vote does not allow for any error particularly among older voters. Increasing the number of invalid votes.

The ballots allotted to each polling station correspond to the exact number of registered voters. The services of the Governor preserve an additional reserve of 10% in the event of incidents, but these additional ballots are not at the immediate disposal of the polling stations.

The team observed, that the marking of the ballots was a major cause for invalidating votes – accounting for more than 20% of the invalid ballots – because the ballots were marked improperly. In certain cases, the ballots were declared invalid because of an inadequate folding (the electoral Code does not contribute to clarify this point since it provides – article 62, paragraph 2 – says that the voter must “fold” the ballot before placing it “folded” in the ballot box. However the ballots given to the voters are already partially folded.

We recommend three measures to improve the legitimacy of the votes:

a) Although the authorities and political parties invested time and effort to inform the voters on how to vote, clear instructions posted in the voting booths would help to reduce errors and invalid votes.

c) The marking method itself could be improved by using a pre-inked stamp or seal.

6.3 Delegates of the political parties

The team spoke privately with delegates from several political parties – some paid for their services, others volunteered. The presence of party delegates to monitor the election is a right provided by article 58 of the Electoral Code. However, not all parties have enough resources to allocate delegates to all polling stations.

Since Article 58 of the Electoral Code is an important to ensure transparency and accountability of the election, thus reinforcing the democratic process, the team suggests to provide all political parties a specific and uniform financial contribution of a minimal amount enabling them to ensure this right.

6.4 Orientation of the voters

The mission noted the useful presence, although rare, of an agent placed at the entry of the voting centers in charge of quickly directing the voters, specifically older people, towards the polling station corresponding to their registration on the electoral rolls.

This practical measure is relatively simple to implement, and makes it possible to considerably increase the fluidity of the voting process. In adverse cases, the mission noted that the absence of such an agent in the large school complexes comprising several polling stations slows down, and even disturbs the electoral process, in particular when officials of the polling stations stop their service in order to contribute to the orientation of the voters.

7. Conclusion: encouraging results, challenges for the next elections

The increasing participation of women in the political life is an obvious sign of democratic vitality. The election of Fatima Zahra Mansouri, a 33-year-old lawyer as Mayor in Marrakesh (the second female Mayor in Morocco) highlights the efforts carried out by the kingdom to increase the status of women on the democratic scene.

The election results show a high renewal rate of the municipal elected officials (61%).

The turnout rate, relatively stable since 2002, could be further encouraged by civic campaigns, better information to the public, and simplification of the voting procedure (especially on the ID and ballot issues).

Evolution of the turnout rate in 20 years

An important challenge for the success of future Moroccan elections lies in the ability to reduce the rate of the invalid votes (blank and null ballots). The invalid votes in Morocco account for about 10% in the local elections. In comparison the rate is 3.80% in France, and 2.60% in Spain. Several measures could significantly reduce this rate.

Evolution of the rate of blank and null votes

In contrast to Iran, Morocco’s recent vote marks a new degree of order, unity and tolerance. It is 131 degrees Fahrenheit in Marrakesh, Morocco, yet a slow but steady stream of voters–many of whom are women–enter the schoolyard to cast their ballots at the polling stations for the municipal elections. On June 12, 2009, 1,503 communities chose their representatives in orderly, transparent elections, according to Ahmed Herzenni, chairman of Morocco’s human…
Read More

The local elections that took place Friday in Morocco took place in “good conditions,” international observers who monitored the polling said on Saturday. “We were impressed because we’ve seen very clearly that people were well acquainted with the rules and were well prepared” for elections, Leslie Lebel, one of the international observers told Morocco’s Al Oula channel TV. “Everything took place in very good conditions,” she said. Jean…
Read More